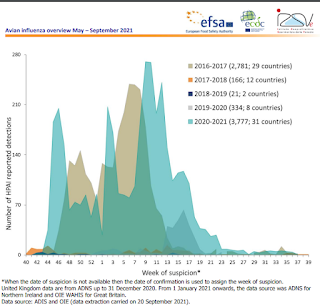 Comparing 5 Avian Flu seasons
#16,249
Although it is too soon to say what kind of avian flu season we will see this fall and winter, we are coming off a very active 2020-2021 season in Europe (see chart above) which showed - for the very first time - that the European H5Nx virus had zoonotic potential (see ECDC Threat Assessment Brief On 1st Identified Human Infections With Avian H5N8).

All viruses evolve over time, and we'd seen hints in recent years  that H5N8 - which emerged in 2014 - was moving towards a more `mammalian adapted' virus (see J. Virulence : Altered Virulence Of (HPAI) H5N8 Reassortant Viruses In Mammalian Models).

A week ago, in EID Journal: HPAI A(H5N1) Virus in Wild Red Foxes, the Netherlands, 2021, we looked at a report on mammalian infection - with neurological impacts - of red foxes with the European H5N8 virus.

While we'd seen examples of neurotropic infection with the Asian 2.3.2.1c-like H5N1 virus - in both humans (see CJ ID & MM: Case Study Of A Neurotropic H5N1 Infection - Canada) and mammals - this was a new and unexpected presentation with the European H5Nx 2.3.4.4b clade.
Yesterday, the CDC's EID Journal published another report - on the unexpected encephalitis and death of wild mammals infected with H5N8 at a UK animal rehabilitation center - in late 2020.

Once again, a wild fox, along with swans and seals, were involved. The authors describe their findings as both unusual, and unexpected.

Some excerpts from a much longer report follow. Click the link to read it in its entirety.  I'll have a brief postscript when you return.

We report a disease and mortality event involving swans, seals, and a fox at a wildlife rehabilitation center in the United Kingdom during late 2020. Five swans had onset of highly pathogenic avian influenza virus infection while in captivity. Subsequently, 3 seals and a fox died (or were euthanized) after onset of clinical disease. Avian-origin influenza A virus subtype H5N8 was retrospectively determined as the cause of disease.
Infection in the seals manifested as seizures, and immunohistochemical and molecular testing on postmortem samples detected a neurologic distribution of viral products. The fox died overnight after sudden onset of inappetence, and postmortem tissues revealed neurologic and respiratory distribution of viral products. Live virus was isolated from the swans, seals, and the fox, and a single genetic change was detected as a potential adaptive mutation in the mammalian-derived viral sequences. No human influenza-like illness was reported in the weeks after the event.

An episode of unusual disease resulting in deaths in different species at a wildlife rehabilitation center in the United Kingdom during late 2020 led to the retrospective detection of influenza A virus subtype H5N8 of avian origin in 5 mute swans, a fox, and 3 seals. The wildlife rehabilitation center admits >6,000 animals each year. New arrivals are initially housed in a quarantine facility upon admission. Four juvenile common seals (Phoca vitulina), 1 juvenile gray seal (Halichoerus grypus), and 1 juvenile red fox (Vulpes vulpes) died or were euthanized over a 2-day period. The fox died suddenly after a short period of nonspecific malaise and inappetence. The seals exhibited sudden-onset neurologic signs, including seizures before death or euthanasia (Figure 1).

This mortality event occurred ≈1 week after the deaths or euthanasia of 5 mute swans (Cygnus olor) held in isolation at the center because of acute-onset malaise and terminal seizures. The 5 swans were submitted for examination and testing under the Avian Influenza Wild Bird Surveillance Scheme (undertaken by the United Kingdom’s Animal and Plant Health Agency) (1), and they tested positive for highly pathogenic avian influenza A(H5N8) virus.

The unusual spatiotemporal cluster of unexplained death and neurologic disease in multiple avian and nonavian species warranted further investigation. Influenza of avian origin was not suspected in the fox and seals, and none of the other captive birds at the center showed any clinical signs of disease. The linkage between the mortality event in the swans and that observed in the fox and seals was not made until many weeks after the event, when the fox and seal tissues were assessed to attempt to define an etiologic diagnosis.

In conclusion, we determined that avian-origin influenza A(H5N8) virus caused severe disease and death in juvenile seals and a fox held in a wildlife rehabilitation center, in addition to swans that had also succumbed to the virus. All evidence suggests that the swans were the most likely source of infection for the fox and seals. The location of affected animals within the quarantine facility (Appendix Figure 1) suggests either aerosol or fomite spread as the likely cause of dissemination of infectious virus between cubicles.

Although the quarantine facility is designed to limit spread of infectious microorganisms through the use of good basic hygiene practices, it is not a biosecure facility designed to handle Biosafety Level 3 pathogens; as such, highly transmissible agents such as avian influenza may well spread even with some infection prevention measures in place. Because influenza infection was not suspected at the time of the event, biosecurity practices at the center may have been less effective at preventing spread compared with those implemented at a heightened level of biosecurity, which would likely have been in place had there been an awareness of the presence of influenza infection.

Determining the cause of disease in the seals and fox retrospectively was entirely reliant on collaboration between field veterinary services, pathologists, and virologists, and this case highlights the importance of wildlife disease surveillance.

Although genetic analyses indicated no increased risk for human infection with the H5N8 viruses in this outbreak, the investigation shows how these viruses may have unexpected and severe health risks for mammalian species. However, such spillover disease events in atypical host species constitute additional factors for veterinary authorities to consider during disease outbreaks and highlight the importance of wildlife disease surveillance that uses interdisciplinary and collaborative approaches.

Mr. Floyd is a veterinary pathologist working for the Animal and Plant Health Agency, UK. His main area of interest is pathology and surveillance for diseases of livestock.

While concerning, HPAI H5Nx viruses are a constantly moving target, and these viruses can gain - or lose -virulence, or other capabilities, over time.  Indonesia - once the world's hotspot for human H5N1 infection - has scarcely seen any cases in the past 5 years, and only a few going back a decade.

Their once problematic bird flu virus appears to have mutated into far less of a human threat.

What comes back to Europe this fall or winter may be milder, or potentially worse, than what came before.  And it is possible - after such strong avian epizootic last year - that Europe will be largely spared this winter as it was in the year after the 2016-2017 epizootic.

Trying to predict what the next flu season will bring is usually an exercise in futility.

Just because a virus can return, doesn't mean it will.  But we can't assume it won't, either.  So we'll watch the progress of HPAI in Europe, Asia, and yes - potentially even North America - this fall and winter, keeping our eyes open for any sign that these viruses are becoming more of a public health concern.

Posted by Michael Coston at 9:17 AM