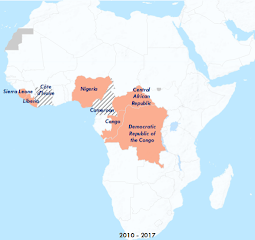 Beyond avian and swine flu, and now zoonotic coronaviruses, there are a number of emerging infectious diseases that we pay particular attention to, including Nipah (and Hendra), Viral Hemorrhagic Fevers, and Monkeypox.

Monkeypox, which is endemic in parts of West and Central Africa, has been on the ascendent for the past couple of decades, as immunity from long-discontinued smallpox vaccinations has waned.

In recent years we've seen sporadic exported cases - and even rarer secondary transmissions - reported in the UK, Singapore, Israel and the United States.

Although the primary animal reservoir for Monkeypox remains unknown, humans can become infected in the wild from an animal bite or direct contact with the infected animal’s blood, body fluids, or lesions, but consumption of under cooked bushmeat is also suspected as an infection risk.

Human-to-human transmission is also possible. This from the CDC’s Factsheet on Monkeypox:

Research over the past few years suggests that Monkeypox outbreaks are becoming more frequent, and getting larger, potentially increasing its threat to public health. A few recent reports include:

EID Journal: Reemergence of Human Monkeypox and Declining Population Immunity - Nigeria, 2017–2020
WHO Update & Risk Assessment On Monkeypox In The DRC

All of which brings us to a new Open Access systemic review in PLoS Neglected Tropical Diseases, which examines recent trends in the spread and epidemiology of Monkeypox, and finds the threat is growing.

Follow the link to read the full review, as I've only included a few excerpts.

Monkeypox, a zoonotic disease caused by an orthopoxvirus, results in a smallpox-like disease in humans. Since monkeypox in humans was initially diagnosed in 1970 in the Democratic Republic of the Congo (DRC), it has spread to other regions of Africa (primarily West and Central), and cases outside Africa have emerged in recent years.

We conducted a systematic review of peer-reviewed and grey literature on how monkeypox epidemiology has evolved, with particular emphasis on the number of confirmed, probable, and/or possible cases, age at presentation, mortality, and geographical spread. The review is registered with PROSPERO (CRD42020208269). We identified 48 peer-reviewed articles and 18 grey literature sources for data extraction.

Since 2003, import- and travel-related spread outside of Africa has occasionally resulted in outbreaks. Interactions/activities with infected animals or individuals are risk behaviors associated with acquiring monkeypox.

Monkeypox, a zoonotic disease caused by an orthopoxvirus, results in a smallpox-like disease in humans. We conducted a systematic review to assess how monkeypox epidemiology has evolved since it was first diagnosed in 1970 in the Democratic Republic of the Congo. In total, human monkeypox has now appeared in 10 African countries and 4 countries elsewhere. Examples include Nigeria, where the disease re-emerged in the last decade after a 40-year hiatus, and the United States, where an outbreak occurred in 2003.

The number of cases has increased at a minimum of 10-fold and median age at presentation has evolved from young children (4 years old) in the 1970s to young adults (21 years old) in 2010–2019. This may be related to the cessation of smallpox vaccinations, which provided some cross-protection against monkeypox. The case fatality rate for the Central African clade was 10.6% versus 3.6% for the West African clade.

Overall, monkeypox is gradually evolving to become of global relevance. Surveillance and detection programs are essential tools for understanding the continuously changing epidemiology of this resurging disease.