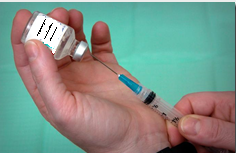 Although we never really know how good of a match each fall's flu shot - which must be formulated 6 months in advance - will be against currently circulating flu viruses, last September I pointed out that this year that matchup was `. .  . more up in the air than usual'.

The reason was simple.  For the 12 months prior to deciding on this year's flu vaccine components, influenza had been greatly suppressed by both the COVID virus, and our collective protective strategies (face masks, social distancing, etc.) against it.

As a result, flu virus samples submitted to reference laboratories in 2020-2021 were down by 99%, providing extremely limited data on their evolution over the past year (see ECDC: Influenza Virus Characterisation - July 2021).

While I still got the flu shot, I did so knowing the odds were against a good match.

By November we were starting to see reports of large outbreaks of influenza at colleges and universities (see here, here, and here) which led to a CDC investigation, followed by an MMWR Report, and the issuance of a HAN Advisory # 00458 that described the H3N2 viruses collected as being similar to - but genetically distinct from - this year's H3N2 vaccine component.

In December, we looked at a preprint Antigenic & Virological properties of an H3N2 Variant That Will Likely Dominate the 2021-2022 Influenza season, that further confirmed this mismatch.

Today we get a disappointing - but not unexpected - analysis showing that this year's flu vaccine provided very little (if any) protection against the H3N2 virus, which was by far the most common influenza A strain reported this year.

What is already known about this topic?

What is added by this report?

Based on data from 3,636 children, adolescents, and adults with acute respiratory infection during October 4, 2021–February 12, 2022, seasonal influenza vaccination did not reduce the risk for outpatient respiratory illness caused by influenza A(H3N2) viruses that have predominated so far this season.

What are the implications for public health practice?

CDC recommends influenza vaccination for as long as influenza viruses are circulating. Vaccination can prevent serious influenza-related complications caused by viruses that might circulate later in the season, including 2009 pandemic A(H1N1) and influenza B viruses.

In the United States, annual vaccination against seasonal influenza is recommended for all persons aged ≥6 months except when contraindicated (1). Currently available influenza vaccines are designed to protect against four influenza viruses: A(H1N1)pdm09 (the 2009 pandemic virus), A(H3N2), B/Victoria lineage, and B/Yamagata lineage. Most influenza viruses detected this season have been A(H3N2) (2). With the exception of the 2020–21 season, when data were insufficient to generate an estimate, CDC has estimated the effectiveness of seasonal influenza vaccine at preventing laboratory-confirmed, mild/moderate (outpatient) medically attended acute respiratory infection (ARI) each season since 2004–05. This interim report uses data from 3,636 children and adults with ARI enrolled in the U.S. Influenza Vaccine Effectiveness Network during October 4, 2021–February 12, 2022.
Overall, vaccine effectiveness (VE) against medically attended outpatient ARI associated with influenza A(H3N2) virus was 16% (95% CI = −16% to 39%), which is considered not statistically significant.
This analysis indicates that influenza vaccination did not reduce the risk for outpatient medically attended illness with influenza A(H3N2) viruses that predominated so far this season. Enrollment was insufficient to generate reliable VE estimates by age group or by type of influenza vaccine product (1). CDC recommends influenza antiviral medications as an adjunct to vaccination; the potential public health benefit of antiviral medications is magnified in the context of reduced influenza VE. CDC routinely recommends that health care providers continue to administer influenza vaccine to persons aged ≥6 months as long as influenza viruses are circulating, even when VE against one virus is reduced, because vaccine can prevent serious outcomes (e.g., hospitalization, intensive care unit (ICU) admission, or death) that are associated with influenza A(H3N2) virus infection and might protect against other influenza viruses that could circulate later in the season.

Although influenza virus circulation and laboratory-confirmed influenza associated hospitalizations declined from late December 2021 through January 2022, some regions of the United States have seen increases in influenza activity since that time.** Influenza activity is difficult to predict, and strategies to prevent influenza illness remain important to reduce strain on health care services. Vaccination against seasonal influenza might protect against other influenza viruses that could circulate later in the season and their potentially serious complications. Clinicians should consider diagnostic testing for patients with ARI, especially among hospitalized patients and those at increased risk for complications. All hospitalized patients and all outpatients at higher risk for serious complications from influenza should be treated as soon as possible with a neuraminidase inhibitor medication if influenza is suspected (5). Physicians should not wait for confirmatory influenza laboratory testing, and the decision to use antiviral medication should not be influenced by patient influenza vaccination status. Clinicians should be aware that influenza activity might continue or increase, and influenza should be considered as a possible diagnosis in all patients with ARI.

Since there was so little H1N1 activity, this analysis was unable to determine the shot's effectiveness against it.  As we may yet see a wave of H1N1, or influenza B, later this spring or summer, the shot may still offer some valuable protection.

In recent years seasonal H3N2 has diversified into multiple, rapidly mutating, subclades (see The Enigmatic, Problematic H3N2 Influenza Virus) making it particularly difficult to predict which will be dominant 6 months in advance.

Nevertheless, two weeks ago the WHO Recommended a 2022-2023 Northern Hemisphere Flu Vaccine Composition, one that closely matches the Southern Hemisphere flu shot that will be rolled in the coming months south of the equator.

Hopefully this summer we'll get a preview on how effective it is from the Australian and New Zealand Health departments as their winter flu season begins in May.

That said, with COVID still in the mix, it may be some time before we start seeing `normal' flu seasons.

Posted by Michael Coston at 2:40 PM