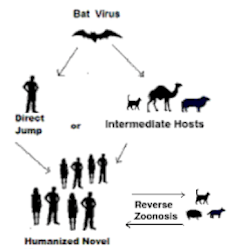 Although SARS-CoV-2 is incredibly well-adapted to humans, one of the topics we've revisited often over the past 2 years has been its spread to non-human hosts  (i.e. deer, mink, rodents, etc.) where the virus could conceivably take divergent evolutionary paths and produce new, potentially dangerous variants that could `spillback' into humans.

It's not a farretched concern. In fact, we've already seen it happen (several times).

In the fall of 2020 SARS-CoV-2 jumped from humans to farmed mink in Denmark, and began to mutate into new mink-variants (see Denmark Orders Culling Of All Mink Following Discovery Of Mutated Coronavirus).

Luckily, this emergency was relatively short-lived, as the Alpha variant emerged in Europe in late 2020 and quickly supplanted these mink-variants. But it did demonstrate the problem; carriage of SARS-CoV-2 by other host species can produce new variants, which can jump back into humans.

Fortunately, most farmed animals (pigs, chickens, cattle, etc.) are poor hosts for the SARS-CoV-2 virus - while dogs and cats appear only mildly susceptible - but biggest findings thus far have been in mink and North American White-Tailed Deer (WTD).  Some recent papers include:

And just over a week ago, we looked at a preprint from researchers in Ontario, Canada that described finding Highly divergent SARS-CoV-2 variants in WTD, and potential evidence of deer-to-human transmission.

While the COVID pandemic is showing hopeful signs of stabilization, five months ago in CCDC Weekly Perspectives: COVID-19 Expands Its Territories from Humans to Animals, we looked at warnings from two well-known Chinese scientists that the "The host expansion of SARS-CoV-2 is not over".

All of which brings us to a Joint Statement issued today by the WHO, FAO, and OIE on the importance of monitoring the spread of SARS-CoV-2 into non-human hosts, and the prevention of the formation of animal reservoirs.

Statement
As we enter the third year of the pandemic, SARS-CoV-2, the virus that causes COVID-19, is spreading between people at an intense level globally. There are many factors that are driving transmission. One of these is the emergence of highly transmissible variants of concern, the latest being Omicron. The virus continues to evolve and the risk of future emergence of variants is high.

Although the COVID-19 pandemic is driven by human-to-human transmission, the SARS-CoV-2 virus is also known to infect animal species. Current knowledge indicates that wildlife does not play a significant role in the spread of SARS-CoV-2 in humans, but spread in animal populations can affect the health of these populations and may facilitate the emergence of new virus variants.

In addition to domestic animals, free-ranging, captive or farmed wild animals such as big cats, minks, ferrets, North American white-tailed deer and great apes have thus far been observed to be infected with SARS-CoV-2. To date, farmed mink and pet hamsters have been shown to be capable of infecting humans with the SARS-CoV-2 virus and a potential case of transmission between white-tailed deer and a human is currently under review.

The introduction of SARS-CoV-2 to wildlife could result in the establishment of animal reservoirs. For example, it has been reported that, approximately one-third of wild white-tailed deer in the United States of America have been infected with SARS-CoV-2, initially via several human-to-deer transmission events. The SARS-CoV-2 lineages detected in white-tailed deer have also been circulating in close-by human populations. White-tailed deer have been shown to shed virus and transmit it between each other.

FAO, OIE and WHO call on all countries to take steps to reduce the risk of SARS-CoV-2 transmission between humans and wildlife with the aim of reducing the risk of variant emergence and for protecting both humans and wildlife. We urge authorities to adopt relevant regulations and disseminate previously released recommendations by FAO, OIE and WHO to (1) people working in close contact with or handling wildlife, including hunters and butchers; and (2) the public.Personnel working closely with wildlife should be trained to implement measures that reduce the risk of transmission between people and between people and animals, using WHO advice on how to protect oneself and prevent the spread of COVID-19, and OIE and FAO guidelines on the use of personal protective equipment (PPE) and good hygiene practices around animals, including good hygiene practices for hunters and butchers.

Current evidence suggests that humans are not infected with the SARS-CoV-2 virus by eating meat. However, hunters should not track animals that appear sick or harvest those that are found dead. Appropriate butchering and food preparing techniques, including proper hygiene practices, can limit transmission of coronaviruses, including SARS-CoV-2, and other zoonotic pathogens.

FAO, OIE and WHO stress that the public should be educated about contact with wildlife. Some wild animals may come close to human settlements and residential areas. As a general precaution, people should not approach or feed wild animals or touch or eat those that are orphaned, sick or found dead (including road kills). Instead, they should contact local wildlife authorities or a wildlife health professional.

It is also crucial to safely dispose of uneaten food, masks, tissues, and any other human waste to avoid attracting wildlife, especially to urban areas and, if possible, keep domestic animals away from wildlife and their droppings.

Our organizations emphasize the importance of monitoring mammalian wildlife populations for SARS-CoV-2 infection, reporting results to National Veterinary Services (who report these findings to the OIE) and sharing genomic sequencing data on publicly available databases. Countries should also adopt precautions to reduce the risk of establishment of animal reservoirs and potential acceleration of virus evolution in novel hosts, which could lead to the emergence of new SARS-CoV-2 variants. Such measures will preserve the health of precious wildlife as well as humans.

We invite governments and other stakeholders to bring the contents of this joint statement to the attention of competent authorities and all parties concerned.

Just as camels continually reintroduce MERS-CoV to humans in the Middle East, and aid in its evolution, the creation of one or more animal reservoirs for SARS-CoV-2 could create an alternate breeding ground for new COVID variants with unpredictable results.
For more on this topic, you may wish to revisit: