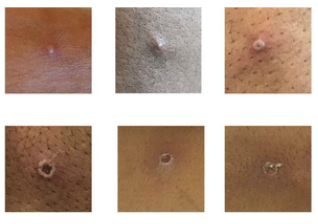 While I was temporarily offline upgrading my LINUX operating system, the UKHSA  announced the discovery of 4 more Monkeypox cases (3 in London, 1 linked case in the Northeast of the country), all without recent travel history to West or Central Africa.

While no direct links have been found between the 2 cases announced on Saturday, or the imported case reported on May 7th, new epidemiological information has surfaced suggesting how these 6 latest cases may have been infected.

All are men who self identify as gay, bisexual, or men who have sex with other men (MSM),  and common contacts have been identified for 2 of the 4 latest cases. According to the WHO the incubation period for Monkeypox is usually from 6 to 13 days but can range from 5 to 21 days.

While not normally considered contagious during its incubation period (see Modelling human-to-human transmission of monkeypox), that assumption is probably not based on the type of close contact common between sexual partners.

As we've learned with both Zika and Ebola, sexual transmission can sometimes occur even when someone isn't actively showing signs of illness. It is possible that we'll find that the same thing can happen with Monkeypox.

The good news in all of this is this outbreak is reportedly from  the `milder' West African clade of Monkeypox.  While the risk to the general public is probably quite low, it would not be surprising if more cases surface in the UK - and possibly elsewhere - in the days and weeks to come.

The UK Health Security Agency (UKHSA) has detected 4 additional cases of monkeypox, 3 in London and one linked case in the north east of England.

The 4 new cases do not have known connections with the previous confirmed cases announced on 14 May and the case announced on 7 May.

Investigations are underway to establish links between the latest 4 cases, who all appear to have been infected in London. All 4 of these cases self-identify as gay, bisexual or other men who have sex with men (MSM).

Currently, common contacts have been identified for 2 of the 4 latest cases.

There is no link to travel to a country where monkeypox is endemic, and exactly where and how they acquired their infections remains under urgent investigation, including whether they have further links to each other.

Those patients needing medical care are all in specialist infectious disease units at the Royal Free Hosptial, Royal Victoria Infirmary in Newcastle upon Tyne and Guys’ and St Thomas’. The individuals have the West African clade of the virus, which is mild compared to the Central African clade.

These latest cases mean that there are currently 7 confirmed monkeypox cases in the UK, diagnosed between 6 and 15 May.

Due to the recent increase in cases and uncertainties around where some of these individuals acquired their infection, we are working closely with NHS partners to identify if there may have been more cases in recent weeks, as well as international partners to understand if similar rises have been seen in other countries.

Monkeypox is a viral infection usually associated with travel to West Africa. It is usually a mild self-limiting illness, spread by very close contact with someone with monkeypox and most people recover within a few weeks.

The virus does not spread easily between people and the risk to the UK population is low. However, the most recent cases are in gay, bisexual and other MSM communities, and as the virus spreads through close contact, we are advising these groups to be alert to any unusual rashes or lesions on any part of their body, especially their genitalia, and to contact a sexual health service if they have concerns.

Anyone with concerns that they could be infected with monkeypox is advised to make contact with clinics ahead of their visit. We can assure them their call or discussion will be treated sensitively and confidentially.

This is rare and unusual. UKHSA is rapidly investigating the source of these infections because the evidence suggests that there may be transmission of the monkeypox virus in the community, spread by close contact.

We are particularly urging men who are gay and bisexual to be aware of any unusual rashes or lesions and to contact a sexual health service without delay.

We are contacting any potential close contacts of the cases to provide health information and advice.

Clinicians should be alert to individuals presenting with rashes without a clear alternative diagnosis and should contact specialist services for advice.

Initial symptoms of monkeypox include fever, headache, muscle aches, backache, swollen lymph nodes, chills and exhaustion. A rash can develop, often beginning on the face, then spreading to other parts of the body including the genitals.

The rash changes and goes through different stages, and can look like chickenpox or syphilis, before finally forming a scab, which later falls off.

Posted by Michael Coston at 3:25 PM