WHO Update: MERS-CoV In Oman 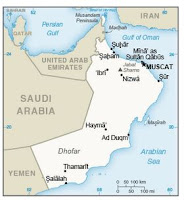 #16.756
Saudi Arabia - which has reported roughly 90% of the MERS-CoV cases in the Middle East since it emerged in 2012 - has been conspicuously silent on any new infections since last December (see WHO Update: Middle East Respiratory Syndrome Coronavirus (MERS-CoV) – Saudi Arabia).

But today we have the 2nd MERS update from a neighboring country in a week (see Qatar report); this time from Oman.

As we've discussed previously, detecting MERS-CoV cases can be challenging, even when countries are actively looking for cases. A task has which has admittedly become even more difficult due to the COVID pandemic.

But the reality is that some countries have been hesitant - or slow - to investigate and/or report cases, and it is assumed that the roughly 2,600 known cases over the last decade represent a significant under-count (see EID Journal: Estimation of Severe MERS Cases in the Middle East, 2012–2016).
We have the latest WHO update below, after which I'll return with a brief postscript.

Middle East respiratory syndrome coronavirus - Oman
17 May 2022
Situation at glance
On 28 April 2022, WHO was notified of a case of Middle East Respiratory Syndrome Coronavirus (MERS-CoV), in a 34-year-old male, from Al Dhahira Governorate in Oman. The case had a history of direct contact with animals including dromedaries, sheep and goats at his family farm in Oman. The condition of the case remains critically unstable. As of 28 April, a total of six close community and 27 health care workers had been listed as contacts and were followed for 14 days from the date of last exposure with the case. No secondary cases have been reported to date.

On 28 April 2022, the National IHR Focal point of Oman notified WHO of one case of MERS-CoV from Al Dhahira Governorate in Oman.

The case, a 34-year-old male, non-health care worker who is a resident of Al Dhahira Governorate, developed symptoms including shortness of breath, high-grade fever, and dry cough on 18 April which lasted for six days. On 24 April, he was taken to the emergency department of a hospital. Upon examination and assessment, he was found to be in severe respiratory distress, febrile, and hypotensive and diagnosed with clinical pneumonia with fluid collection in the lungs and was admitted to the isolation ward. The condition of the patient deteriorated, and he was immediately transferred to a negative pressure isolation room, in the medical ward on the same day. On 25 April, his condition worsened, and he was then transferred to an isolation room in the Intensive Care Unit (ICU) and placed on mechanical ventilation. Respiratory samples were tested for several viral pathogens, including severe acute respiratory syndrome coronavirus (SARS-CoV) and Mycobacterium tuberculosis. A sepsis workup including blood and urine tests was performed and tested positive for MERS-CoV by reverse transcription polymerase chain reaction (RT-PCR) on 27 April.

Epidemiology of the disease

Middle East respiratory syndrome (MERS) is a viral respiratory infection that is caused by a coronavirus called Middle East Respiratory Syndrome Coronavirus (MERS-CoV). Infection with MERS-CoV can cause severe disease resulting in high mortality. Approximately 35% of patients with MERS have died, but this may be an overestimate of the true mortality rate, as mild cases of MERS-CoV may be missed by existing surveillance systems and until more is known about the disease, the case fatality rates are counted only amongst the laboratory-confirmed cases.

Humans are infected with MERS-CoV from direct or indirect contact with dromedary camels who are the natural host and zoonotic source of the MERS-CoV infection. MERS-CoV has demonstrated the ability to transmit between humans. So far, the observed non-sustained human-to-human transmission has occurred among close contacts and in health care settings. Outside of the healthcare setting there has been limited human-to-human transmission.

MERS-CoV infections range from showing no symptoms (asymptomatic) or mild respiratory symptoms to severe acute respiratory disease and death. A typical presentation of MERS-CoV disease is fever, cough and shortness of breath. Pneumonia is a common finding, but not always present. Gastrointestinal symptoms, including diarrhoea, have also been reported. Severe illness can cause respiratory failure that requires mechanical ventilation and support in an intensive care unit. The virus appears to cause more severe disease in older people, persons with weakened immune systems and those with chronic diseases such as renal disease, cancer, chronic lung disease, and diabetes.
No vaccine or specific treatment is currently available, although several MERS-CoV specific vaccines and treatments are in development. Treatment is supportive and based on the patient’s clinical condition.

Public health response
WHO risk assessment
Cases of MERS-CoV infection are rare in Oman. Since June 2013, a total of 25 MERS-CoV cases, including the current case, and seven deaths, have been reported to WHO from Oman.

The notification of this case does not change the overall risk assessment for MERS. It is expected that additional cases of MERS-CoV infection will be reported from the Middle East and/or other countries where MERS-CoV is circulating in dromedaries, and that cases will continue to be exported to other countries by individuals who were exposed to the virus through contact with dromedaries or their products (for example, consumption of camel’s raw milk), or in a healthcare setting.

WHO continues to monitor the epidemiological situation and conducts a risk assessment based on the latest available information.

Prior to the emergence of COVID in late 2019, MERS-CoV was at the very top of our coronavirus worry list. While not nearly as transmissible as SARS-CoV-2, MERS-CoV does appear to have a much higher case fatality rate.

Past studies (see A Pandemic Risk Assessment Of MERS-CoV In Saudi Arabia) have suggested the virus doesn't have all that far to evolve before it could pose a genuine global threat.

All reasons why we need to be doing a much better job looking for cases, and reporting them promptly.  Otherwise, we risk being blindsided by the next global health threat.
Again.
Posted by Michael Coston at 5:19 AM