Over the weekend Chinese media have been reporting that outpatient clinics are filled with suspected flu patients, often queuing up overnight, and that oseltamivir (aka Tamiflu) is in short supply in many places.

According to the latest report from China's National Influenza Center (NIC), this flu outbreak is predominantly A/H3N2, and almost all of the activity is centered in the Southern half of the country.  While not entirely unheard of (we saw an outbreak in the summer of 2017), large influenza epidemics on the Mainland are uncommon during the summer months (see chart below). 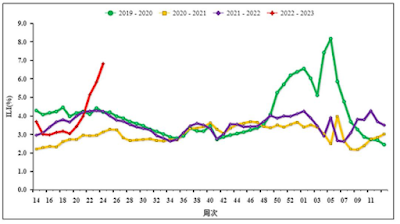 From this week's NIC report:

In the 24th week of 2022, a total of 6,542 influenza-like case surveillance samples were detected by the influenza surveillance network laboratories nationwide (excluding Hong Kong, Macao and Taiwan regions, the same below).

While China hasn't publicly acknowledged an HPAI human infection since late April, this update informs us of 1 human infection with HPAI H5N6 and 1 with LPAI H9N2 in week 24.

All of this comes as China continues to battle (successfully, according to their NHC) against Omicron, with only 5 local cases (3 in Beijing and 2 in Shanghai) reported in their latest update.  Since China often releases bad news `strategically', these reports should be weighed accordingly.

Meanwhile, the surge in flu and COVID continues in Australia, with their latest (No. 06, 2022) update from the Australian Government showing influenza's impressive rise during the first half of June. 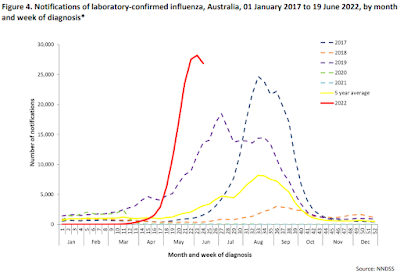 • Influenza-like-illness (ILI) activity in the community this year has increased since March 2022.

• In the year to date in 2022, there have been 147,155 notifications reported to the National Notifiable Diseases Surveillance System (NNDSS) in Australia, of which 55,101 notifications had a diagnosis date this fortnight.

• From mid-April 2022, the weekly number of notifications of laboratory-confirmed influenza reported in Australia has exceeded the 5 year average.

• In the year to date, of the 147,155 notifications of laboratory-confirmed influenza, 54 influenza-associated deaths have been notified to the NNDSS.

• Since commencement of seasonal surveillance in April 2022, there have been 989 hospital admissions due to influenza reported across sentinel hospitals sites, of which 6.1% were admitted directly to ICU.

Despite the slight downward hook shown in the last 2 weeks - which may simply indicate a lag in reporting -  it is too soon to know if Australia's flu season has peaked.
The return of influenza A at the same time that a new wave of (BA.4/BA.5) Omicron is gaining momentum around the globe complicates matters for everyone.

Not only does it increase the possibility of seeing potentially severe dual infections (influenza and COVID), it will make it much harder to differentiate between flu and COVID infections.

Influenza seasons are highly unpredictable, and what happens now in China or in the Southern Hemisphere doesn't guarantee a harsh season for Northern Hemisphere this fall.

But between presumed low community immunity to influenza after 2 years of social distancing - and what we can see happening elsewhere in the world - I certainly wouldn't bet against it.

Posted by Michael Coston at 7:17 AM