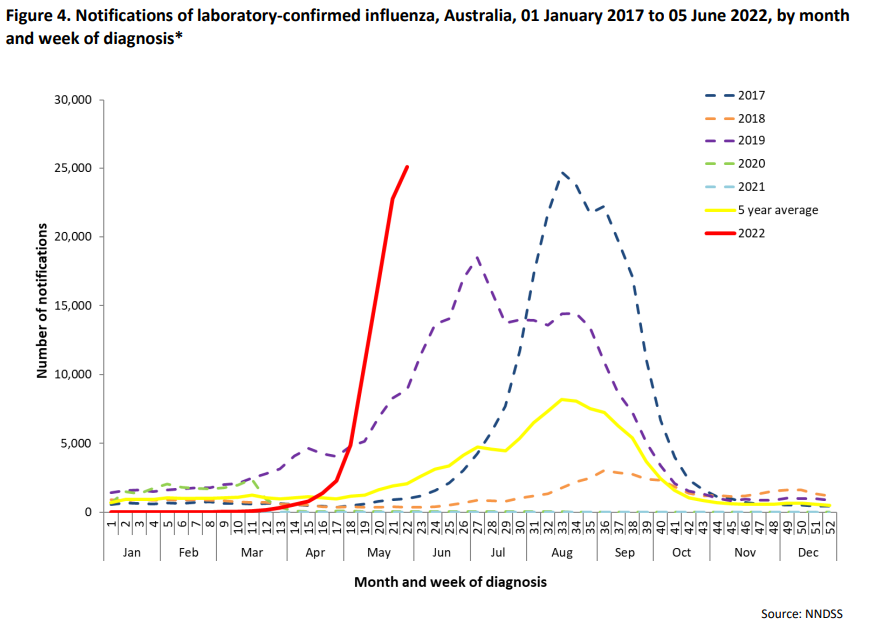 Three weeks ago, in Australia: Queensland Announces Free Flu Shots for All As Seasonal Flu Strikes Early, we looked at early indications that Australia was heading towards an epic rebound in influenza after a two-year lull due to the COVID pandemic.

Community immunity to seasonal influenza is believed to be fairly low, and the effectiveness of this year's flu vaccine has yet to be field tested (note: the vaccine they are deploying now is nearly identical to the vaccine we'll be using next fall).

Add in the recent arrival of the more transmissible COVID Omicron variants BA.4 and BA.5, and there are legitimate concerns over a `messy' winter respiratory virus season down under.  Australia may be the first nation to see a full-fledged flu season since the coronavirus pandemic emerged. 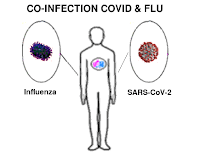 While the Southern Hemisphere's flu season doesn't always tell us what kind of flu season the Northern Hemisphere can expect next fall, it can still be probative. And this year - with the co-circulation of influenza and COVID - we will be watching with extreme interest.

While Australia's flu season often doesn't get started until June or July, overnight the Australian press has been reporting that the number of flu cases recorded during the month of May was twice the previous record.

Australia's Department of health has published their most recent bi-weekly influenza report (see below), which hints at the potential magnitude of their winter flu season.  I've only posted some excerpts, so follow the link to read it in its entirety.
I'll return with a brief postscript after the break.

• Influenza-like-illness (ILI) activity in the community this year has increased since March 2022.

• In the year to date in 2022, there have been 87,989 notifications reported to the National Notifiable Diseases Surveillance System (NNDSS) in Australia, of which 47,860 notifications had a diagnosis date this fortnight.

• From mid-April 2022, the weekly number of notifications of laboratory-confirmed influenza reported in Australia has exceeded the 5 year average.

• In the year to date, of the 87,989 notifications of laboratory-confirmed influenza, 27 influenza-associated deaths have been notified to the NNDSS.

• Since commencement of seasonal surveillance in April 2022, there have been 733 hospital admissions due to influenza reported across sentinel hospitals sites, of which 6.1% were admitted directly to ICU.

• There is no indication of the potential impact of the 2022 season on society at this time.

• In 2022 to date, people aged 5–19 years and children aged younger than 5 years have the highest notification rates.

• It is too early to assess vaccine match and effectiveness for this season.

Still, any protection beats no protection at all. And with concerns over COVID co-infections, that may be truer than ever.

After two-plus years of COVID, the regular patterns of respiratory viruses have been disrupted around the globe, and we've seen numerous examples of `out-of-season' outbreaks of influenza, RSV, and other illnesses (see last summer's CDC HAN: Increased RSV Reports Across The Southern United States).
Even though the United States saw a mild, and abbreviated flu season last winter, we continue to see unusual levels of flu activity well into June (see FluView Report). 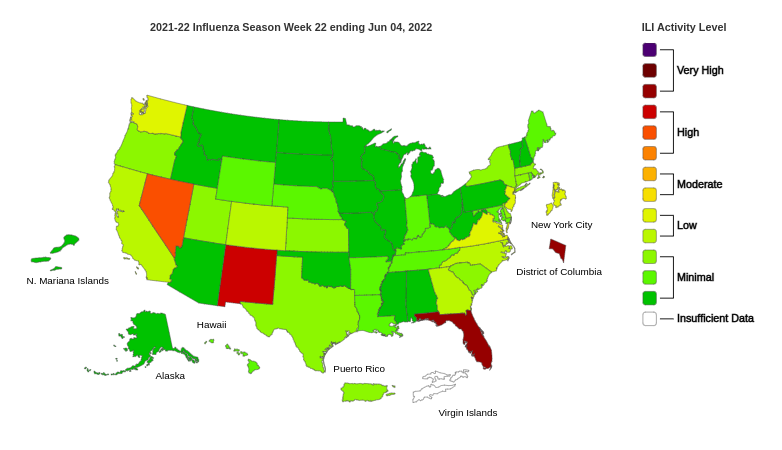 Influenza has always been notoriously unpredictable, and this year it appears more so than usual.  How this plays out is anyone's guess.
But it should be interesting.
Posted by Michael Coston at 7:38 AM