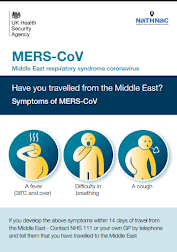 Seven days from now (July 7th) Saudi Arabia will host the first Hajj since COVID emerged in early 2020 - and while it will be smaller than in past years, and limited to those under the age of 65 - it will draw as many as 1 million people from countries all around the globe.

As we've discussed often, the Hajj - like many other mass gathering events - has the potential to amplify and disperse emerging and existing infectious diseases on a global scale (see J, Epi & Global Health: Al-Tawfiq & Memish On Hajj Health Concerns).

`Pneumonia is the leading cause of hospitalization at Hajj, accounting for approximately 20% of diagnoses on admission.’

But this year we also have the added concern of COVID, which is often indistinguishable from flu, MERS-CoV, and other respiratory viruses without testing.

While reports of MERS-CoV cases have plummeted since early 2020, it is not clear how much of that can be attributed to lapses in surveillance and reporting, and how much to an actual decline in cases.

Detecting MERS-CoV cases can be challenging, even when countries are actively looking for cases. A task has which has admittedly become even more difficult due to the COVID pandemic.

But the reality is that some countries have been hesitant - or slow - to investigate and/or report cases, and it is assumed that the roughly 2,600 known cases over the last decade represent a significant under-count (see EID Journal: Estimation of Severe MERS Cases in the Middle East, 2012–2016).

Given its high case fatality rate, and the recent trend of coronaviruses adapting to humans (SARS and SARS-CoV-2), MERS-CoV remains a credible threat.

Here is today's updated Risk Assessment from the UKHSA.

As of 16 June 2022, 2,591 cases of Middle East Respiratory Syndrome (MERS-CoV) have been reported by WHO, with at least 894 related deaths. The majority of MERS-CoV cases have been reported from the Arabian Peninsula, with one large outbreak outside this region involving 186 cases in the Republic of Korea (RoK) in 2015. Cases have been exported to other countries outside of the Middle East, including cases being identified in the UK and South Korea in August and September 2018 respectively.

On 22 August 2018, Public Health England (PHE) reported a laboratory-confirmed case of MERS-CoV infection in a resident of the Middle East who had travelled from Saudi Arabia. In response to this, public health measures were implemented including identification of exposed contacts and provision of health advice. This was the third imported MERS case reported by the UK; the previous case was reported in 2013 was associated with 2 infections in close contact.

Excluding the 2015 outbreak in RoK, the majority of reported cases of MERS-CoV worldwide have been from the Kingdom of Saudi Arabia (KSA).
MERS-CoV in Saudi Arabia

Outside of hospital outbreaks and smaller household clusters, reported cases are sporadic and usually occur in individuals with a history of contact with camels or camel products such as consumption of raw camel milk. The UK Health Security Agency (UKHSA, previously Public Health England) will continue to monitor the situation in KSA.
Risk assessment

The previous sporadic imported cases to the UK highlight the continued risk of imported cases to the UK, reflecting the epidemiology of MERS-CoV infection in the Middle East. It is therefore imperative that health professionals remain vigilant for clinical presentations compatible with Middle East Respiratory Syndrome. Early identification and rapid implementation of appropriate infection control measures for possible cases, and reporting of these to local health protection teams is crucial.

The risk of infection with MERS-CoV to UK residents in the UK remains very low.

The risk of infection with MERS-CoV to UK residents travelling to the Middle East is very low, but may be higher in those with exposure to specific risk factors within the region, such as camels (or camel products) or the local healthcare system.

Testing for MERS-CoV is warranted for persons who meet the possible case definition together with rapid implementation of appropriate infection control measures while awaiting results of testing.

The majority of outbreaks of MERS-CoV in the Middle East have been linked to healthcare settings. A previous WHO mission to Saudi Arabia concluded that gaps in infection control measures have most likely contributed to these outbreaks; this reinforced the importance of strict adherence to recommended infection control measures in healthcare facilities.

The risk to contacts of confirmed cases of MERS-CoV infection is low, but contacts should be followed up for 14 days following last exposure and any new febrile or respiratory illness investigated urgently for MERS-CoV.

Further information and guidance on MERS-CoV is available.
Travel advice

All travellers to the Middle East are advised to avoid contact with camels as much as possible:
The Hajj and Umrah

International pilgrims will be allowed to undertake the Hajj in 2022.

The last Hajj where large numbers of international pilgrims could attend was in 2019. There was no reported increase in travel-related MERS-CoV cases for this latest or previous Hajj pilgrimages. However, cases of MERS-CoV have been imported to countries outside of Saudi Arabia following return from Umrah, a separate pilgrimage which can be performed throughout the year, as illustrated by the most recent Malaysian case.

UKHSA remains vigilant and closely monitors developments in the Middle East and in the rest of the world where new cases have emerged and continues to liaise with international colleagues to assess whether our recommendations need to change.

NaTHNaC has published travel health advice for Hajj and Umrah.

Further information for health professionals on the possible MERS case definition is available.

Past studies (see A Pandemic Risk Assessment Of MERS-CoV In Saudi Arabia) have suggested the MERS virus doesn't have all that far to evolve before it could pose a genuine global threat.

Good reasons why we need improve surveillance and testing of cases, and the reporting of them promptly to WHO  Otherwise, we risk being blindsided by the next global health threat.

Posted by Michael Coston at 8:58 AM