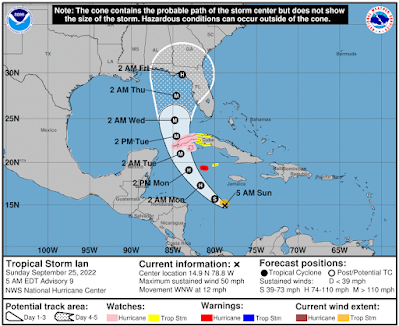 While the track of (potential) major hurricane Ian (now just a T.S.) has shifted slightly to the west since yesterday, models are still sharply divided on where this storm goes 4 days from now, with the heavily populated west coast of Florida still in play.

The further north this system goes before making landfall, the less favorable conditions are expected to become, so a weaker storm would be expected in the panhandle than we'd likely see here on the west coast.

The 5 am Discussion from the NHC describes the uncertainties in the forecast, then summarizes:

Ian is expected to remain a major hurricane when it moves generally northward across the eastern Gulf of Mexico during the middle of the week, but uncertainty in the long-term track and intensity forecast is higher than usual. Regardless of Ian’s exact track and intensity, there is a risk of dangerous storm surge, hurricane-force winds, and heavy rainfall along the west coast of Florida and the Florida Panhandle by the middle of the week, and residents in Florida should ensure they have their hurricane plan in place, follow any advice given by local officials, and closely monitor updates to the forecast. 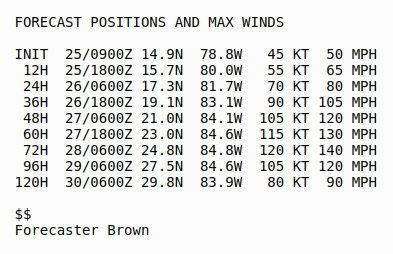 While this forecast assumes a north Florida landfall of a weakening (but still potent) storm, any turn to the right could bring a much more powerful storm into west central Florida.

Even if Ian stays off the coast, the further north this systems moves, the more its wind field is expected to expand. That could produce serious coastal flooding, and create widespread power outages across much of the peninsula.

While I may still be forced to evacuate, a more westerly track may allow me to safely stay home, although I could be without power, water, or internet for days. The last time we were under this much of a threat (see 2017's  A Post Irma Update), my power was out for 4 days, and store shelves were bare for more than a week.

Even though I maintain year-round preparedness, I spend extra time in May - just prior to hurricane season - making sure my supplies are topped off, and my equipment is in proper order.  Mostly that involves filling water storage containers with fresh water, and making sure all my rechargeable batteries are fully charted.

Since it has been 4 months, I spent yesterday charging my box of AA and AAA rechargeable batteries, doing laundry,  and packing and organizing some `bug out' bags in case I need them.

If I can avoid a direct hit by Ian, I'll probably only have to contend with `forced camping' in my home for a few days, something that I'm well equipped to do. 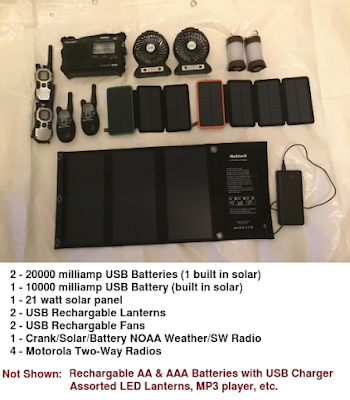 While these USB based systems won't run the air conditioner, refrigerator, or microwave, they can keep cell phones and tablets charged, provide light, fans, and even communications equipment running during an extended power outage. 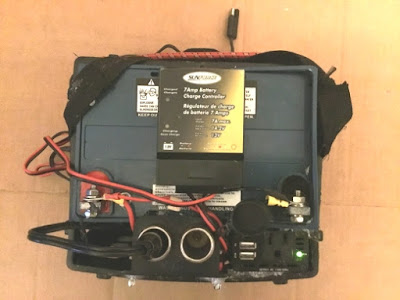 Each battery has its own dedicated solar charge controller with a snap connector for a solar panel, dual 12 volt outlets, and a 150 watt 110 volt inverter. my initial setup.

Although a CPAP can be run off the inverter, it is far more power efficient to run it off a 12 volt outlet (using the correct 12 volt adapter plug).  I should get 2 maybe 3  (7-hour) nights off a fully charged battery, and - with two batteries - my solar panels are likely able to keep up with keeping them charged.

While it would have been easier to by an off the shelf `solar generator' that would do (for under $1000) what all of my chargers/batteries/inverters can do, my system has the advantage of being modular and repairable. If I had to, I could cannibalize one system to fix the other.

In the preparedness community, the old saying is `One is none, and two is one'. Meaning you don't risk you life on having only plan A. Having a 1 year factory warranty on a new piece of technology is great, but it doesn't do you much good when the power is out, and your inverter starts smoking.

Of course, if you aren't comfortable building your own system, buying one off the shelf is your next best option.

Admittedly, many of my preps are more for comfort and convenience, than for survival. But the physical and psychological impacts stemming from the hardships following a disaster are quite real (see Post-Disaster Sequelae), and a modicum of creature comforts can go a long ways towards mitigating their effects.

But that can only happen if you plan ahead.

Posted by Michael Coston at 8:57 AM