September is National Preparedness Month, and so it seems an appropriate time to re-run some of the preparedness essays I’ve produced over the  years.

Today we turn to emergency communications using FRS radios.   This is a reprint of an essay that last appeared on this site in December of 2008.

Living aboard a boat was, at times, the ultimate in social isolation.

Sure, some days we'd gather on larger boats, or dockside, or on some isolated beach and kill some beers and tell some lies, but a lot of the time, we went days without direct human contact. But boaters just about all have a VHF radio aboard, and that was our link to one another.

Usually twice each day, in an anchorage of any size, we'd have a `radio roundup', where each boater would check in via the radio. If anyone needed anything, whether it was a recipe, a doctor, or a spare part, they could put out the call on the radio net.

Once `business' was taken care of, chit-chat ensued. With multiple channels available, Boater A would often call upon Boater B to `meet me on Channel X', and they could depart and talk without cluttering main channel. If a boater failed to check in, someone could row over and knock on their boat and make sure they were alright.

Sometimes, we had a rule that we'd do a personal check after a boater missed two consecutive radio checks.

While VHF radios are expensive, and overkill for most neighborhood settings, there is an easy alternative. FRS radio or Family Radio Service. These are not your father's walkie-talkies. They operate on a UHF band and are more reliable, and are less prone to static, than the old CB radio. And they are surprisingly inexpensive. 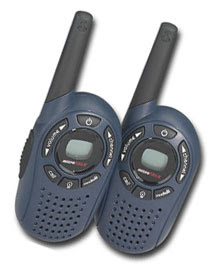 For home security, they can't be beat. One member of your household can be watching a back door, while you watch the front door, and you can communicate without shouting. Or one person can go outside to check out a perceived threat, bring in supplies, or assist a neighbor and remain in communications with the folks in the main house.

During a pandemic, or any other local or national emergency, they would be an essential tool. Highly recommended.

These units can be purchased at WalMart, Best Buy, Circuit City, or practically any major department store. You can also order them online.

Set up your own radio net meeting schedule (say 8am and 8pm) and make sure everyone is accounted for. If power is available, and you elect to go with the rechargeable units, you can leave them on standby and in the charger 24/7, and anyone can holler if they have a problem.

While the claims of a 5 mile or 8 mile range should be taken with a large grain of salt (think boulder-sized), they are pretty effective for up to 1 mile. As with most things, the more you pay, the more you get.

FRS radios do not require a license.

You may operate on up to 14 channels with an output of 1/2 watt. Some FRS radios (like mine) also give you an additional 8 channels of GMRS (General Mobile Radio Service) which may utilize up to 5 watts of power. YOU DO NEED A LICENSE to operate on the GMRS bands. But the range of communication will be several time farther than FRS.

If you buy a hybrid unit, you do not need a license to use the lower 14 channels.

While 14 channels may not seem like a lot, each channel can incorporate up to 38 different `privacy codes', which can block the reception of others on your channel. These CTCSS (Continuous Tone Coded Squelch System) codes effectively give you 532 channels of operation, if you desire. Just set up a common code for your radio net, and you won't hear other's and it is likely that other's won't hear you.

This is not `secure-comms', because anyone with an FRS radio can turn off this feature and hear all traffic on any channel.

Most units also provide a channel scan feature, which will pick up traffic on all 14 channels. Other features (dependant on price) include built in GPS, battery indicators, backlighting of dial, VOX support, ear buds, and even vibrating alert.

You other big decision will be the power source. Most units come with rechargeable batteries and a a duel charging stand. You will need 110 volt power, or a battery/inverter setup to keep these charged.

You can also buy units that run off of AAA batteries, in which case you will need lots of replacement batteries. Talk time on disposable batteries is reportedly between 20 and 30 hours. Use the higher output GMRS bands, and that will go down.

As I have a solar panel/battery/inverter setup I elected to go with the charging stand.