USDA Listing Of Animals With H1N1

Over the past couple of months we’ve heard of a number of instances here in the United States, and around the world, of animals infected with the H1N1 2009 pandemic virus.

Today we get a list from the  USDA of animals in the US that have tested positive for the virus.  Aside from humans and swine (16), the USDA lists ferrets (5), cats(3), turkeys (5), and a Cheetah (1) as having contracted the virus.

A hat tip to Farmer on FluTrackers for posting this link. 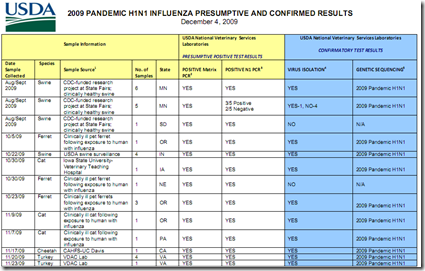 The infection of swine with an H1N1 swine-like virus isn’t unexpected, nor is the susceptibility of ferrets a big surprise.  Ferrets are often used in influenza research because they are susceptible to the virus.

The jumping to cats is a bit more surprising, given that the only other flu virus known to affect cats is the H5N1 bird flu.

The susceptibility of turkeys, given that research over the summer stated that they were not likely to acquire the virus, is perhaps the biggest surprise (see US: Turkey Farm Reports H1N1).

The promiscuous nature of this novel H1N1 continues to raise concerns, something that the Reveres at Effect Measure discussed last week (see Dogs, cats and swine flu's promiscuity).

Not included (yet) in the above list is the report today of 2 cats, from different households in Colorado, that have tested positive for the virus.

Two cats from different households in Colorado have tested positive for the H1N1 virus, or “swine flu,” according to Colorado State University's Veterinary Diagnostic Laboratory.

The cats are expected to recover but their cases serve as a reminder to pet owners to seek treatment for animals that appear to be ill. Veterinarians believe that both cats became ill after a person in their household contracted the virus.

The feline cases come after H1N1 has been identified in ferrets, birds and other cats in the United States.

Posted by Michael Coston at 8:04 PM