Midday on Friday is when we expect the CDC’s Key Flu Indicators and FluView Report, and today is no exception.

Influenza activity remains near the same levels as reported over the past several week; below normal.

There are some signs of increasing activity in 3 of the 10 U.S. Regions (4,7, and 9), and there has been a slight uptick in the P&I mortality rate, but it still remains below the epidemic threshold for this time of year.

A few excerpts, then, from today’s FluView report.  Follow the link to read it in its entirety.

During week 11 (March 14-20, 2010), influenza activity remained at approximately the same levels as last week in the U.S.

WHO and NREVSS collaborating laboratories located in all 50 states and Washington, D.C. report to CDC the number of respiratory specimens tested for influenza and the number positive by influenza type and subtype. The results of tests performed during the current week are summarized in the table below. 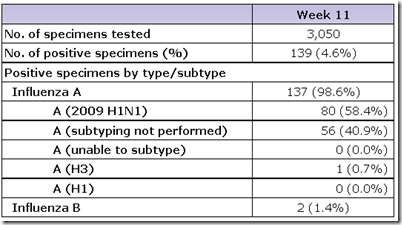 During week 11, 7.7% of all deaths reported through the 122-Cities Mortality Reporting System were due to P&I. This percentage was below the epidemic threshold of 7.8% for week 11.

One influenza-associated pediatric death was reported to CDC during week 11 (Mississippi) and was associated with an influenza A virus for which the subtype was undetermined. This death occurred during week 9 (the week ending March 6, 2010).

Geographic Spread of Influenza as Assessed by State and Territorial Epidemiologists: 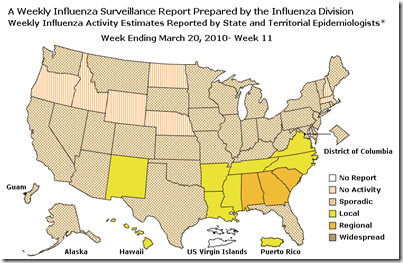 UK Academy Of Medical Sciences: Looking Ahead To COVID-19 Over Winter 2021/22 & Beyond