Just as the CDC on this side of the pond is promoting their GET SMART about antibiotics campaign, countries across Europe each year promote European Antibiotic Awareness Day during the week of November 18th.

This year the European campaign is promoting the prudent use of antibiotics in hospitals; meaning that antibiotics are only used when they are needed, with the correct dose, dosage intervals and duration of the course.

To coincide with this campaign, the ECDC and EMEA have released a 54 page joint technical report called:

The Bacterial Challenge: Time To React 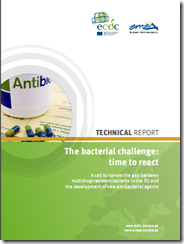 The main findings from the executive summary include:

The ECDC posted the following press release on their website, regarding this awareness campaign, and release of information.

With annually up to 400,000 patients [1]reported to suffer from infections resistant to multiple antibiotics, the data show that antibiotic resistance remains a public health problem across the European Union. In Klebsiella pneumoniae, a common cause of infection amongst hospital patients, an emerging trend is the proportion of resistance to powerful last-line antibiotics, such as carbapenems.

Proportions of resistance range from less than 1% to more than 25%. Without effective last-line antibiotics, doctors face the dilemma of not having any treatment options left.

However the news is not all gloomy. European-wide surveillance data from EARS-Net – a network coordinated by ECDC – show that a significant number of countries have reported decreasing trends for MRSA for the second consecutive year.

Notwithstanding, we are seeing increasing multi-drug resistance and the emergence of resistance to last-line antibiotics in European hospitals which we must take urgent action to address.”

Reuters has a good report today on all of this, including an interview with Dominique Monnet of the ECDC who expressed deep concern over the spread of NDM-1 (New Delhi metallo-beta-lactamase) and other resistant bacteria.

He is quoted as saying, "I know people are calling this NDM-1 a superbug, but for me NDM-1 and bacteria like it are more than superbugs. We're talking about super superbugs."

The concern over these resistant bugs was palpable and increasing practically every day - even before NDM-1 appeared on the scene.

Now, with many of these new resistance genes residing on a plasmid — a snippet DNA  that has the potential to jump to other strains of bacteria – concerns are escalating even faster than before.

You can read my recent report on KPC and NDM-1 in Carbapenemases Rising.

For more on the CDC’s  GET SMART program, visit their website at http://www.cdc.gov/getsmart/. 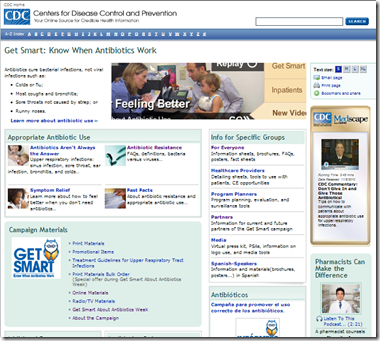 Posted by Michael Coston at 4:19 PM