With the reactor crises in Japan still front page news – and likely to remain so for months – naturally there is concern in this country, and around the world, about how radioactive releases may affect our health.

Although there are – according to this New York Times Article – many daunting challenges in the way of safely shutting these reactors down, for now at least, the levels of radiation released from the Fukushima facility do not pose a public health hazard beyond Japan.

Given the often breathless media reporting on the (real and imagined) public health threats posed by radiation being dispersed from these damaged plants, an occasional reality check is advisable.

To that end, the CDC maintains a webpage on Radiation Emergencies, which includes a number of Fukushima specific pages.

Although low levels of radioactive iodine 131 have been detected in the United States (and globally), the levels remain well below the level of public health concern.

Due to public interest in the matter, the CDC has released a new Q&A on radioactive iodine in milk:

Is it safe to drink milk?

Yes. People do not need to stop drinking milk because of concerns about radiation at these low levels. The levels of Iodine-131 found in milk are extremely low, and many times less than the FDA intervention level.

What are the levels that would start to affect my thyroid?

The level of Iodine-131 that would affect thyroid health depends on many factors. The developing fetus, newborns, infants, and young children are particularly sensitive to iodine-131. The FDA’s level for intervention is conservative and provides a large safety margin to protect public health.

How long will there be traces of iodine-131 from Japan in milk?

Given the uncertainty related to the nuclear reactors in Japan, we don’t know how levels of Iodine-131 currently seen in milk may change over time. However, we do know that Iodine-131 becomes less radioactive quickly in the environment. We are continuing to monitor milk so that we know when levels go up or down.

Are there any groups of people that are especially sensitive to iodine-131?

The developing fetus, newborns, infants and young children are particularly sensitive to iodine-131. However, levels being measured now are still many times below the FDA intervention level, even for these groups.

Why does Iodine-131 collect in milk?

Airborne Iodine-131 that deposits on pastures may be consumed by dairy cows.  A portion of the Iodine-131 consumed by a cow would then be transferred into the cow's milk.

Should I drink goat’s milk or other types of milk?

Historically, when cow’s milk has been affected by Iodine-131, so has goat’s milk.

What if I have thyroid disease? Would Iodine-131 affect me any differently?

The effects of Iodine-131 on health depend on many factors.  At this time, levels of Iodine-131 are still many times below the FDA intervention level.  If you have specific questions or concerns, contact your physician.

You’ll also find a variety of Japan-related briefings on nuclear radiation on the CDC website, including:

Those with long memories will recall that it was concerns over the accumulation of radioactive strontium-90 in milk (and the environment) that led to the banning of above-ground nuclear testing in 1963.

Prior to that time, incredibly, hundreds of above-ground atomic tests were conducted all around the world, releasing significant quantities of radioactive isotopes including (americium-241, cesium-137, iodine-131, strontium-90).

Strontium-90, which acted much like calcium in the human body, was of particular concern as it ended up deposited in bones and teeth, raising serious concerns over future cancer risks.

It is worth noting that radioactive iodine 131– with a half-life of just 8 days – poses far less danger than strontium-90, whose half-life was nearly 3 decades.

While far removed from today’s situation, some of you may find the  EPA’s extensive web site on above-ground nuclear testing during the `bad old days’, and the types of radioactive isotopes released, worth exploring (see Above-Ground Nuclear Blasts).

For those interested in monitoring local radiation levels in your region, you can visit the EPA’s RadNet website. 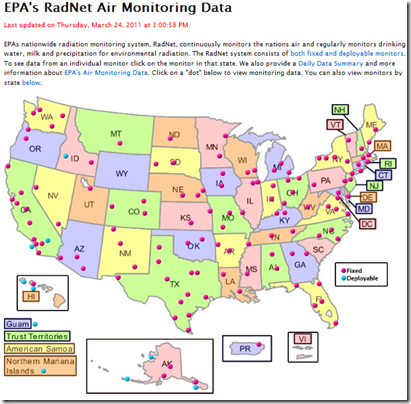 By visiting the RadNet Site you can click on the map (pictured above) and get real-time readout of current and recently detected radiation readings from scores of locations around the nation.

The EPA is also posting Daily Summaries on the radiation impact on the United States, along with regular statements.

Posted by Michael Coston at 8:29 AM