The standard advice provided by Ready.gov, FEMA, and organizations like the Red Cross, is that every family, individual, and business needs to be prepared to deal with a disaster for at least 3 days (meaning having a first aid kit, emergency supplies, and a plan) before help arrives.

If most people won’t prepare for 3 days, the thinking is there’s little value in asking them to prepare for a week, or even two.

Yet time after time we see instances when entire communities are devastated - and services and supplies are disrupted - for periods that far exceed this 3 day scenario.

I was in New Orleans six weeks after Hurricane Katrina struck to try to retrieve what few belongings we could from my brother’s French Quarter apartment, and the place still looked like a war zone.

Water and electrical service was absent in many parts of the city, rotting garbage was piled up on every curbside, a curfew was in effect, and everywhere you looked grocery stores, pharmacies, and doctor’s offices were boarded up.

While most of the city was still evacuated, many of those that remained (including emergency workers) were living in third world conditions.

Power was out to more than 3 million customers (approximately 6 million people), and it took up to 2 weeks to get these folks back online.

Friends of mine living in Miami were literally cooking over an open fire in their front yard for two weeks. 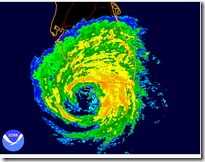 Hurricane Ike in 2008 brought similar misery to the Texas Gulf Coast, all but wiping the town of Gilchrist from the map, and leaving tens of thousands of residents without electricity for weeks.

In Japan, 100 days after the combined earthquake and Tsunami, millions of people’s lives are still uprooted, thousands remain in temporary shelters, and the misery factor runs very high.

On a smaller scale, the same could be said about the residents of Christchurch, New Zealand who have now experienced three major seismic events in less than a year.

While we can’t prevent disasters like earthquakes, hurricanes, floods, and tornadoes . . . we can be better prepared to deal with them.

Last March I stumbled upon a colorful, easy-to-follow, 100 page `survival guide’ released by Los Angeles County, that covers everything from earthquake and tsunami preparedness, to getting ready for a pandemic.

The guide may be downloaded here (6.5 Mbyte PDF).

While designed specifically for the nearly 10 million residents of Los Angeles County, this guide would be a valuable asset for anyone interested in preparing for a variety of hazards. 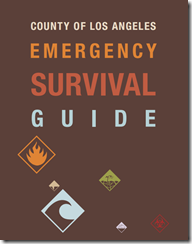 And in Los Angeles, the advice is to have emergency supplies (food, water, etc) to last up to 10 days.

While in all likelihood help will begin to arrive within 48 to 72 hours of a major disaster, if you have extra supplies on hand you are in a better position to offer help to a friend, a neighbor, a relative, or your community.

And in the wake of a major disaster, you may find there are better things to be doing with your time than queuing up for hours waiting for water and food distributions.

Beyond being practical, prepping is ethical.

And it isn’t just me saying that.

In October, 2008 I wrote a blog which highlighted the John's Hopkins Study entitled Ethics and Severe Pandemic Influenza: Maintaining Essential Functions through a Fair and Considered Response.

It included the following snippet from the summary provided on  the Johns Hopkins Berman Institute of Bioethics website.

. . .  individuals and families who can afford it should do their best to prepare for any disaster. The paper notes, the more initiative the general public exercises in stockpiling several weeks' worth of food, water, paper goods, batteries medicines, and other needed supplies, the less vulnerable they will be to a break in the supply chain.

It is important for leaders to communicate to the middle class and the wealthy that it is their responsibility to prepare for self-sufficiency in order to free up scarce supplies and allow first responders to direct their attention towards those too poor or vulnerable to prepare themselves.

While this may not have been the main thrust of this paper's message, it is a powerful component.  One that bloggers such as myself have been trying to promote for several years.

As long as our supply chains are intact, grocery store shelves are full and capable of being restocked, and no major shortages exist it is not hoarding, selfish, or unethical to be stockpiling a reasonable amount of emergency supplies for you, your family, and others you might be able to assist during a disaster.

So the standard advice to prepare for 3 days is a good start, but if you are capable of doing more, you really should.

During a crisis relief agencies will have their hands full trying to help those who were unable to prepare, or who lost their preps due to a disaster.

By being prepared in advance, you take some of the burden off these agencies, which will allow them to concentrate their efforts on helping those less able to help themselves.

And by being prepared, you are in a better position to help others.

And that’s a win-win situation.

For you, your family, and your community.

Posted by Michael Coston at 8:59 AM