Even as Europe continues to deal with their declining EHEC outbreak - caused by what appears to be a new, more virulent, and antibiotic resistant form of E. Coli -we are getting word of another bacterial foe (this time in Hong Kong) that appears to have learned a few new tricks as well.

While once greatly feared and the cause of numerous epidemics up until the early 20th century, Scarlet Fever -  caused by a bacteria called group A Streptococcus – can be successfully treated by modern antibiotics and today is usually a mild illness.

[Credit: National Library of Medicine]  circa 1918

The illness is caused by the same bacteria that causes `strep throat’, and is characterized by fever, a very sore throat, a whitish coating or sometimes `strawberry’ tongue, and a `scarlet rash’ that first appears on the neck and chest.

It primarily affects children under the age of 10.  Adults generally develop immunity as they grow older. Untreated, this bacterial infection can lead to:

For more on the disease, here is the CDC’s Scarlet Fever: A Group A Streptococcal Infection information page.

Today we are getting word of an unusually large outbreak of scarlet fever in Hong Kong (and presumably parts of mainland China as well) that is being described as having `mutated’ to become more contagious and resistant to some antibiotics.

He said 419 cases have been recorded so far this year, well above the historic baseline. He said the high activity is a regional phenomenon, with many cases recorded on the Mainland and in Macau.

The bacterial infection is caused by Group A streptococcus. Dr Tsang said the serotype M12 of the bacteria is dominant in this year’s cases.

“Over 90% of cases this year affected children aged under 10, with the majority in the age group of four to seven years.”

A new gene segment has been found in one of the isolates that gives the bacteria an increased ability to spread among humans.

“It may explain why there are higher number of cases this year,” Dr Tsang said, adding the centre will analyse test results and notify doctors, and Mainland and Macau authorities, of the findings.

He urged people to watch their personal hygiene. Parents of children with fever and sore throat should seek medical advice immediately.

A second report, this time from RTHK News states that the University of Hong Kong has tested this bacteria, and found it to be resistant to some of the antibiotics used to treat strep throat.

Tests by the University of Hong Kong have found that the bacteria which causes scarlet fever has mutated and become more contagious.

Health officials say this explains why there's been a recent surge in the number of cases of the potentially fatal disease, which mainly affects children. Experts warn that infections will remain at a high level for several months.

They also say the disease has become resistant to certain antibiotics.

Although the chart below is only current through the 11th of June, it clearly shows the spike in Scarlet Fever cases reported in Hong Kong in 2011. 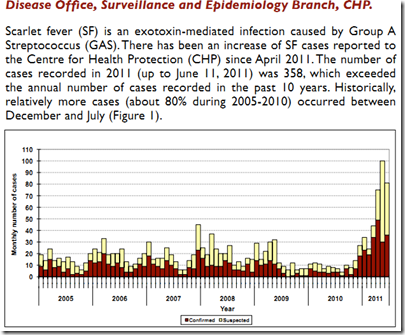 Media outlets are reporting that two children have died from this illness (a 7-year old girl and a 15-year old boy) over the past 3 weeks – the first such deaths in Hong Kong in 10 years.

Hong Kong, with excellent surveillance, top notch medical facilities, and plentiful access to a wide range of antibiotics is particularly well equipped to deal with the emergence of this disease.

Less certain is how well this outbreak can be managed on the Chinese Mainland.

Whether this `mutated’ strep A has `legs’, and this outbreak persists or even spreads, is something we’ll have to wait to see.

But regardless of how this particular outbreak plays out, anytime we see an old bacterial foe picking up new tricks – particularly involving transmissibility, virulence, resistance – it is worth our paying attention.

Bacterial evolution proceeds at an astonishing rate driven by the misuse of antimicrobials, horizontal gene transfers, recombination, and simple mutation.

Despite our arsenal of antibiotics, the list of resistant bacteria continues to expand, with names like  MRSA, NDM-1, KPC, EHEC, and now even Scarlet Fever making headlines around the world.

So while the end of the antibiotic era is not yet at hand, the fear is, we may be drawing closer to that day.

Short of seeing a hugely virulent pandemic – growing antimicrobial resistance is probably the greatest threat to public health on the horizon.

A few of my recent blogs on the subject include: