To go along with my blog earlier today (see Dr. Robert Webster’s bird flu concerns), we’ve a report from Bangladesh on an agreement to share samples of the H9N2 bird flu virus with the U.S. CDC for development of a seed vaccine.

As has been mentioned here before, H9N2 – while generally producing mild symptoms in humans and poultry – is considered to have pandemic potential.

The concern is that it could reassort (swap genes) with other influenza viruses (including H5N1), producing a more virulent and easily transmissible strain.

First today’s report from bdnews24.com  (h/t Treyfish on FluTrackers), and then I’ll return with more.


Dhaka, Sep 18 (bdnews24.com) – Bangladesh will share a new strain of bird flu virus, identified as a possible pandemic threat, with US Centres for Disease Control and Prevention (US CDC) to develop 'seed virus,' key ingredient to make a vaccine in emergency.


"We will share the vaccine for scientific use," health secretary Muhammad Humayun Kabir told bdnews24.com on Sunday as he confirmed about the sharing of the H9N2 strain of bird flu—A/Bangladesh/0994/2011 (H9N2).

This article mentions human infections from H9N2 were detected in Bangladesh last March, although no details are provided.  FluTrackers did pick up an FAO/EMPRES report on a human case during that time period which you can read here.

Since H9N2 circulates in regions of the world where influenza testing is rarely done, we don’t really know how often this virus infects humans. Over the past dozen years a small handful of cases have been identified – mostly in Hong Kong (see CIDRAP Avian Influenza (Bird Flu): Implications for Human Disease).

Adding to the concern, just last week a study was published that looked at level of antibodies to H5N1 and H9N2 flu viruses among rural villagers in Thailand.

Interestingly, direct exposure to poultry was not found to be associated with positive serologic findings for any of these avian strains.

This study – while limited – suggests that mild (or possibly subclinical) infections by these avian viruses may be occurring in parts of Asia.

Despite causing rare human infection, these avian viruses need to acquire genetic changes before they could spark a pandemic. Which is why we concern ourselves with their ability to reassort with other flu strains. 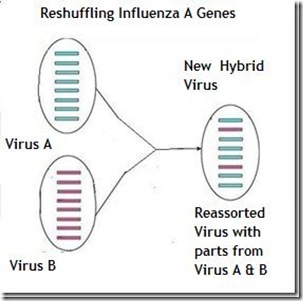 Which means that any two compatible influenza viruses could conceivably – and under the right conditions – generate 256 different combinations by swapping one or more of their 8 (potentially) interchangeable gene segments.

In mouse testing, they found half of the hybrid viruses were biologically `fit’ as far as replication goes, and 8 hybrids were significantly more pathogenic than either of their parental viruses.

Research such as this shows the potential for the H9N2 virus to move towards a more `humanized’ pathogen. And with H1N1 and H9N2 both known to be circulating in pigs in Asia, there are ample opportunities for them to co-infect the same host.

A few notable H9N2 stories from the past include:

Unlike the H7 and H5 avian flu strains, poultry (and swine) infections by the H9N2 virus are not required to be reported to the OIE.  So we have far less data on how widespread H9N2 might be.

As we saw in 2009, sometimes a pandemic virus will emerge from an unexpected source, and with a surprising lineage. While the world was waiting for an H5 bird flu to emerge from Asia, we were blindsided by a H1N1 swine flu from North America.

All of which highlights the importance of establishing better global surveillance of humans, and farm animals, for the next emerging influenza virus.

Regardless of its strain.