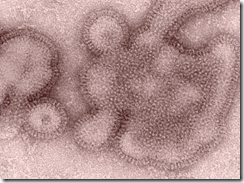 When a new flu strain appears there is often some confusion of what to call it, particularly when the HA and NA components are the same as other circulating flu viruses.

This is the problem we ran into when a novel H1N1 virus (now officially dubbed  A(H1N1)pdm09) emerged.  The media latched on to `Swine flu’, while scientific publications used a variety of nom de flus, including A/H1N1/09 and pdmH1N1.

It took more than two years before a consensus was reached (see WHO: Call It A(H1N1)pdm09).  And while that does not exactly roll off the tongue, it does have the the advantage of being precise.


Today we’ve a joint announcement from the World Health Organization, FAO, and OIE on a standardized nomenclature for the recently emergent trH3N2 virus that has been detected in a handful of people across several states since last summer.

We’ll have to wait to see if this designation is adopted elsewhere. What will be done if another variant of the A(H3N2) virus should appear is not mentioned.

A hat tip to Giuseppe Michieli on FluTrackers for posting the following link.

Joint announcement of FAO, OIE and WHO

FAO, OIE and WHO continue working closely together to address influenza issues related to public health and animal health.

Since July 2011, twelve human cases of infection with a variant influenza A(H3N2) virus have been detected in the United States. To date, no report has been received from elsewhere in the world. This virus has different virological characteristics from current circulating seasonal influenza viruses in humans, and has a new gene constellation: 7 genes from the triple reassortant A(H3N2) viruses known to have been circulating in pigs in the North America and the M gene from an A(H1N1)pdm09 virus, a seasonal virus currently circulating in humans.

In order to improve communications and avoid confusion, FAO, OIE and WHO have established a working group of experts to standardize the terminology for variant influenza viruses. The joint recommendation for the above mentioned A(H3N2) virus is: A(H3N2)v , where “v” stands for “variant”.

An example of use of the terminology: