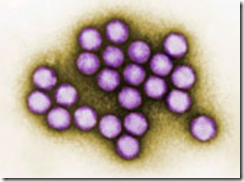 Yesterday the Internet was abuzz with rumors of `SARS’, or at least something that looked like SARS, sending scores of people to hospitals in Hebei, China (see China Denies Internet Rumor Of SARS Outbreak).

While SARS seemed unlikely (we haven’t seen an outbreak in 9 years), news reports out of Hebei over the past week have suggested some kind of respiratory outbreak was in progress.

Today, Taiwan’s CDC is reporting that China has notified them that the outbreak is due to the Adenovirus type 55, not to SARS.

A hat tip to Shiloh on FluTrackers for picking up this story and adding it to their thread.

Taipei, Feb. 24 (CNA) An outbreak of disease that is causing a stir in the Chinese online community is not SARS but adenovirus infection, the Centers for Disease Control (CDC) confirmed Friday after checking with the Chinese health authorities.

China, however, did not reveal the scale of the epidemic to Taiwan.

Adenoviruses are one of the most common causes of respiratory illness in the world, and to date, more than 50 different types have been isolated.

The CDC’s Adenovirus Information page describes the virus this way:

Adenoviruses most commonly cause respiratory illness. The symptoms can range from the common cold to pneumonia, croup, and bronchitis. Depending on the type, adenoviruses can cause other illnesses such as gastroenteritis, conjunctivitis, cystitis, and less commonly, neurological disease.

Some people infected with adenoviruses can have ongoing infections in their tonsils, adenoids, and intestines that do not cause symptoms. They can shed the virus for months or years.

We have seen rare outbreaks of emerging strains of adenovirus that have caused more serious illness, including one serotype (Ad14) that has been associated with a number of deaths during the past decade (see 2007 MMWR Acute Respiratory Disease Associated with Adenovirus Serotype 14 --- Four States, 2006—2007).

Like all viruses, adenoviruses are capable of evolving and mutating, and new strains are likely to crop up from time to time, with varying degrees of severity.

While not influenza (or worse, SARS), we’ll keep an eye on this outbreak, and see how it progresses.