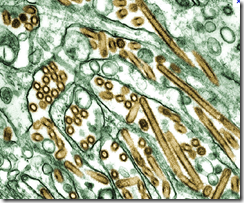 As I mentioned yesterday in Science: Peter Palese On The CFR of H5N1, not everyone agrees with his analysis of H5N1 seroprevalence studies, which he believes supports the idea that `millions’ of people have already been infected by the virus, and that the true fatality rate (CFR) is far lower than advertised.

Today, a counter argument (an added bonus, this is an open access paper) appears in mBio, authored by CIDRAP director Michael T. Osterholm and Nick Kelley.

(Fair disclosure: I’m acquainted with both Mike and Nick, and was invited to be presenter at a CIDRAP pandemic conference back in 2009).

The paper is called:

Two recently submitted (but as yet unpublished) studies describe success in creating mutant isolates of H5N1 influenza A virus that can be transmitted via the respiratory route between ferrets; concern has been raised regarding human-to-human transmissibility of these or similar laboratory-generated influenza viruses.

Furthermore, the potential release of methods used in these studies has engendered a great deal of controversy around publishing potential dual-use data and also has served as a catalyst for debates around the true case-fatality rate of H5N1 influenza and the capability of influenza vaccines and antivirals to impact any future unintentional or intentional release of H5N1 virus.

In this report, we review available seroepidemiology data for H5N1 infection and discuss how case-finding strategies may influence the overall case-fatality rate reported by the WHO.

We also provide information supporting the position that if an H5N1 influenza pandemic occurred, available medical countermeasures would have limited impact on the associated morbidity and mortality.

I would encourage you to read the entire article, where the authors dissect some of the methods used in existing seroprevalence studies.

It is quite a detailed analysis, and worthy of your full consideration.

After excluding some of the seroprevalence studies that utilized an extremely low antibody titer threshold (in some studies, set as low as ≥1:10), the author’s conclude that:

The go on to say that:

In fact, if H5N1 virus does become a pandemic virus, the virulence (as measured by the case-fatality rate) could decrease 10- to 20-fold from what is currently documented and the virus would still generate a more severe pandemic than the 1918 pandemic, where the overall case-fatality rate was probably about 2%.

Given the global population and the current dynamics of population movement around the world, an H5N1 pandemic, even with a relatively low case-fatality rate, would be a truly catastrophic event.

I’ve reproduced their summary below.

In summary, we believe that the debate about the case-fatality rate of H5N1 influenza in humans and the suggested important role of currently available antivirals and vaccines in mitigating an H5N1 pandemic are without merit.

Furthermore, we do not believe that continued focus on these issues helps to address how best to manage research involving influenza viruses, such as H5N1, that are transmissible between mammals and have the potential to be highly virulent in humans.

Future discussions specific to the current controversy need to resolve critical questions such as how we safely conduct H5N1 virus transmission studies in mammals, how we share critical methods and results with those who have a need to know, and how we ensure that laboratory-generated H5N1 viruses do not escape controlled environments.

Resolution of these issues with regard to H5N1 influenza viruses has the potential to serve as a template for similar situations involved existing or emergent pathogens. It is our belief that the current controversy provides a valuable opportunity for scientists and public policy experts to work together in creating this road map for the future.

Dr. Osterholm is a member of the National Science Advisory Board for Biosecurity. His views expressed here do not represent the official policy or scientific conclusions of the NSABB.

NOTE: Since this was an open access paper I was able to incorporate more of it into today’s blog than I could with yesterday’s Palese paper.

I suspect this debate will rage, unresolved, until we get more and better data.

Hopefully, we’ll get that data from well mounted and standardized seroprevalence studies, and not from the butcher’s bill from the next pandemic.

Posted by Michael Coston at 9:58 AM