Although they are only rarely detected, there is evidence to suggest that humans may be infected by avian influenza viruses more often than is commonly suspected.

Every year billions of people around the world experience flu-like symptoms that can stem from any of hundreds of different viruses.

Of those, only the tiniest fraction are tested to see what pathogen caused the illness.


While most people are aware of the roughly six hundred H5N1 `bird flu’ infections detected over the past decade, we’ve also seen a smaller number of human infections caused by a variety of avian and swine origin flu viruses.

In 2003, an outbreak of H7N7 at a poultry farm in the Netherlands went on to infect at least 89 people (mostly mildly, but 1 death), and many more may have been infected subclinically.

In 2006 1 person in the UK was confirmed to have contracted H7N3, and the following year, 4 people tested positive for H7N2 – both following local outbreaks in poultry.

But in terms of concern, the closest runner up to H5N1 virus right now is probably H9N2 – which is known to have infected a handful of humans, mostly in Asia.

During the last half of 2011 we also saw the emergence of a small number of H3N2v swine influenza infections (see H3N2v: Three’s A Crowd) in the United States.


Over the years, we’ve seen a small number of sero-prevalence studies that have looked for (and found) evidence of prior infection by avian influenzas in people exposed to poultry or wild birds, including this one from 2006.

We report serologic evidence of avian influenza infection in 1 duck hunter and 2 wildlife professionals with extensive histories of wild waterfowl and game bird exposure. Two laboratory methods showed evidence of past infection with influenza A/H11N9, a less common virus strain in wild ducks, in these 3 persons.

Interestingly, antibodies to the relatively rare H11N9 virus were detected in these 3 individuals, while antibodies for the far more common H4 and H6 avian viruses (known to circulate in American ducks) were not.

One theory that has been suggested is that humans are less likely to develop long-lasting antibodies when exposed to avian-type influenza viruses.

Which brings us to a new study that appears in the May edition of the CDC’s EID Journal that detected the H10N7 avian influenza virus in two poultry abattoir workers in Australia.

In March 2010, an outbreak of low pathogenicity avian influenza A (H10N7) occurred on a chicken farm in Australia. After processing clinically normal birds from the farm, 7 abattoir workers reported conjunctivitis and minor upper respiratory tract symptoms. Influenza virus A subtype H10 infection was detected in 2 workers.

Although 7 abattoir workers reported symptoms, only 2 tested positive for the H10 virus. The authors write:

The conjunctivitis and other reported symptoms among the 7 workers were mild and of short duration, and there was no evidence of seroconversion by hemagglutination inhibition or virus neutralization tests in any of the workers from whom convalescent-phase blood was collected, including the 2 with confirmed influenza A subtype H10 infection.

These findings are consistent with the mild symptoms and lack of serologic evidence reported in humans after experimental infection with influenza A (H10N7), which may indicate the limited ability of the virus to multiply and stimulate a detectable immune response in humans (10).

Other studies have reported no evidence of elevated subtype H10–specific antibody titers among poultry abattoir workers, although serologic evidence of subtype H10 infection was detected among turkey farmers in the absence of clinical symptoms (11).

Although this outbreak was limited, and the symptoms were mild, the abattoir has instituted new policies requiring PPEs (personal protective equipment) for employees who have direct exposure to birds and carcasses.

But this study does show that it can infect humans, and that mild or subclinical infections from avian viruses are probably happening that are not being picked up by routine surveillance.

When it comes to the next influenza threat, we worry most about H5N1 and H9N2. But the next pandemic virus to successfully jump species could just as easily come out of left field, as we saw in 2009 with the H1N1 swine flu. 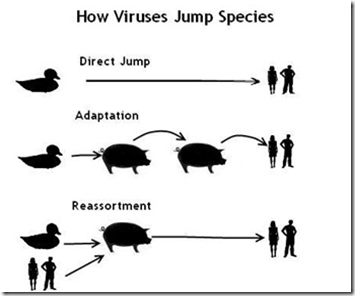 All of which highlights the importance of establishing better global surveillance of humans, and farm animals, for the next emerging influenza virus.

Regardless of its strain.

Posted by Michael Coston at 5:58 AM