Of Mice And Menus

Today, a study that appears in the journal Cell Metabolism that calls into question dieting advice of long standing.

The study, whose pedigree includes the Salk Institute in La Jolla, is called:

While diet-induced obesity has been exclusively attributed to increased caloric intake from fat, animals fed a high-fat diet (HFD) ad libitum (ad lib) eat frequently throughout day and night, disrupting the normal feeding cycle. To test whether obesity and metabolic diseases result from HFD or disruption of metabolic cycles, we subjected mice to either ad lib or time-restricted feeding (tRF) of a HFD for 8 hr per day. 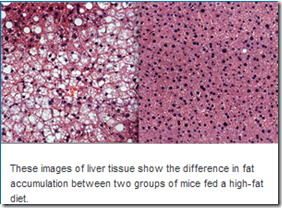 The entire article is behind a pay wall, but we’ve a detailed press release outlining what this study found.

Briefly, researchers fed two groups of lab mice the same number of calories each day of high fat food, but in one group only allowed the mice to eat during an 8 hour period.

The other group of mice could nibble round the clock.

And the results were astonishing.

While both sets of mice consumed the same number of calories, the ones forced to fast 16 hours each day stayed lean, while the ones who were allowed to `graze’  throughout the day gained a good deal of weight and developed metabolic problems (high cholesterol, high blood sugar, & fatty liver disease).

More details via excepts from the press release from the Salk Institute.  Follow the link to read it in its entirety.

LA JOLLA, CA—It turns out that when we eat may be as important as what we eat. Scientists at the Salk Institute for Biological Studies have found that regular eating times and extending the daily fasting period may override the adverse health effects of a high-fat diet and prevent obesity, diabetes and liver disease in mice.

Panda's team fed two sets of mice, which shared the same genes, gender and age, a diet comprising 60 percent of its calories from fat (like eating potato chips and ice-cream for all your meals). One group of mice could eat whenever they wanted, consuming half their food at night (mice are primarily nocturnal) and nibbling throughout the rest of the day. The other group was restricted to eating for only eight hours every night; in essence, fasting for about 16 hours a day. Two control groups ate a standard diet comprising about 13 percent of calories from fat under similar conditions.

After 100 days, the mice who ate fatty food frequently throughout the day gained weight and developed high cholesterol, high blood glucose, liver damage and diminished motor control, while the mice in the time-restricted feeding group weighed 28 percent less and showed no adverse health effects despite consuming the same amount of calories from the same fatty food. Further, the time-restricted mice outperformed the ad lib eaters and those on a normal diet when given an exercise test.

"This was a surprising result," says Megumi Hatori, a postdoctoral researcher in Panda's laboratory and a first author of the study. "For the last 50 years, we have been told to reduce our calories from fat and to eat smaller meals and snacks throughout the day. We found, however, that fasting time is important. By eating in a time-restricted fashion, you can still resist the damaging effects of a high-fat diet, and we did not find any adverse effects of time-restricted eating when eating healthy food."

Of course, experimental results in mice don’t always translate well to humans. So it will take further research to know whether this strategy will prove equally effective in humans.

The authors do state that there is reason to hope, as the lead author is quoted as saying:

That most successful human lifestyle interventions were first tested in mice, so he and his team are hopeful their findings will follow suit. If following a time-restricted eating schedule can prevent weight gain by 10 to 20 percent, it will be a simple and effective lifestyle intervention to contain the obesity epidemic.