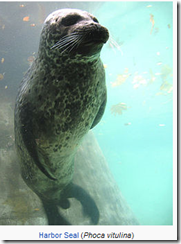 
Even though the actual study has not appeared online (now online) in the journal mBio, overnight we’ve seen more than a half dozen stories on soon-to-be published research into a novel influenza virus that infected and killed more than 160 seals along the New England coast last year.

You’ll find an excellent report from Carl Zimmer in the New York Times (see Flu That Leapt From Birds to Seals Is Studied for Human Threat), as well as this reportage from the BBC (see New flu virus found in seals concerns scientists)

In early October of 2011 media reports indicated that scores of dead seals had been discovered along the shoreline of New England, predominantly from the North Shore of Massachusetts to the southern coast of Maine.

In November NOAA declared these deaths an “Unusual Mortality Event”, cautioned the public to avoid contact with seals, and directed more resources to study the event.

Although the cause of these deaths was still undetermined, some researchers saw similarities to a seal die off that had occurred 30 years earlier.

In that instance, the culprit turned out to be an H7N7 influenza. (see Isolation of an influenza A virus from seals G. Lang, A. Gagnon and J. R. Geraci)

In December it was announced that the pathogen behind this latest seal die off was a variant of the H3N8 avian flu strain, versions of which are known to also infect horses and dogs.

A virus similar to one found in birds but never before in harbor seals was the cause of five of 162 recent deaths of the animals  in New England, according to a group of federal agencies and private partners.

This Influenza A virus subtype, H3N8, appears to have a low risk of transmission to humans. Experts continue to analyze this virus, and any findings of public health significance will be immediately released. The virus is not the infamous H5N1  virus that caused a global pandemic in 2007, or the H1N1 virus from 2009.

While we tend to think of humans, pigs, and birds as the main hosts of influenza (and to a lesser extent dogs and horses), a number of other species are susceptible to some kinds of influenza strains as well.

Fast forward eight months and today research is being published to show that the H3N8 virus collected from dead seals last fall has mutated from its avian origins to become better adapted to mammalian hosts.

First stop, excerpts from a press release from the American Society for Microbiology, publishers of mBio.

A new strain of influenza virus found in harbor seals could represent a threat to wildlife and human health, according to the authors of a study appearing July 31 in mBio®, the online open-access journal of the American Society for Microbiology. It is crucial to monitor viruses like this one, which originated in birds and adapted to infect mammals, the authors say, so that scientists can better predict the emergence of new strains of influenza and prevent pandemics in the future.

"There is a concern that we have a new mammalian-transmissible virus to which humans haven't been exposed yet. It's a combination we haven't seen in disease before," says Anne Moscona of Weill Cornell Medical College in New York City, the editor of the report.

The mBio® study analyzed the DNA of a virus associated with a die-off of 162 New England harbor seals in 2011. Autopsies of five of the seals revealed they apparently died from infection with a type of influenza called H3N8, which is closely related to a flu strain that has been circulating in North American birds since 2002. Unlike the strain in birds, this virus has adaptations to living in mammals and has mutations that are known to make flu viruses more transmissible and cause more severe disease. The virus also has the ability to target a receptor called SAα-2,6, a protein found in the human respiratory tract.

Based on full genome sequencing and phylogenetic analysis, seal H3N8 descended from an avian strain that has been circulating in North American waterfowl since 2002, which implies recent transmission from wild birds to seals.

Accordingly, seal H3N8 has acquired the ability to bind sialic acid receptors that are commonly found in the mammalian respiratory tract. Mutations in the HA and PB2 genes – required for cell entry and replication, respectively – suggest enhanced virulence and transmission in mammals, but these putative attributes require further investigation. Given these findings along with the long history of the spread of avian influenza to humans—most notably H1N1 and H5N1—seal H3N8 could pose a threat to public health.

Regular readers of this blog are aware that avian influenza strains bind preferentially to the kind of receptor cells commonly found in the digestive and respiratory tracts of birds; alpha 2,3 receptor cells.

Human (and mammalian adapted) influenzas – on the other hand - bind to the kind of receptor cells that line the surfaces of the human upper respiratory system; alpha 2,6 receptor cells.

In both the BBC and NYTs report, one of the authors of this study – celebrated virus hunter Professor Ian Lipkin of Columbia University – expressed concerns over the discovery that seals – like pigs – have both types of receptor cells.

If infected by two different strains simultaneously, they could act as a `mixing vessel’ for influenza strains, and produce a hybrid (reassorted) virus. 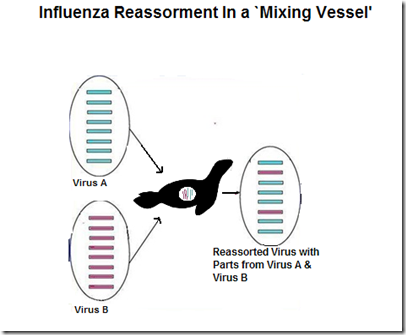 Every day, it seems, we learn more about how remarkably well these influenza viruses evolve and adapt. Despite decades of work by thousands of researchers, there is still so very much we are just beginning to understand.

Although the public health threat from H3N8 is hard to quantify, this is yet another example of how Nature’s laboratory is open and operating 24/7, and why we need to remain alert and prepared for the next pandemic threat that may emerge.

When the mBio study is published, I’ll post the link here.

Posted by Michael Coston at 8:12 AM