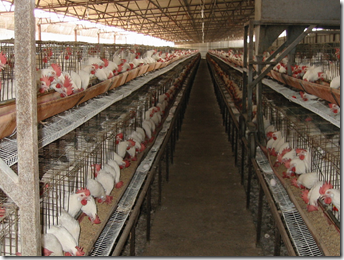 Roughly 10 weeks ago (June 27th) we learned of an outbreak of Highly Pathogenic H7N3 avian influenza among poultry in Jalisco, Mexico; the first such outbreak in that country since an outbreak of H5N2 in the early 1990s.

Since that time, more than 22 million birds have either died from the disease, or have been culled, and Mexico’s poultry industry has taken a terrible beating.

The good news - according to a report yesterday in MeatPoultry.com - is no new infections have been reported in the past 3 weeks, and restocking of birds is set to begin (see Mexico tallies birds culled, restocking to begin).

While there are a number of avian flu viruses circulating in the wild, the OIE only requires that H5s and H7s be reported due to their known ability to mutate from a low pathogenic virus to highly pathogenic virus.

Among the avian influenzas, H5N1 virus gets the bulk of the headlines, and rightfully so. While a matter of some controversy (see Revisiting The H5N1 CFR Debate), among known human cases, the mortality rate has been a staggering 60%.

Other strains that have demonstrated at least some ability to infect humans include H7, H9, H10, and H11. Fortunately, most of the time these rare infections have produced only mild flu symptoms (sometimes only conjunctivitis).

For now, these viruses are primarily a threat to the poultry industry, and to a lesser extent, people working in direct contact with infected fowl.

Although global surveillance and reporting on novel avian viruses in humans is spotty at best, some known H7 cases include: 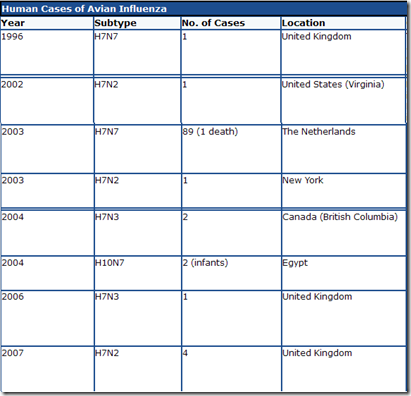 To this short list of human cases we can now add two more (admittedly, very mild) cases, as is detailed in today’s MMWR.

During June–August 2012, Mexico's National Service for Health, Safety, and Food Quality reported outbreaks of highly pathogenic avian influenza (HPAI) A (H7N3) virus in poultry on farms throughout the state of Jalisco (1,2). This report describes two cases of conjunctivitis without fever or respiratory symptoms caused by HPAI A (H7N3) virus infection in humans associated with exposure to infected poultry.

Patient 1. On July 7, a poultry worker aged 32 years complaining of pruritus in her left eye was examined at a clinic in Jalisco. Physical findings included redness, swelling, and tearing. Conjunctivitis was diagnosed; the patient was treated symptomatically and recovered fully. Because the patient had collected eggs in a farm where HPAI A (H7N3) virus was detected, the Institute for Epidemiological Diagnosis and Reference, Mexico, tested ocular swabs from both of her eyes for influenza A (H7) by real-time reverse transcription–polymerase chain reaction (rRT-PCR), and embryonated chicken eggs were inoculated for viral isolation. The swab material was positive for influenza A (H7) virus by rRT-PCR and virus was isolated from each eye. These findings were reported to the World Health Organization on July 19, and full genome sequences (CY125725–32) were uploaded to GenBank. The virus was closely related by nucleotide sequence to previously reported HPAI A (H7N3) viruses collected during poultry outbreaks in Jalisco with sequences available in GenBank (JX397993, JX317626).

Patient 2. A man aged 52 years, who was a relative of patient 1 and worked on the same farm, developed symptoms consistent with conjunctivitis on July 10 and sought care at a local clinic on July 13. He was treated symptomatically and recovered without sequelae. When public health authorities became aware of this patient, they obtained eye swabs, which were tested by rRT-PCR, revealing influenza A (H7).

Avian influenza A viruses are designated as HPAI or low pathogenicity avian influenza (LPAI) based on molecular characteristics of the virus and the ability of the virus to cause disease and mortality in birds (3). To date, only influenza A (H5) and (H7) subtypes have been described as HPAI. Influenza A (H7) subtype viruses have been detected in wild birds in many parts of the world and can cause outbreaks in poultry. Influenza A (H7) infection in humans is uncommon, but can occur after direct contact with infected birds, especially during outbreaks of influenza A (H7) virus among poultry (4). Illness can include conjunctivitis without fever, upper respiratory tract symptoms, or both (4,5), and severity can range from mild to fatal (4). In the United States, avian influenza outbreaks in poultry are rare, but they are detected and reported sporadically. In the United States, only two cases of illness with LPAI A (H7) virus infection are known to have occurred in humans, both of whom recovered (6,7).

The conjunctivitis cases in Jalisco most likely represent HPAI A (H7N3) virus transmission from infected poultry to humans through direct contact. United States agricultural, public health, and clinical personnel should be aware of these poultry outbreaks with transmission to humans in a neighboring country. Persons working with poultry known or suspected to be infected with influenza A viruses should use appropriate personal protective equipment, including face masks, gloves and eye protection (e.g., goggles). Clinicians and epidemiologists should consider avian influenza A virus infection in patients who have conjunctivitis or ILI and have contact with poultry in areas with known avian influenza outbreaks. Clinicians who suspect avian influenza A virus infections in humans should obtain a conjunctival or respiratory specimen, or both, depending on signs and symptoms, and submit samples to a national, regional, or state public health laboratory to enable specific influenza testing. Clinicians also should consider early empiric antiviral treatment of suspected cases with a neuraminidase inhibitor (8,9). Public health officials should survey family members and contacts of infected persons to find cases of human-to-human transmission.

Since the H7 viruses usually only produce mild symptoms in humans, you may be wondering why all the concern over a couple of H7 infections?

The answer is simple.  H7s, like all influenza viruses, are constantly mutating and evolving.

What is mild, or relatively benign today, may not always remain so.

And in 2008 we saw a study in  PNAS that suggested the H7 virus might just be inching its way towards better adaptation to humans.

So we watch, with considerable interest, anytime a novel flu virus manages to jump to humans.  Even if only in a very limited fashion.

For more details on that study, and some more posts on the H7 constellation of flu viruses, you may wish to revisit:

Posted by Michael Coston at 1:09 PM