The Risks Of Chikungunya Outbreaks In The United States 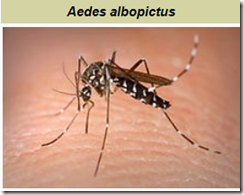 Chikungunya, up until about a decade ago, was a little known mosquito-borne disease first described in Tanganyika in the early 1950s. For the next five decades it was sporadically seen across eastern and central Africa.

That is, until 2005, when Chikungunya made a surprise jump to the Indian Ocean island of Réunion. There, it infected nearly 1/3rd of the island’s 770,000 residents (see 2006 EID article Chikungunya Disease Outbreak, Reunion Island) in just a matter of months.

Chikungunya typically produces a fever, severe muscle and joint pain, and headaches. The symptoms usually go away after a few weeks, but some patients can sustain permanent disability, and some deaths have been reported.

In the eight years since that  jump, `Chik’ has spread further across the Indian Ocean, Southeast Asia, and even briefly into northern Italy.

While the virus isn't normally found in Europe, the vector, the Aedes mosquito, is.  All it took was one infected traveler to arrive infected with the virus to start the chain of transmission. 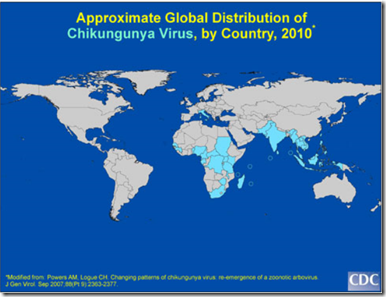 I told the story several years ago in It's A Smaller World After All, but the short version is that a traveler, returning from India, brought the virus to Italy in 2007 which led to more than 290 cases reported in the province of Ravenna, which is in northeast Italy.

The concern is that the same sort of introduction could happen elsewhere in Europe, or here in the United States, just as we saw with West Nile Virus in 1999 (see DVBID: Final West Nile Report For 2012) and with Dengue Fever in 2010 (see MMWR: Dengue Fever In Key West)

The two primary mosquito vectors of Chikungunya are the Aedes aegypti and Aedes albopictus (cite WHO FAQ) both of which can be found across many regions of the Americas.

The risk is considered great enough that early last year, the CDC and PAHO (Pan American Health Organization) put together a 161-page guide on preparing for the arrival of Chikungunya to the Americas (see Preparedness and Response for Chikungunya Virus Introduction in the Americas).

All of which serves as prelude to a report that appeared last month in PloS Neglected Tropical Diseases called:

Modeling Dynamic Introduction of Chikungunya Virus in the United States

Chikungunya is a mosquito-borne viral infection of humans that previously was confined to regions in central Africa. However, during this century, the virus has shown surprising potential for geographic expansion as it invaded other countries including more temperate regions.

With no vaccine and no specific treatment, the main control strategy for Chikungunya remains preventive control of mosquito populations. In consideration for the risk of Chikungunya introduction to the US, we developed a model for disease introduction based on virus introduction by one individual. Our study combines a climate-based mosquito population dynamics stochastic model with an epidemiological model to identify temporal windows that have epidemic risk. We ran this model with temperature data from different locations to study the geographic sensitivity of epidemic potential.

We found that in locations with marked seasonal variation in temperature there also was a season of epidemic risk matching the period of the year in which mosquito populations survive and grow. In these locations controlling mosquito population sizes might be an efficient strategy.

But, in other locations where the temperature supports mosquito development all year the epidemic risk is high and (practically) constant. In these locations, mosquito population control alone might not be an efficient disease control strategy and other approaches should be implemented to complement it.

Our results strongly suggest that, in the event of an introduction and establishment of Chikungunya in the US, endemic and epidemic regions would emerge initially, primarily defined by environmental factors controlling annual mosquito population cycles. These regions should be identified to plan different intervention measures.

In addition, reducing vector: human ratios can lower the probability and magnitude of outbreaks for regions with strong seasonal temperature patterns. This is the first model to consider Chikungunya risk in the US and can be applied to other vector borne diseases.


More background on this modeling study is available from the Cornell University Press Office.

ITHACA, N.Y. – Global travel and climate warming could be creating the right conditions for outbreaks of a new virus in this country, according to a new Cornell University computer model.

The model predicts that outbreaks of chikungunya, a painful virus transported by travelers and spread by the invasive Asian tiger mosquito, could occur in 2013 in New York City during August and September, in Atlanta from June through September, and year-round in Miami. The probability of a disease outbreak is correlated with temperature, as warmer weather allows the Asian tiger mosquito to breed faster and grow in numbers, according to the study published in the November issue of PLOS Neglected Tropical Diseases.

According to the simulation, there is a high probability of a chikungunya outbreak if a single infected person arrives in New York in July or August and is bitten by an Asian tiger mosquito. The risks are the same, but with wider time frames, for transmission in Atlanta and Miami, according to the paper.

Asian tiger mosquitoes were introduced to the United States in Texas in the 1980s; they are established up the East Coast into New Jersey and are rising in numbers in New York City. The aggressive mosquito outcompetes local varieties and transmits more than 20 pathogens, including chikungunya and dengue, said Laura Harrington, associate professor of entomology and the study’s senior author.

“The virus is moving in people, and resident mosquito populations are picking it up,” Harrington said.

The model estimates that with typical regional temperatures, a chikungunya outbreak in New York would infect about one in 5,000 people, said Diego Ruiz-Moreno, a postdoctoral associate and the paper’s lead author

“However, this number would increase drastically as temperatures rise due to climate change,” Ruiz-Moreno said.

While this study focused on Chikungunya, much the same could be said about the potential for seeing Dengue, Malaria, or even Yellow Fever making inroads in the United States and Europe.

In March of 2010 the journal  Eurosurveillance carried a series of articles on vector borne diseases and their potential to impact those living in Europe. One of the articles, Yellow fever and dengue: a threat to Europe? by P. Reiter, had these sobering comments about the future of vector-borne illnesses in Europe.

The history of dengue and yellow fever in Europe is evidence that conditions are already suitable for transmission. The establishment of Ae. albopictus has made this possible, and the possibility will increase as the species expands northwards, or if Ae. aegypti is re-established.

The epidemic of chikungunya in northern Italy in 2007 [8,49] confirms that Ae. albopictus is capable of supporting epidemic transmission, although laboratory studies indicate that the strain of virus involved was particularly adapted to this species [50,51].

Nevertheless, it is not unreasonable to assume that climatic conditions that permit malaria transmission will also support transmission of yellow fever and dengue, in which case transmission could extend into northern Europe [52].

Reason enough that if you live in - or are visiting  - a mosquito prone area, to remember to follow the `5 D’s’  (courtesy Florida Department of Health). 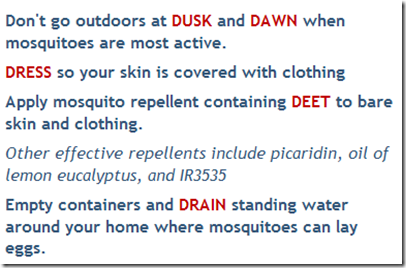 Posted by Michael Coston at 2:52 PM