HPA: Unusual Number Of PVL Pneumonia Cases In the UK 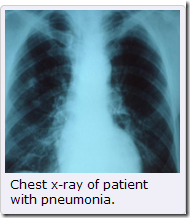 In an article called Warning over killer pneumonia linked to flu, Rebecca Smith, Medical Editor for The Telegraph writes today that a rare type of bacterial pneumonia – one that usually only accounts for 30 to 40 cases each year in the UK - has been identified in 18 cases of community acquired pneumonia between December 6th and January 7th.

The culprit is a strain of Staphylococcus aureus that carries a gene for PVL (Panton-Valentine leukocidin) – which is a potent cytotoxin that can destroy human neutrophils (white blood cells), spark severe infections, and cause necrotizing pneumonia.

PVL producing genes have been detected in at least 14 different strains of S. aureus (cite BMJ), but are found in less than 2% of all S. aureus bacteria. It is most commonly associated with aggressive skin and soft tissue infections (SSTIs), but it is also the cause of a small number of severe (usually community-acquired) pneumonia cases each year.

S. aureus is a very common bacteria that is carried asymptomatically by as much as 30% of the population  – including some strains with the PVL gene – as part of the normal bacterial flora of their skin and mucus membranes (see Coffee, Tea, or MRSA?).

Panton-Valentine Leukocidin (PVL) is a toxic substance produced by some strains of Staphylococcus aureus which is associated with an increased ability to cause disease.

Although several other countries have encountered widespread problems with PVL-related disease, infections caused by PVL remain uncommon in the UK and, to date, most have been caused by bacteria which are sensitive to a range of antibiotics.

PVL has been seen in the UK since the 1950s and 60s but cases continue to be seen here only in small numbers. There is currently no UK-based evidence to suggest that children are more vulnerable than other groups to PVL-related infections or that these infections are acquired or spread through playgrounds.

The risk to the UK general public of becoming infected with PVL Staphylococcus aureus is small but the Agency is actively working alongside healthcare colleagues to raise awareness of this infection, as well as ensuring appropriate research continues to monitor trends in infection.

PVL genes can be found in  both methicillin-sensitive S. aureus (MSSA) and methicillin-resistant S. aureus (MRSA) strains.  According to today’s article in The Telegraph.

The 18 cases have all needed intensive care and several required sophisticated life-support known as ECMO, where oxygen is pumped into the blood outside the body because the lungs are overwhelmed with infection.

The patients ranged in age from four to 63 years with a median age of 41 and most have flu-like symptoms before developing pneumonia. In five cases the bug had spread between family members.

The Telegraph article refers to an HPA bulletin on these cases, but I’ve been unable to locate it as of this writing.  I’ll update this post with a link when it becomes available.

From the Annals of Intensive Care in 2011, we get some interesting research on PVL pneumonia, that looked at 32 case reports, with an overall mortality rate of 41%.

They describe the infection:

Community-acquired necrotizing pneumonia due to S. aureus-secreting PLV toxin is a highly lethal infection, affecting a young and healthy population group [5]. The hallmarks are an influenza-like prodrome, leukopenia, rapid progression to septic shock, and respiratory distress, with multilobar necrosis and haemoptysis [5,6,14].

In examining the records of 32 patients, they concluded:

Early suspicion should be triggered by the presence of influenza-like prodrome, leucopenia, rapid progression to septic shock, respiratory distress with multilobar necrosis, and hemoptysis.

For PVL-secreting MSSA-necrotizing pneumonia, influenza-like prodrome may be associated with fatal outcome, whereas previous SSTI may reduce mortality. Further studies based on a larger patient number are necessary to confirm this finding.

Today’s story from the UK mention 5 cases of family transmission, which is somewhat reminiscent of a story we followed last spring at the end of what was an otherwise lackluster 2011-12 flu season.

Our attention was briefly directed towards three members of a family (out of five who fell ill) that died from a respiratory infection in Calvert County, Maryland (see Calvert County: Update On Fatal Cluster Of Respiratory Illness).

While these deaths made national headlines and spurred considerable speculation as to the viral cause, in the end we learned that it was seasonal H3N2 influenza, exacerbated by a MRSA (or necrotizing) pneumonia co-infection.

According to The Telegraph article, the HPA is not worried this will to turn into an epidemic, but since early diagnosis is crucial, they are urging that, “Healthcare personnel should remain vigilant for such cases, especially during the influenza/ respiratory virus season.”

The HPA provides the following HCP guidance for the treatment of PVL pneumonia on their website.

Posted by Michael Coston at 8:46 PM