Netherlands: Second Outbreak Of Bird Flu In A Week 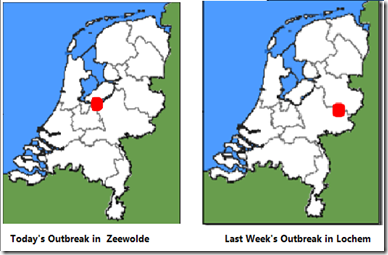 Last week, in Netherlands: Bird Flu (Probably H7) Reported In Lochem, we learned of an outbreak of avian influenza that resulted in the culling of 85,000 birds.

Today, the Netherland’s Ministry of Economic Affairs reports a new outbreak (also likely H7), this time on an organic farm in Zeewolde, more than 100 km to the west of the first outbreak.

A hat tip to @martinenserink of Science Magazine for tweeting the announcement. The following is a machine translation:

In Zeewolde is one organic farm with 24,000 hens bird flu (avian influenza, AI) was adopted. This company has 2 stables with outdoor access. It is probably the mild H7 variant.

Because a low pathogenic (mild) H7 variant can mutate into a highly pathogenic (highly contagious and lethal to chickens) variant, the company is both a low and a high pathogenic variant cleared. This is based on European rules. The depopulation is by the Dutch Food and Consumer Product Safety Authority (nVWA).

From Tuesday, March 19, 2013 at 13.00 is in an area of ​​over one kilometer around the holding in Zeewolde one for the transport of poultry, eggs, poultry manure and used. Within this area are no other poultry.

Letter from Secretary Dijksma (EZ) to the House about an outbreak of bird flu (Avian influenza, AI) on a ...

Map of the 1 kilometer zone Zeewolde

#14,935 Although many experts - including our own CDC - have been vocal for weeks over the possibility that the COVID-19 ... 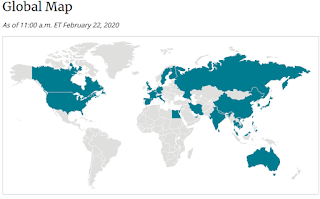