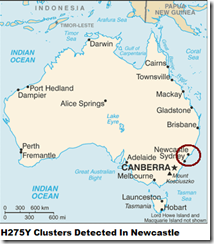 Readers with good memories will recall that in December of 2011, in NEJM: Oseltamivir Resistant H1N1 in Australia, we looked at a cluster of oseltamivir (Tamiflu ®) resistant H1N1 viruses in and around the Newcastle area of New South Wales.

The lead author of that NEJM correspondence was Aeron C. Hurt, Ph.D. from the World Health Organization (WHO) Collaborating Centre for Reference and Research on Influenza, North Melbourne, VIC, Australia.

What Hurt and his colleagues found was evidence for the sustained community transmission of a resistant strain of the H1N1pdm09 virus.

After analyzing viral samples pulled from 182 patients seen in emergency departments, intensive care units, and doctor’s offices in New South Wales between May and August of 2011, they found 29 (16%) carried the H275Y resistance mutation.

Most of the patients lived within 50km of Newcastle, and while 10 of the cases could be epidemiologically linked (2 in 4 households, 2 in a shared car trip), the rest could not.

Only one had been treated with oseltamivir prior to testing.

While globally the percentage of Tamiflu resistant H1N1 viruses remains low (about 2%), it does appear to be increasing.

Today, Dr. Hurt will present his research at ASID (Annual Scientific Meeting of the Australasian Society for Infectious Diseases) in Canberra, where he will warn of the dangers of growing resistance (see MedPage Today article Tamiflu Resistance May Be Rising).


Should the incidence of resistant H1N1 increase, it would not be without precedent.

Not too many years ago Amantadine (an M2 ion channel blocker) was the preferred influenza antiviral.  It was cheap, plentiful, and effective. But by the mid 2000s Amantadine began to lose its ability to combat the H3N2 seasonal flu virus along with some strains of the H5N1 bird flu.

It has been suggested that the prophylactic use of Amantadine by Chinese poultry farmers (who supposedly included it in their chicken feed for several years) may have contributed to this sudden resistance.

But whatever the cause, by January of 2006 the CDC had issued a warning to doctors not to rely on Amantadine (or Rimantadine) to treat influenza.

The arrival of the novel 2009 H1N1 pandemic virus was a game changer, in that it – unlike seasonal H1N1 – was still sensitive to oseltamivir. Since then, we’ve been watching to see if – like its predecessor – learns to evade oseltamivir as well.

So far, the news is good; resistance in the (formerly pandemic) 2009 H1N1 strain remains rare.

But pharmacological victories over constantly evolving viruses (and bacteria) tend to be fleeting, and so the need for new classes of antivirals and antibiotics is great.

Posted by Michael Coston at 9:51 AM