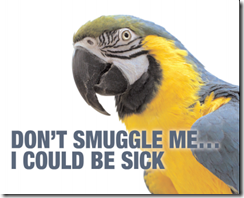 Although relatively rare, an outbreak of Psittacosis (parrot fever) is in the news once again, this time in Sweden where a 75-year old man has died, and 8 others have been infected.

Chlamydophila psittaci bacteria – which is shed in the feces of infected Psittaciformes (cockatoos, parrots, parakeets, lories, etc.) and poultry (ducks & turkeys primarily, less often in chickens) - can cause serious pneumonia in humans.

The route of infection is almost always via direct contact with birds or bird feces, but a few instances of human-to-human transmission have been either documented, or strongly suspected.

First the report from Sweden – where we learn about an outbreak that occurred last March (no word why we are just now hearing about it) and appears to have involved H-2-H transmission.  I’ll have more on this rare form of bacterial pneumonia when you      return.

A Swedish man who died of parrot fever in southern Sweden has transmitted the rare disease to at least eight people, with experts pointing out that human-to-human transmission is exceptionally uncommon.

After a 75-year-old man died in Kronoberg in March from parrot fever, the illness has spread among those who were near to him during his illness, including care personnel.

"This person was very sick and it was an extreme case. It's still hugely uncommon though, no one was infected third hand from the secondary cases we had," Arne Runehagen, doctor at the Swedish Institute for Infectious Disease Control (Smittskyddsinstitutet), told the TT news agency.

Sweden reports 5 to 10 cases of Psittacosis each year, but outbreaks of this size are very rare. In 2007, in neighboring Norway, we did see a very large outbreak where `dozens’ were reportedly sickened after attending a bird show (see To You, My Heart Cries Out Chlamydia).

Today’s report refers to a previously documented case of human-to-human transmission of Psittacosis in Scotland, which is likely this one from the May of 2012 in the journal Eurosurveillance on an outbreak in Tayside, Scotland, where H-2-H transmission appears to have occurred.

The epidemiological pattern suggested person-to-person spread as illness onset dates were consistent with the incubation period and no single common exposure could explain the infections. In particular the only common exposure for a healthcare worker case is overlap in place and time with the symptomatic index case.

Last November in Psittacosis Identified In Hong Kong Respiratory Outbreak, we saw a limited outbreak among personnel at an agricultural station where smuggled birds seized by customs agents had been quarantined. Subsequently 3 parrots died, and 10 were euthanized.

While outbreaks are uncommon, the CDC reports roughly 50 cases are diagnosed each year in the United States. As it can be difficult to diagnose, the true incidence of this disease probably much higher.

Treatment is via antibiotics, primarily with tetracycline.

One of the concerns with this disease is the widespread and essentially unregulated use of antibiotics by bird owners in treating their flocks.  Overuse of antibiotics can lead to the development of resistant bacteria.

In 2007, an EID Journal report Chlamydophila psittaci Transmission from Pet Birds to Humans looked at the use of antibiotics at 39 breeding bird breeding facilities in Belgium, and found that more that 40% had used antibiotics to treat sick birds in the previous 12 months. More than 10% routinely gave antibiotics to birds prophylactically.

Although a small study, their findings suggested that bird owners may be infected – and display only mild symptoms - more often than previously suspected.

That said, among a small survey of bird owners - roughly 25% had reported having had pneumonia after acquiring a Psittaciforme as a pet - a number far greater than would normally be seen in the general population.

Prior to the development of antibiotics in the middle of last century, the mortality rate from psittacosis pneumonia was on the order of 15% to 20%. Today, if properly diagnosed and treated, deaths are rare.

One of the most fascinating stories regarding Parrot Fever came just 10 years after the end of the Spanish Flu Pandemic, when a multi-state outbreak of Parrot Fever briefly stoked pandemic fears once again.

The CDC maintains a Psittacosis website, with the following information.

Incidence
Since 1996, fewer than 50 confirmed cases were reported in the United States each year. Many more cases may occur that are not correctly diagnosed or reported.

Transmission
Infection is acquired by inhaling dried secretions from infected birds. The incubation period is 5 to 19 days. Although all birds are susceptible, pet birds (parrots, parakeets, macaws, and cockatiels) and poultry (turkeys and ducks) are most frequently involved in transmission to humans.

Surveillance
Psittacosis is a reportable condition in most states.