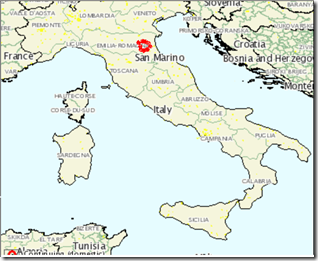 A follow up to a story we looked at on September 2nd (see Italy: MOH Reports Human H7N7 Infection) the ECDC  today published an epidemiological update, which includes 3 human infections by this avian virus.  All three experienced mild symptoms (primarily conjunctivitis), although one did report muscle aches and chills.

Serological testing is planned for exposed workers, contacts, and their families (all of whom remained asymptomatic)  which may give us a better idea of how well this particular avian influenza spreads in humans.

As we’ve discussed before (see A Brief History Of H7 Avian Flu Infections) H7 viruses have, over the past decade, been increasingly viewed as having a potential to infect humans . The emergence of a highly pathogenic (in humans) H7N9 in China last spring has increased these concerns, as has the revelation that a new H7N7 strain emerged in Chinese poultry at roughly the same time (see Nature: Genesis Of The H7N9 Virus).

Here then is the ECDC’s H7N7 update and assessment.

​Summary of the situation

On 14 August 2013 highly pathogenic avian influenza (HPAI) was detected in poultry in Ostellato, Ferrara province, Emilia-Romagna, Italy. Subtype H7N7 was confirmed. Protection and surveillance zones have been established in accordance with European Council Directive 2005/94. Monitoring of avian influenza, and epidemiological and virological investigations, are being carried out by regional authorities. Despite the establishment of protection and surveillance zones, several subsequent outbreaks have been reported in this region: on 21 August 2013 in Mordano, Bologna, in a farm with commercial layer hens; on 23 August 2013 in a farm with commercial layer hens in Mordano, Bologna; and on 27 August in Portomaggiore, Ferrara, in a commercial turkey farm. On 4 and 5 September 2013 there were two other H7N7 confirmed outbreaks; one in a farm in Mordano, Bologna and another in a backyard flock in Bondeno, Ferrara.

All affected holdings have been cleaned and disinfected. Up to one million poultry will be culled in order to contain this outbreak. The protection zones remain in place for 21 days after the last action in an affected farm.

Human infections due to avian influenza - zoonotic transmission
Since H7N7 has been known to spread from poultry to humans with mild (conjunctivitis) to devastating (death) results, active surveillance has been established on all people living in the affected farms as well as exposed workers (and their cohabitants) with direct contact to sick animals (before the avian flu diagnosis). This active surveillance is continued for up to 10 days after the last exposure. Up to 70 regular poultry workers and family contacts, as well as up to 300 workers involved in culling operations, have been under surveillance. Monitored people have been contacted on a daily basis and interviewed about symptoms and general health.

As of 10 September 2013, three humans have identified with conjunctivitis due to H7N7. The infected men were between the ages of 46 and 51 years and had either been working on an affected farm or had participated in the culling. After the conjunctival swabs were found to be positive, the workers were isolated at home. The cases of conjunctivitis healed after 5-6 days without complications. One case had chills and muscle aches in addition to conjunctivitis.
A serological study screening exposed workers, cases and the family members of human cases is being planned to determine the number of seroconversions in those exposed. These results will provide valuable information about the frequency of avian-to-human transmission of H7N7 and the potential risk factors for being infected with H7N7 in people who have close contact to infected poultry in outbreak situations.

Other reports from zoonotic transmission
A limited number of human cases associated with HPAI outbreaks in poultry have been reported since 1959 (the date of first recognition). In the past, there have been reports of single cases of people infected from their domestic poultry which mixed with wild birds.[1, 2] Since 2000 there have been increasing and larger outbreaks of HPAI in poultry reported in the EU. The reason for this is unclear. Very large outbreaks have occurred in densely populated commercial bird populations such as in Italy in 1999 (type A/H7N1), the Netherlands, Belgium and Germany in 2003 (type A/H7N7) and Canada in 2004 (H7N3). An outbreak of highly pathogenic A/H7N7 avian influenza in birds, which began in the Netherlands in February 2003, caused the death of one veterinarian (from an acute respiratory illness). It also caused some mild illness (mostly eye infections) in 88 poultry workers and members of their families [3-5] .


Serologic studies performed in Northern Italy between December 2008 and June 2010 compared 188 Italian poultry workers exposed to high and low pathogenic H5 and H7 avian influenza virus and 379 non-exposed controls. A total of 6 of 188 (3.2%) poultry workers were H7-seropositive and none of the controls was positive [6].

Assessment
ECDC concludes that the risk of the current H7N7 avian influenza found in Italy being transmitted to the general population is low. Persons at risk are mainly people in direct contact/handling diseased chickens or their carcasses e.g. farmers, veterinarians and those labourers involved in the culling. Those groups are being actively monitored by the local health authorities. Human-to-human infections need to be monitored very closely to prevent further spread. The ECDC recommendation of pre- or post-expositional prophylaxis using antiviral treatment for people at risk need to be considered as this has been shown to decrease the risk of transmission of H7N7. (http://wwwnc.cdc.gov/eid/article/16/10/09-1412_article.htm).

Outbreaks of HPAI can severely affect farms where it is found. Control of HPAI requires excellent surveillance (for both birds and humans) and stringent control measures. European sanitation protocols need to be followed and active surveillance systems have to be installed where HPAI affected farms are reported.

Posted by Michael Coston at 1:00 PM