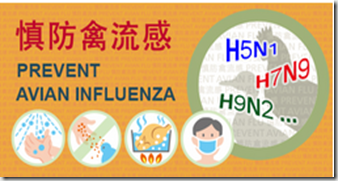 Although not considered as serious as H7N9 or H5N1, the announcement yesterday (see Hong Kong: Isolation & Treatment Of An H9N2 Patient) recently arrived from neighboring Shenzhen has unleashed another epidemiological investigation, and forced the medical surveillance of this patient’s recent contacts.

As part of their response, late yesterday the Hong Kong CHP issued a letter to local doctors and hospitals and this morning published a follow up press release, both of which are excerpted below.

Our first stop, the CHP notification letter to local doctors.

We are writing to inform you that we have confirmed an imported human case of influenza A (H9N2) infection  involving an 86-year-old man with underlying illnesses.  He lived in Shenzhen with his daughter and presented with low grade fever, chills, cough and sputum since 28 December, 2013. He travelled back to Hong Kong and was admitted to North District Hospital on the same day. Sputum collected on 28 December was tested positive for influenza A M gene and negative for H1/H3 and was subsequently confirmed positive for influenza A(H9N2) by Public Health  Laboratory Services Branch  (PHLSB) today. His condition is stable with fever subsided since 29 December and currently being isolated in hospital.


Investigations by the Centre for Health Protection (CHP) revealed that the patient had no recent poultry contact,  consumption of undercooked poultry, or contact with patients. His home contact is asymptomatic.


Influenza A (H9) is a statutory notifiable disease in Hong Kong. Any suspected case meeting the reporting criteria (https://ceno.chp.gov.hk/casedef/casedef.pdf) should be immediately reported to the Central Notification Office of CHP via fax (2477 2770), phone (2477 2772) or CENO On-line (www.chp.gov.hk/ceno). Please also contact the Medical Control Officer (MCO) of DH at Pager: 7116 3300 call 9179 when reporting any suspected case.


For updates on the latest situation of avian influenza, please visit CHP website at  http://www.chp.gov.hk/en/view_content/24244.html. Thank you for your ongoing support in combating communicable diseases.

And as we’ve come to expect, Hong Kong’s CHP continues to provide daily updates whenever a they detect an event with potential public health ramifications.   The good news, aside from the patients mild symptoms and no signs of spread, is that preliminary genetic analysis of the virus reveals `no evidence of genetic reassortment with genes of human influenza origin or resistance to the antiviral Tamiflu.’

The Centre for Health Protection (CHP) of the Department of Health (DH) today (December 31) provided an update on the confirmed human case of avian influenza A(H9N2) affecting a man aged 86.

"The epidemiological investigations, enhanced disease surveillance, port health measures and health education against avian influenza are all ongoing," a spokesman for the DH said.

The patient's home contact in Shenzhen has remained asymptomatic.

The 51 health-care workers (HCWs) of North District Hospital (NDH) and the ambulance service remain under medical surveillance. Among them, an HCW of NDH presented with productive cough and sore throat and the respiratory specimen tested negative for the influenza A virus upon testing by the CHP's Public Health Laboratory Services Branch (PHLSB).

The officer who handled the patient upon his entry at Lo Wu Border Control Point is also asymptomatic. He has been put under medical surveillance. So far, there are no newly located contacts.

As the patient was staying in Shenzhen for the whole incubation period, the case is classified as an imported one. The CHP has passed investigation findings to the health authority of Guangdong for follow-up.

"Upon analysis by the PHLSB, the genes of the virus were determined to be of avian origin. They do not show significant differences from avian influenza viruses detected in Hong Kong and the Mainland in recent years. There is no evidence of genetic reassortment with genes of human influenza origin or resistance to the antiviral Tamiflu. We will continue to liaise and share the gene sequence with other health authorities based on established arrangements," the spokesman remarked.

The public is advised to avoid contact with poultry and wild birds, including chickens, ducks and sparrows.

"Travellers, especially those returning from avian influenza-affected areas and provinces with fever or respiratory symptoms, should immediately wear masks, seek medical attention and reveal their travel history to doctors. Health-care professionals should pay special attention to patients who might have had contact with poultry, birds or their droppings in affected areas and provinces," the spokesman advised.

Anytime public health authorities detect a novel influenza virus infection in a human, understandably alarm bells tend to go off. But we need to keep in mind that no one really knows how rare – or common – such infections really are.

The vast majority of people who develop `flu-like’ symptoms around the world never seek medical care, and even among the minority that do, most are never tested. Certainly not with lab tests that would pick up a novel influenza virus.

With enhanced surveillance in Hong Kong for both MERS-CoV and Avian H7N9 (and H5N1), however, the odds of detecting novel flu cases goes up considerably.  Whether we are seeing an actual uptick in the number of these types of infections, or are just getting better at detecting them, is something we don’t have enough data to discern.

But with enhanced surveillance ongoing in Hong Kong, and across Asia, for these three strains we are also gaining information about H6N1, H10N8, and nH9N2.

The serendipitous result of surveillance work is that you sometimes can learn a good deal about things you weren’t looking for at the time.  And that can often pay unexpected dividends further down the line.

Posted by Michael Coston at 8:34 AM