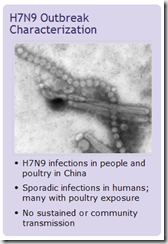 Our daily perusal of H7N9 cases takes us to four Chinese provinces (plus Beijing) on this 6th day of February, with (as of this writing) seven new cases to report.   As noted before, most of these cases appear to be sporadic, with no indications of sustained or efficient human-to-human transmission (see CIDRAP: NEJM H7N9 Epidemiology Study).

The first case (# 317 on FluTracker’s List) I already blogged on earlier today (see Beijing Reports 2nd H7N9 Case Of 2014), but we now have a less cumbersome account from Xinhua News.

The patient, a 73-year-old chicken farmer from Beijing's outer Huairou District, was in critical condition Thursday and was being treated at Ditan Hospital, the Beijing municipal health and family planning commission said in an updated press release at 9:30 p.m.

The man had raised, traded and slaughtered live poultry before he came down with flu symptoms and sought medication at a hospital near his home on Jan. 30, it said.

His fever persisted and his condition became serious on Wednesday, when test results indicated he was highly suspected of H7N9 infection, the document said.

The municipal disease prevention and control center confirmed the infection on the same day.

Investigators found the man had slaughtered 20 chickens between Jan. 24 and 28 with bare hands, and his hands were frostbitten with open wounds.

Altogether 35 people who were in close contact with the patient were put under medical observation, though no flu-like symptoms were detected as yet.

The capital city's first human H7N9 case was reported on Jan. 24. The patient, a man, had reportedly bought pigeons and eaten them before testing positive for H7N9 bird flu.

He died of respiratory failure, multi-infections and blood poisoning on Jan. 30.

Zhejiang clocks in with two new cases, both described as having `severe’ illness.

Patients with a Qinmou, male, 66 years old. Diagnostic Expert Group on February 6, Yancheng morning people infected with H7N9 avian influenza was confirmed cases. The patient went to farms to buy before the sick chickens 2, home cleaning after cooking slaughtered by the market. The patient is currently in a hospital for treatment in Yancheng, in critical condition.

Two patients, Huan, male, 63 years old. February 6 AM diagnosis of infected people Xuzhou expert group confirmed cases of H7N9 avian influenza. The patient's home from chickens 6, illness ago, went to a nearby farmers market shopping, there are live poultry stalls within the market. The patient is currently in a hospital for treatment of Xuzhou, in critical condition.

Up to now, the province in 2014 there were 11 cases of human infection with H7N9 avian influenza confirmed cases, 1 death.

Our next stop is Foshan City in Guangdong Province, about 85 miles to the Northwest of Hong Kong, where a 36 year old woman is reportedly in critical condition.

And lastly, Hunan province reports a single case as well.

The best way to keep track of all of these cases is via  FluTrackers (absolutely indispensible) H7N9 Case Line Listing, which I refer to constantly.