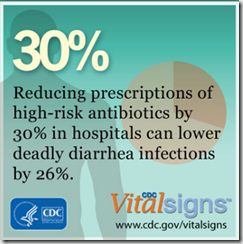 On Monday, in CDC Telebriefing (March 4th): Improving Antibiotic Prescribing Practices, I wrote about an upcoming CDC Vital Signs  report and web conference on the (often excessive) prescribing of antibiotics in US Hospitals.

This morning we’ve the audio and transcript from that teleconference, excerpts and links to the MMWR early release, plus detailed reports from author and blogger Maryn McKenna and Lisa Schnirring at CIDRAP News.

First stop, the Teleconference contents, including links to the audio and transcript.

Accompanying this teleconference we have the following MMWR Early Release illustrating the wide disparity in prescribing practices across the nation.

Background: Antibiotics are essential to effectively treat many hospitalized patients. However, when antibiotics are prescribed incorrectly, they offer little benefit to patients and potentially expose them to risks for complications, including Clostridium difficile infection (CDI) and antibiotic-resistant infections. Information is needed on the frequency of incorrect prescribing in hospitals and how improved prescribing will benefit patients.

Results: In 2010, 55.7% of patients discharged from 323 hospitals received antibiotics during their hospitalization. EIP reviewed patients' records from 183 hospitals to describe inpatient antibiotic use; antibiotic prescribing potentially could be improved in 37.2% of the most common prescription scenarios reviewed. There were threefold differences in usage rates among 26 medical/surgical wards reporting to NHSN. Models estimate that the total direct and indirect effects from a 30% reduction in use of broad-spectrum antibiotics will result in a 26% reduction in CDI.


Our next stop is Maryn Mckenna’s Superbug Blog, where Maryn looks at both the issues of appropriate antibiotic stewardship, and a proposed budget increase for the HHS to monitor help control the growing problem of antibiotic resistance.

Double-barreled news today from the US Centers for Disease Control and Prevention. In an analysis of several sets of hospital data, gathered by the agency and also purchased from independent databases, the CDC said it found that more than 37 percent of prescriptions written in hospitals involved some sort of error or poor practice, increasing the risk of serious infections or antibiotic resistance. And in a surprise announcement timed to the release of the federal draft budget, the agency said it is in line to receive $30 million to enhance its work combating antibiotic resistance in the US.

Our last stop is CIDRAP News where Lisa Schnirring provides an excellent summation of yesterday’s reports.

In a major report today that looked at antibiotic usage, the US Centers for Disease Control and Prevention (CDC) said some clinicians in similar hospital units prescribe triple the amounts, with some making the types of errors that fuel drug-resistance problems that put many more patients at risk.

On a more hopeful note, however, the same report also found hospitals that trim their antibiotic use by 30% can reduce Clostridium difficile (C diff) infections, a potentially deadly diarrheal infection known to sicken patients in health facilities, by 25%. The CDC published the findings today in Morbidity and Mortality Weekly Report (MMWR).