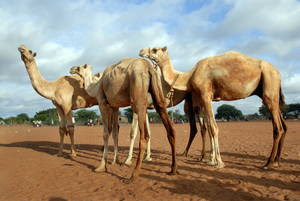 mBio usually posts new articles mid-morning East Coast time every Tuesday, so I’ll update this blog with a link when they do.

Until that time, we’ve got a press release from the American Society for Microbiology (excerpts below).

The discovery of fragments of MERS-COV virus in an air sample collected in a camel barn - while an important piece of the the MERS transmission puzzle - is neither totally unexpected nor proof of airborne transmission of the virus.  It only demonstrates a potential route of infection.


First the press release, then I’ll return with more.

Saudi Arabian researchers have detected genetic fragments of Middle East Respiratory Syndrome coronavirus (MERS-CoV) in the air of a barn holding a camel infected with the virus. The work, published this week in mBio®, the online open-access journal of the American Society for Microbiology, indicates that further studies are needed to see if the disease can be transmitted through the air.

For the study, researchers on three consecutive days last November collected three air samples from a camel barn owned by a 43-year-old male MERS patient who lived south of the town of Jeddah, who later died from the condition. Four of the man's nine camels had shown signs of nasal discharge the week before the patient became ill; he had applied a topical medicine in the nose of one of the ill camels seven days before experiencing symptoms.

Using a laboratory technique called reverse transcription polymerase chain reaction (RT-PCR) to detect gene expression, they found that the first air sample, collected on November 7, contained genetic fragments of MERS-CoV. This was the same day that one of the patient's camels tested positive for the disease. The other samples did not test positive for MERS-CoV, suggesting short or intermittent shedding of the virus into the air surrounding the camels, said lead study author Esam Azhar, PhD, head of the Special Infectious Agents Unit at King Fahd Medical Research Center and associate professor of medical virology at King Abdulaziz University in Jeddah.

Additional experiments confirmed the presence of MERS-CoV-specific genetic sequences in the first air sample and found that these fragments were exactly identical to fragments detected in the camel and its sick owner.

"The clear message here is that detection of airborne MERS-CoV molecules, which were 100% identical with the viral genomic sequence detected from a camel actively shedding the virus in the same barn on the same day, warrants further investigations and measures to prevent possible airborne transmission of this deadly virus," Azhar said.

"This study also underscores the importance of obtaining a detailed clinical history with particular emphasis on any animal exposure for any MERS-CoV case, especially because recent reports suggest higher risk of MERS-CoV infections among people working with camels," he added.

Meanwhile, he said, mounting evidence for camel-to-human transmission of MERS-CoV warrants taking precautionary measures: People who care for camels or who work for slaughterhouses should wear face masks, gloves and protective clothing, and wash their hands frequently. It is also important to avoid contact with animals that are sick or have tested positive for MERS-CoV. Those who visit camel barns, farms or markets should wash hands before and after contact with animals. In addition, pasteurization of camel milk and proper cooking of camel meat are strongly recommended.

Airborne (aerosolized or large droplet) transmission of MERS-CoV in humans is assumed to occur - hence the CDC’s stringent Interim Guidance for Health Professionals   on the use of PPEs – but other routes may be equally important players.

Last May, in MERS: A Focus On Fomites?  we looked at investigations focusing on the potential  role of inanimate objects and environmental surfaces in the transmission of the virus.

How the virus jumps to man – presumably from camels – and how camels acquire, and spread the virus, is less well mapped out. As Dr. Ian Mackay graphically illustrated last may, there are a lot of options.

Camels at the centre, aerosol all around...

An airborne-centric view of how the camel could be a source of sporadic human infection by MERS-CoV, a virus that is genetically very similar whether found in camels or humans. 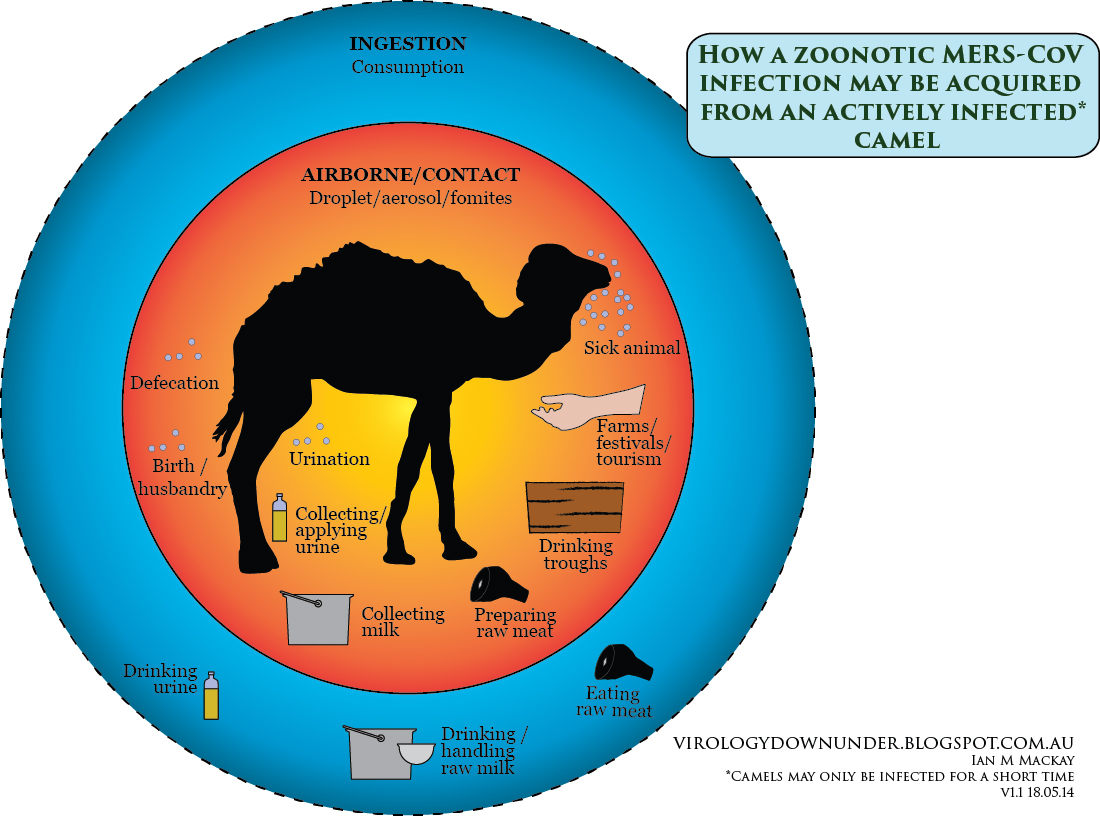 The inner ring (orange) is more about droplets and aerosols-if you must differentiate on size.


These are potential routes by which a human in contact with, or near to, camels might acquire virus from them, when those camels are actively infected.

The detection of fragments of MERS-CoV – using RT-PCR testing – in air samples in a camel barn doesn’t tell us if those fragments were viable, and capable of infecting anyone or anything.

But this study does show that the opportunity for the virus to spread from camels through the air exists, and thus invites additional research into this plausible route of transmission.