Yesterday’s EID Journal carries an important dispatch that looks at a topic we’ve discussed several times over the years; the downsides to relying solely on poultry vaccines for the control of Highly Pathogenic Avian Influenza (HPAI) (for earlier blogs see OIE: Countries That Vaccinate Poultry Need An `Exit Strategy' & Food Insecurity, Economics, And The Control Of H7N9).

For years countries have been deeply divided on this issue – with most of Europe, North America, and the rest of the developed world favoring the immediate culling of infected birds – while China, Vietnam, Indonesia, Egypt, and a handful of of other nations have come to rely almost completely on vaccines.

The problem has been that while vaccines can often protect poultry against illness - with increasingly diverse and rapidly evolving avian flu viruses - they cannot always prevent infection.  The end result being that subclinical infections can go undetected, viruses continue to circulate, and new variants or reassortants continue to emerge.

The chart below illustrates just some of the diversity among H5N1 strains that has emerged over the years. 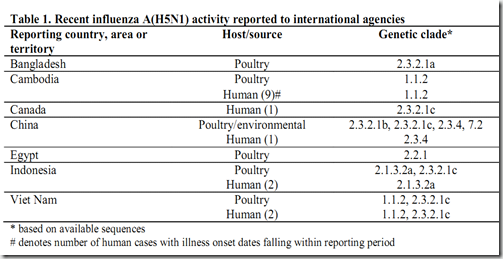 
While quarantine and aggressive culling is the recommended HPAI control strategy, for countries with high food insecurity and a heavy reliance upon poultry, vaccines have been an attractive option. Whether factory farmed or just backyard flocks, poultry represents a major source of income, protein, and accrued wealth for hundreds of millions of people.

Erode that in any significant way through culling, and you risk destabilizing an entire region. For China, which has been ground zero for avian flu viruses, vaccination was viewed as being their only recourse.

The OIE (World Organization For Animal Health) has been long aware of the potential of vaccines to hide infection, warning that vaccination of poultry cannot be considered a long-term solution to combating the avian flu virus. In 2013, the OIE reiterated this advice in Questions and Answers on influenza A(H7N9), stating:

Does OIE recommend vaccination of animals to control the disease?

When appropriate vaccines are available, vaccination aims to protect the susceptible bird populations from potential infection. Vaccination reduces viral excretions by animals and the virus’ capacity to spread. Vaccination strategies can effectively be used as an emergency effort in the face of an outbreak or as a routine measure in an endemic area. Any decision to use vaccination must include an exit strategy, i.e. conditions to be met to stop vaccination.

In 2009 we saw Professor C.A. Nidom, of the Institute of Tropical Disease, Airlangga University, Indonesia warn on relying on poultry vaccines to control Indonesia’s bird flu problem (see Indonesia: Debate Over Poultry Vaccination), and  Zhong Nanshan, a hero of the SARS outbreak and respiratory disease specialist in China, warned that vaccinated poultry can still become infected (and possibly transmit) the H5N1 virus.

GUANGZHOU, Feb. 6 (Xinhua) -- A leading Chinese expert on respiratory diseases has warned the public to be aware that poultry can be infected with the bird flu virus but show no symptoms.

"Special attention should be paid to such animals, including those that have been vaccinated," said Zhong Nanshan.

"The existing vaccines can only reduce the amount of virus, rather than totally inactivating it," he said.

While China’s poultry vaccination policies can be credited with reducing poultry losses, promoting better food security, and probably reducing human infections,  the costs of administering vaccines to billions of birds - often several times a year - is enormous, and at the same time the effectiveness of the vaccines continues to decline.

To shift abruptly away from vaccines and go to a strict `quarantine & cull’  strategy would almost certainly result in massive HPAI outbreaks, which could conceivably collapse their poultry industry. But if changes aren’t implemented – and probably soon -  at some point the vaccines available will no longer be able protect the industry.

All of which serves as prelude to a dispatch, published yesterday in the EID Journal, that looks for (and finds) subclinical HPAI infection in vaccinated Chinese poultry, and – as has been long feared - that mass vaccination is likely driving the creation of vaccine-escape variants.

Subclinical infection of vaccinated chickens with a highly pathogenic avian influenza A(H5N2) virus was identified through routine surveillance in China. Investigation suggested that the virus has evolved into multiple genotypes. To better control transmission of the virus, we recommend a strengthened program of education, biosecurity, rapid diagnostics, surveillance, and elimination of infected poultry.

Highly pathogenic avian influenza (HPAI) type A viruses of the subtype H5 have been circulating among poultry in several countries of Asia and Africa for many years. HPAI viruses of this subtype have also caused hundreds of infections among humans and presented a substantial threat to public health (1,2). China is one of the countries deeply affected by zoonotic viruses of this subtype (3). The government of China decided during 2005 to use a comprehensive strategy to control this zoonosis involving mass vaccination of poultry and strict culling of infected flocks (2).

Although this strategy has played a successful role in guaranteeing safety of food supplies, maintaining the poultry system, and minimizing human infections, governmental agencies in China are considering how to exit from mass vaccination programs, mainly because of the tremendous cost of this intervention. We report here an investigation of recent subclinical circulation of the HPAI virus among egg-laying chickens on a farm in China, to provide novel data and views on the evolution of the virus and improvement of HPAI control in China.

Currently, HPAI mass vaccination in poultry should not be stopped; otherwise, many HPAI outbreaks could likely occur in poultry farms with limited biosecurity. Conversely, HPAI mass vaccination in China can not be expected to have a progressive effect because the practice leads to silent spread of vaccine-escape variants selected in the host immunologic pressure induced against vaccine strains. We propose that the only way out of this dilemma is to strengthen the strategy published previously, which covers the following components: education, biosecurity, rapid diagnostics and surveillance, and elimination of infected poultry (14). Mass vaccination should be used as an additional tool within this 4-component strategy, not in place of the 4 components.

Although China is both the biggest producer of poultry, and the biggest consumer of poultry vaccines, the problems cited above are not unique to China.  Egypt, Vietnam, and Indonesia have all reported vaccine failures in the past (see FAO Warns On Bird Flu & Egypt: A Paltry Poultry Vaccine) and may face similar hard choices in the future.

For more on the steep rise in new H5 variants and subtypes in China, you may wish to revisit:

FAO-EMPRES Report On The Emergence And Threat Of H5N6

Posted by Michael Coston at 6:52 AM