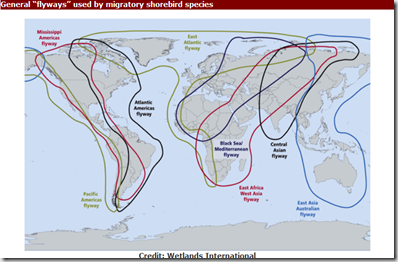 On Tuesday, in H5N8: A Case Of Deja Flu?, I recounted the history of great H5N1 bird flu expansion of 2005-2007, where that virus jumped from only 9 Southeast Asia countries to 60+ nations across Europe and Asia.  While it is far from clear whether H5N8 will follow H5N1’s flight path, we continue to see evidence of its encroachment to other regions of the world.

Since Tuesday, the Netherlands has reported several additional farms infected (see Netherlands: 2nd Farm At Kamperveen Showing Signs Of Bird Flu), and both Japan and Germany have found evidence of the virus in wild or migratory birds.

First stop, a report today from Reuters of a 2nd detection of H5N8 in Germany, this time in wild birds.

Nov 22 (Reuters) - German authorities on Saturday confirmed a second case of the H5N8 strain of bird flu in the eastern state of Mecklenburg-Vorpommern, with the virus found in a wild bird.

The strain is highly contagious among birds but has never been detected in humans.

"For the first time, the H5N8 virus has been confirmed in a wild bird in Mecklenburg-Vorpommern," Agriculture Minister Christian Schmidt said in a statement.

Japan, which saw a brief incursion of the H5N8 virus last April while South Korea was battling against multiple outbreaks (see Japan’s Avian Flu Outbreak Identified As H5N8 ), and which reported a little more than a week ago H5N8 In Migratory Bird Droppings, has now reported to the OIE another detection of H5N8 in Chiba prefecture. 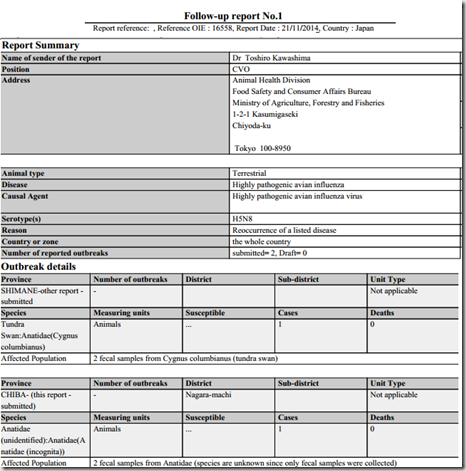 According to a Japan News article earlier today (Bird flu detected in Chiba Prefecture), with this second detection, Japan will now raise its nationwide bird flu alert from 2 to 3, and dispatch an emergency wild bird survey team.


While none of this is absolute confirmation that the H5N8 virus arrived in Western Europe on the wings of migratory birds, when you combine these recent detections in birds, and the statement from the OIE: European H5N8 Strain `Closely Related’ To Korean Strain, the preponderance of evidence swings in that direction.

For more on this you may wish to revisit these recent related blogs:

FAO On The Potential Threat Of HPAI Spread Via Migratory Birds