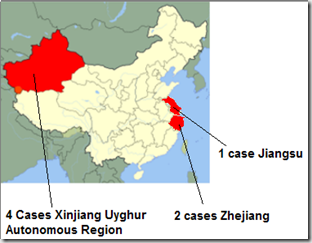 It’s been just over two weeks since our last H7N9 notification out of China (see Guangdong, China Reports 1 (Fatal) H7N9 Case), but today Hong Kong’s CHP is reporting on seven recent cases; 4 from Xinjiang, 2 from Zhejiang, and 1 from Jiangsu Province.   Of these, four have died.

We aren’t seeing the kind of detail being released with these announcements (e saw during the first two waves, but perhaps that will come when the WHO publishes their updates.

Of particular note, we’ve now seen 8 cases reported this fall from the far western Xinjiang Uyghur Autonomous Region, an area far removed from the rest of the H7N9 activity we’ve seen, and a region that did not report any activity during the first two waves.


First the Hong Kong CHP report, then I’ll return with a bit more.

While there have now been 454 human cases reported, no one really knows how many people have contracted the H7N9 virus.  Some cases (as in the Zhejiang case above) are mild, and are unlikely to be detected.   There are some estimates that put the real number of symptomatic cases in the tens of thousands (see Clinical severity of human infections with avian influenza A(H7N9) virus, China, 2013/14).

Whatever the real number, for now – based on the paucity of secondary cases among contacts of known cases - the virus does not show signs of transmitting efficiently from human to human.  Most infections appear to be the result of direct contact with infected birds.

The concern is that the H7N9 virus continues to evolve, reassort, and mutate as it spreads in China.  Over the summer, in Eurosurveillance: Genetic Tuning Of Avian H7N9 During Interspecies Transmission, we saw a study that identified at least 26 different genotypes of the virus in circulation.  The authors warned:

Added to this threat, over the past 12 months several new H5 viruses have emerged that will be competing for king of the viral hill this winter in China, including H5N8, H5N6, and H5N3.  How all of these viruses will mix and mingle over the next few months is an open question.

For more on the evolution of avian flu viruses in China, you may wish to revisit:

An Avian Flu Assessment From The Chinese Academy of Sciences

Posted by Michael Coston at 6:55 AM