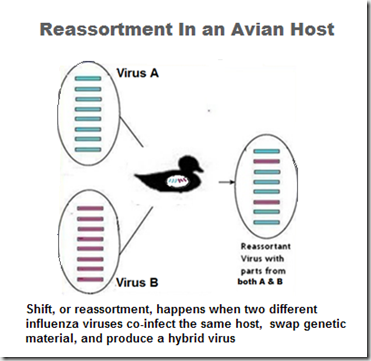 After nearly a decade during which time HPAI H5N1 virus pretty much ruled the bird flu roost, the past few years has seen the emergence of at least a half dozen new avian influenza subtypes, all of which appear to have originated when wild bird viruses reassorted in Chinese poultry.

In a case of good timing  - just two weeks before China announced their first H7N9 outbreak - we saw a report published in the EID Journal: Predicting Hotspots for Influenza Virus Reassortment, that pegged Eastern China as one of the world’s most fertile regions for producing new flu subtypes (see also Viral Reassortants: Rocking The Cradle Of Influenza).

We’ve seen numerous H5s, H7s, and H10s emerge out of China over the past few years, and almost all of them have a common denominator:

While their HA and NA genes differ, their internal genes all carry contributions from the H9N2 avian virus.

H9N2 is considered a low path avian virus, and despite aggressive vaccination policies in China, it has become rife in Asian poultry.

Last month, in PNAS: Evolution Of H9N2 And It’s Effect On The Genesis Of H7N9, we looked at a study that found a new, better adapted genotype  (G57) of the H9N2 virus had emerged  – one that evades the poultry vaccines currently in use – and that it has become widespread among vaccinated Chinese poultry since 2010.

These failures are not unique to the H9N2 vaccines, as we’ve seen this process described recently with H5 vaccines as well (see EID Journal: Subclinical HPAI In Vaccinated Poultry – China & Egypt: A Paltry Poultry Vaccine).

While the growing constellation of H5 viruses, along with H7N9, are currently viewed as our biggest avian flu threats, in late 2013 and early 2014 we saw three H10N8 infections in China (2 fatal), all linked to poultry exposure (see HK CHP Notified Of Fatal H10N8 Infection In Jiangxi).

Human infections with H10 viruses have only rarely been reported in the past, with H10N7 detected in two children in Egypt in 2004 (see Avian Influenza Virus A (H10N7) Circulating among Humans in Egypt) and among a handful of abattoir workers in Australia in 2012 (see EID Journal: Human Infection With H10N7 Avian Influenza).

But unlike these recent H10N8 cases, their illnesses were described as mild, and of short duration.

A side note, we also looked at a recent outbreak of H10N7 in European seals (see Avian H10N7 Linked To Dead European Seals), with warnings to the public to avoid contact.

Suddenly H10 viruses were on our radar, and while it wasn’t immediately clear how much of a threat they posed (to the poultry industry, or to human health), scientists were eager to investigate.  A couple of recent examples include:

Yesterday the Journal of Virology published a paper, authored by some of the biggest names in avian flu research, that looks at the emergence, evolution, and spread of H10 avian influenza viruses in China.  Not only have they found the incursion of new H10N8 viruses into Chinese poultry, they’ve also found H10N6 variants as well.

While the full study is behind a pay wall, we have the following abstract.

The H10N8 human infection cases identified in late 2013 and early 2014 in Jiangxi, China have raised concerns over its origin, prevalence and development in this region. Our long term influenza surveillance in the past 12 years on poultry and migratory birds in southern China showed that H10 influenza viruses have been introduced from migratory to domestic ducks over several winter seasons at sentinel duck farms at Poyang Lake where domestic ducks share their water body with over-wintering migratory birds.

H10 viruses were never detected in terrestrial poultry in our survey areas until August 2013 when they were identified at live poultry markets in Jiangxi. Since then, we have isolated 124 H10N8 or H10N6 viruses from chickens at the local markets, revealing an ongoing outbreak.

Phylogenetic analysis of H10 and related viruses showed that the chicken H10N8 viruses were generated through multiple reassortments between H10 and N8 viruses from domestic ducks and the enzootic chicken H9N2 viruses. These chicken reassortant viruses were highly similar to the human isolate, indicating the market chickens were the source of the human infection.

Recently, the H10 viruses further reassorted, apparently with H5N6 viruses, and generated an H10N6 variant. The emergence and prevalence of H10 viruses in chickens and the occurrence of human infections provide direct evidence of the threat from the current influenza ecosystem in China.

For now it isn’t at all clear how much of a threat H10N8, H10N6, or any other H10 subtype poses, but the fact that we continue to see this surge in new avian subtypes is a genuine concern.

Simply put, the greater the number of avian viruses in circulation, the more opportunities there will be for new subtypes, clades,and variant viruses to form.

And anytime you add complexity to a system, your chances of seeing an unwanted result go up.