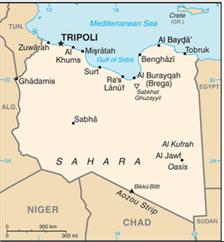 
In late December of 2014, in Media Reports: 4 H5N1 Deaths In Libya, I wrote about persistent rumors of a deadly outbreak of H5N1 in war-torn Libya. The following day, in Libyan MOH: Statement On Severe Pneumonia Cases, we saw a vague statement blaming H1N1, and `Influenza A'  for several recent pneumonia deaths, an admission that some patients went untested, but no mention of H5N1.

While the FAO has reported a small handful of H5N1 outbreaks in poultry since 2014, in the latest (Feb 2016) WHO List of Cumulative number of confirmed human cases for avian influenza A(H5N1), Libya remains conspicuously absent.


Like in so many other-strife ridden, low resource, countries - we only get a partial glimpse of what is going on when it comes to infectious disease outbreaks.  Outside of Egypt, in Africa only two human infections have ever been confirmed by the WHO; one in Djibouti in 2006, and one the following year in Nigeria.

There were three other suspected Nigerian cases at the time  - including the mother of the confirmed case in Lagos – but testing was `inconclusive’.

Last summer, in FAO: Concerns Rising Over Spread Of Avian Flu In Africa and again last October in WHO Scales Up Influenza Surveillance In Africa we looked at growing concerns over the recent spread of highly pathogenic avian flu in Africa and the very limited surveillance and reporting from the region.


Late last week I ran across an Arabic news report of an Avian Flu workshop sponsored by the FAO in Libya, which seemed to confirm human H5N1 cases in Libya, but the translation was a bit murky.

Over the weekend, Shiloh on FluTrackers, found and posted the English language FAO report (see below), which cites `at least 4 deaths' due to H5N1 in Libya, and more than 100 suspected or confirmed poultry outbreaks.


While hardly a surprise given the reports we've seen over the past 18 months, this does reinforce the notion that `no news isn't necessarily good news' and that H5N1 is more pervasive (and infects more humans) than the `official record' would have us believe.


March 16, 2016/Libya--The Food and Agriculture Organization of the United Nations (FAO) held today its first inception workshop on "Emergency assistance for the control of Highly Pathogenic Avian Influenza in poultry and other domestic birds in Libya."

"The first outbreak of highly pathogenic avian influenza (HPAI) was reported in the Libya in December 2014. The spread of HPAI since its first detection in Libya has been progressive. During 2014-2015, HPAI had negative impact on the farmers and the country's economy and caused death of at least four people since December 2014. A further spread of HPAI in Libya would be an increased risk to public health and livestock sector not only in the country but also in the region."

"In addition to human cases, the disease has caused significant economic losses to farmers estimated at more than USD 10 million. Due to the lack of qualified human resources and lack of appropriate equipment, these outbreaks were not deeply investigated. The present project aims to assist the Libyan Veterinary Services to stop the spread of HPAI "H5N1" and reduce its negative impact on human health and food security through reinforcement of management capacities of the current health crisis", Thombiano concluded.

The inception workshop aims to build common understanding on the background, concept, objectives, expected outputs and implementation strategies of the project; the participants came from Libya (Tripoli and Al-Baida) despite of logistical challenges.

The workshop was attended by experts from the FAO sub-regional office in Tunisia and experts from FAO HQ in Rome.

The workshop offered an overview on the situation of Highly Pathogenic Avian Influenza in the world and Libya, and the participants were divided in three working groups to achieve three outputs: output 1, HPAI control Strategy and contingency plan are reviewed and improved; output 2, Capacities of the veterinary services are strengthened; output 3, HPAI situation is better known and the appropriate control strategy is implemented. The workshop concluded its activities by validation of the project work plan.

Posted by Michael Coston at 7:22 AM