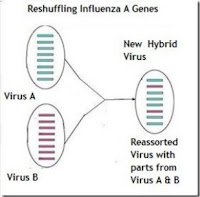 
Under the right conditions, they can swap one or more gene segments and produce a new, hybrid virus. Luckily, most of these genetic experiments are evolutionary failures; unable to compete with the existing wild viruses, and so they fade away quickly.

Every once in awhile, however, a new one appears that is both biologically fit and capable of spreading between hosts. And in recent years we've seen a growing number of new flu viruses turn up in the wild.

In 2013, just two weeks before we first learned about China's newly emerging H7N9 virus, in EID Journal: Predicting Hotspots for Influenza Virus Reassortment, we looked at a study that identified 6 key geographic regions where reassortments are likely to emerge.

And high on that list (you guessed it), was Eastern mainland China.

In 2013, in addition to H7N9, China reported a new lineage of H7N7 (see Nature: Genesis Of The H7N9 Virus), and a never-seen-in-humans before H10N8 virus (see HK CHP Notified Of Fatal H10N8 Infection In Jiangxi).

In 2014 two other new viruses - H5N8 and H5N6 - emerged from China, with the former spreading rapidly to Korea, Europe, Taiwan, and North America and the latter continuing to crop up in China, Vietnam, and Laos.


And these are just the main avian `players', there are others in China - including H9N2, H5N5, H5N9, H6N1 - and a whole host of novel swine viruses as well.

Among this second tier of avian viruses, H9N2 holds a special place, as it has lent some of its internal genes - via reassortment - to a large number of emerging flu viruses over the past couple of decades, including H5N1, H7N9, H5N6, and H10N8 (see PNAS: Evolution Of H9N2 And It’s Effect On The Genesis Of H7N9).


Two years ago, in an EID Journal Dispatch (Novel Influenza A(H7N2) Virus in Chickens, Jilin Province, China, 2014), we saw yet another reassortment of the H7N9 and H9N2 virus produce a novel virus; H7N2.  From the Abstract:

In February 2014, while investigating the source of a human infection with influenza A(H7N9) virus in northern China, we isolated subtypes H7N2 and H9N2 viruses from chickens on the patient’s farm. Sequence analysis revealed that the H7N2 virus is a novel reassortant of H7N9 and H9N2 viruses. Continued surveillance is needed.


Wild bird surveillance, unfortunately, is limited in China, just as it is in much of  the rest of the world. And so we've heard very little about these new H7N7 and H7N2 viruses since those initial reports.

Today, however, we have a new report in Frontiers of Microbiology, where researchers set out sentinel chickens around Taihu Lake in Wuxi City, Jiangsu - more than 1,000 km south and west of the Jilin study (above) - also in 2014.


Taihu Lake hosts  40 species of wild birds and 19 species of
resident birds and is a major stopover for migratory waterfowl. During their 10 month study, they isolated 5 avian viruses among the sentinel chickens; two H7N2, one H5N6, and two H9N2.

First the abstract, then I'll have a bit more on this open access study.

In 2014, surveillance of sentinel chicken for avian influenza virus was conducted in aquatic bird habitat near Wuxi City, Jiangsu Province, China. Two H7N2, one H5N6, and two H9N2 viruses were isolated. Sequence analysis revealed that the H7N2 virus is a novel reassortant of H7N9 and H9N2 viruses and H5N6 virus is a reassortant of H5N1 clade 2.3.4 and H6N6 viruses.

Substitutions V186 and L226 (H3 numbering) in the hemagglutinin (HA) gene protein was found in two H7N2 viruses but not in the H5N6 virus.

Two A138 and A160 mutations were identified in the HA gene protein of all three viruses but a P128 mutation was only in the H5N6 virus. A deletion of three and eleven amino acids in the neuraminidase stalk region was found in two H7N2 and H5N6 viruses, respectively. Moreover, a mutation of N31 in M2 protein was observed in both two H7N2 viruses.

High similarity of these isolated viruses to viruses previously identified among poultry and humans, suggests that peridomestic aquatic birds may play a role in sustaining novel virus transmission.

Therefore, continued surveillance is needed to monitor these avian influenza viruses in wild bird and domestic poultry that may pose a threat to poultry and human health.


The full text of this open access study is available at the link above, and is well worth reading.  While it deals with H5N6, H9N2, and H7N2, we'll focus on the newest of these subtypes (H7N2) for today's blog.

The detection of multiple reassortant H7N2 viruses - both in 2014 and more than 1,000 km apart - makes this subtype likely more than just a flash in the pan.

A molecular analysis (available in the full text of the study) found the H7N2 virus - like its parental H7N9 virus - is likely to have low pathogenic effects in poultry. A `stealth' factor that - like with H7N9 - makes it difficult to detect.

The did note, however:

Purely avian viruses bind preferentially to α2,3-linked sialic acid receptors.  A switch to α2,6 receptor cells - which line the human upper respiratory tract - is viewed as one of the essential steps needed for a flu virus to adapt to a human host.

So far, we've not seen any evidence of human H7N2 infection in China, which may indicate the virus has not yet gained the ability to infect humans.


Another possibility is that it can sometimes infect humans, but doesn't produce serious enough illness to require hospitalization, and therefore hasn't been detected by China's influenza surveillance system.

Either way, H7N2 adds to the growing constellation of flu viruses circulating - and continually evolving - in China. And given its detection in two widely separated provinces more than two years ago, is probably more prevalent than we know.