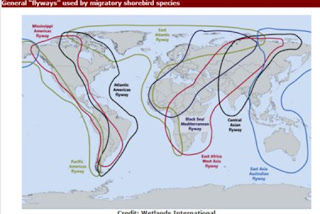 
By just about any metric you'd care to use, the global spread and evolution of avian influenza viruses over the past 6 months has been unprecedented. Along the way, more than a few assumptions of how these viruses are supposed behave have fallen by the wayside.

A `short list' of firsts, or changes in behavior since last summer include:

But perhaps most impressive, has been the persistence of HPAI H5 in both Europe and Asia's wild and migratory bird population.


The most recent update from France's ESA (dated Feb 28th) lists nearly 1,100 HPAI H5 wild bird detections across 73 species, although Germany's FLI characterizes this as likely just the `tip of the iceberg'.  They write:

As at present mainly wild birds which have been found dead are investigated, it is unknown which other bird species may possibly carry the virus and do not develop symptoms of disease or die. It must be concluded that there is an ongoing HPAI H5N8 epidemics among wild water bird species and that the dead birds found possibly represent no more than the tip of the iceberg.


By contrast, during North America's 6 month epizootic in 2015, fewer than 100 wild and migratory birds were found infected with HPAI H5, with no large die offs of birds reported.


After losing 50 million birds to H5N8 in the spring of 2015 (and making a much smaller impact in Europe), the virus - to everyone's surprise - was a no-show for the fall, winter, and spring of 2015-2016. While we saw some scattered reports from South Korea, China and Taiwan, those numbers were greatly reduced as well.


The lack of detectable HPAI H5 in North America's bird population during, and after, our own epizootic led researchers to conclude that wild and migratory waterfowl were not an efficient  long-term reservoir for highly pathogenic avian flu viruses.(see PNAS: The Enigma Of Disappearing HPAI H5 In North American Migratory Waterfowl).


An excerpt from a press release on this study reads:


The lead author, Dr. Robert Webster explained. "Existing immunity in wild birds is one of the possible explanations that may explain why highly pathogenic influenza A viruses do not become established in wild bird populations."

The $64 question - as yet unanswered - is whether the recent changes to Europe's  H5N8 virus have moved it towards a strain that can sustain itself in the migratory waterfowl population.


It is a possibility obliquely hinted at in last November's  EID Journal: HPAI A(H5Nx) Viruses With Altered H5 Receptor-Binding Specificity, where researchers postulated:

`Altered receptor-binding properties might affect the balance between HA and NA, enable the virus to acquire different NA subtypes, and might result in altered host range and spreading.'


We've already seen the acquisition of different NA subtypes (H5N5, H5N6) and the list of avian species found carrying H5Nx in Europe this winter continues to expand at an impressive rate.


All of this is of more than of just academic interest.

Despite HPAI H5's substantial territorial gains to date, its inability to sustain itself in migratory waterfowl has almost certainly had a dampening effect on its proliferation.  It has also made it possible for many countries (particularly in Europe and North America) to successfully control the virus in poultry by culling, an option that would become less tenable should these viruses become endemic in wild and migratory birds.

Endemicity in wild or migratory could also help drive the virus's evolution, as the more viruses it encounters, and the more hosts its infects, the more opportunities it would find to either reassort or adapt.


Last August, in Sci Repts.: Southward Autumn Migration Of Waterfowl Facilitates Transmission Of HPAI H5N1, published an analysis that found that southbound migratory birds in the autumn - coming from their northern breeding sites - are far more likely to spread HPAI than the northbound flocks in the spring.

These researchers suggested that immunologically naive juveniles - born over the summer - were most likely to carry and spread HPAI viruses during the fall migration.


The reports of HPAI H5N8's arrival last fall - first showing up in India, then spreading across Europe, the Middle East, and Into Africa -  certainly seems to fit this model.  But over the next few months we'll be watching for any signs of increased outbreaks as the spring migration moves north across Europe and Asia.

But more importantly will be what happens when millions of migrating birds - some likely carrying HPAI viruses - return to their summer roosting areas in Siberia, Mongolia, Northern Canada and the Arctic.

Will the spread of HPAI H5Nx create enough immunity in the avian population to burn itself out?  Or will it return with a vengeance (and possibly new subtypes) next fall?


Reasonable arguments can be made for either scenario. Despite attempts at surveillance over the summer, we may not know the answer until next fall's migration arrives in Europe, Asia, or North America.


The only thing we can say with certainty is that avian flu's great global field experiment continues - and given the impressive strides we've seen this winter, and the ever increasing number of genetic parts in motion - we need to be prepared for surprises.
Posted by Michael Coston at 11:05 AM