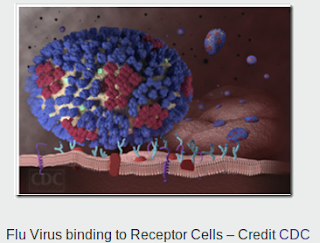 
One of the topics we've revisited often in this blog is just how much a `player'  LPAI H9N2 is in the world of avian flu. By itself, it produces mostly mild or moderate illness in humans, but its internal genes can be found in the backbone of many of the HPAI viruses (including H5N1, H5N6, and H7N9) that pose the greatest risks to both poultry, and human health.

H9N2 can and does (on occasion) infect humans, albeit usually producing only mild to moderate illness. Two months ago, in Macao Health: Guangdong Province Reports Human H9N2 Infection, we looked at a recent case involving a 24-year old woman from Shenzhen.

Over the past two decades, more than 3 dozen human H9N2 infections have been reported by 3 countries - China, Pakistan & Egypt - (see FluTrackers Global Cumulative H9N2 Partial Case List 1998-2017), but seroprevalence studies of poultry workers where the virus is endemic suggest this is a significant under count.


While it may well be due to better testing and surveillance, we've seen a decided uptick in reported cases in the past 3 years. At the same time, we've seen the H9N2 virus acquire `mammalian adaptations' that could increase its ability to infect humans.

As far back as 2010 (see Study: The Continuing Evolution Of Avian H9N2) we looked at computer modeling (in silica) that warned the H9N2 virus has been slowly evolving towards becoming a `more humanized’ virus.


The amino acid sequence alignment results showed that several mutations for human infection tropism presented in the two virus strains, including Q226L, H183N and E190T in HA; S31N in M2; 63-65 deletion in NA. In addition, the H9N2 influenza virus strains possessed the PSRSSR\GL motif in HA.

This Q226L amino acid substitution - where the amino acid glutamine is replaced by leucine - is a commonly found in human flu viruses, not avian.


The H9N2 virus strain Env/9306 contains mammalian-like mutations in genes, including HAQ226L (H3 numbering) (5), which increase H9N2 virus transmissibility to and among mammals.

And just over a year ago, in Three Mutations That Switch H7N9 To Human-type Receptor Specificity, G228S and Q226L were both called out at being instrumental in changing H7N9 into a more humanized virus.


The majority of human H7N9 isolates contained a hemagglutinin (HA) mutation (Q226L) that has previously been associated with a switch in receptor specificity from avian-type (NeuAcα2-3Gal) to human-type (NeuAcα2-6Gal), as documented for the avian progenitors of the 1957 (H2N2) and 1968 (H3N2) human influenza pandemic viruses.

For a more in-depth look at this topic, you may wish to visit JVI's Role of Substitutions in the Hemagglutinin in the Emergence of the 1968 Pandemic Influenza Virus.

Add in H9N2's ability to infect other mammalian species (see H9N2 Adaptation In Minks and in pigs) and its ability to reassort with other avian viruses (see A Canine H3N2 Virus With PA Gene From Avian H9N2 - Korea) and you have a very versatile virus indeed.


All of which brings us to an excellent open-access review in the Journal Veterinary Sciences, on the zoonotic risk of H9N2.  This report is quite detailed, and much to lengthy for me to do more than pull out a few excerpts.

Follow the link below to read this report in its entirety.

Poultry-adapted H9N2 avian influenza viruses (AIVs) are commonly found in many countries in Asia, the Middle East, Africa, and Europe, and although classified as low pathogenic viruses, they are an economically important disease. Besides the importance of the disease in the poultry industry, some H9N2 AIVs are also known to be zoonotic.

The disease in humans appears to cause primarily a mild upper respiratory disease, and doesn’t cause or only rarely causes the severe pneumonia often seen with other zoonotic AIVs like H5N1 or H7N9. Serologic studies in humans, particularly in occupationally exposed workers, show a large number of people with antibodies to H9N2, suggesting infection is commonly occurring.

Of the four defined H9N2 poultry lineages, only two lineages, the G1 and the Y280 lineages, are associated with human infections. Almost all of the viruses from humans have a leucine at position 226 (H3 numbering) of the hemagglutinin associated with a higher affinity of binding with α2,6 sialic acid, the host cell receptor most commonly found on glycoproteins in the human upper respiratory tract.

For unknown reasons there has also been a shift in recent years of poultry viruses in the G1 and Y280 lineages to also having leucine instead of glutamine, the amino acid found in most avian viruses, at position 226. The G1 and Y280 poultry lineages because of their known ability to infect humans, the high prevalence of the virus in poultry in endemic countries, the lack of antibody in most humans, and the shift of poultry viruses to more human-like receptor binding makes these viruses a human pandemic threat.

Increased efforts for control of the virus, including through effective vaccine use in poultry, is warranted for both poultry and public health goals.

The H9N2 viruses have been detected in a variety of mammalian species including humans, swine, dogs, weasels, and mink. The detection of virus from many mammalian species have been as part of routine surveillance of healthy animals, but in several cases were associated with clinical disease. Because of the concern about zoonotic infection with H9N2 viruses, many different animal models have been used to evaluate their potential for infection for humans. Unfortunately no single animal model species has proven to be a reliable predictor of human infections, but these studies do highlight the risk of human infection.

Swine have been a major concern for spread of influenza to humans because they are potential “mixing vessels” for avian, swine and human influenzas because they contain both α2,3 and α2,6 sialic acid in their upper respiratory tract and can potentially be infected by both avian, human, and swine influenza viruses. Novel viruses could emerge in swine through drift or shift potentially leading to pandemic strains [14,35]. In the late 1990s, H9N2 was isolated in swine and during the first decade of the 21st century, it was common to find H9N2 in swine in many parts of China [14]. As many as ten genotypes of H9N2 have been characterized in swine in China [35].

As one of the most prevalent AIV subtypes circulating in poultry around the world, H9N2 should be at the forefront of efforts to prevent its spread amongst poultry and the secondary spread to humans and other species. The Y280 and G1 lineages of H9N2 are poultry adapted and have spread throughout Eurasia and Africa and have become endemic in many countries.

Preventing a pandemic with H9N2 is possible with the right strategy for controlling H9N2 in poultry. This includes implementation of monitoring programs, vaccination, good biosecurity at farms and LBMs as well as implementing rest days at LBMs. All these efforts to reduce the number of H9N2 infections in poultry and prevent the spread of the virus to mammals and humans will require a lot of resources. If we can control the transmission of H9N2 in poultry and prevent humans from contracting this disease, we will greatly reduce the risk of human-to-human transfer and potentially prevent a pandemic.