More Reports of Pig and Poultry Die Offs In Indonesia 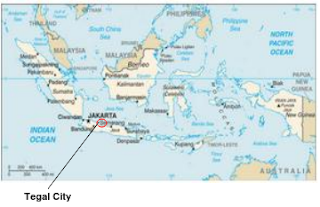 Indonesia - once the world's hotbed for avian flu - has reported very little bird flu activity over the past few years, as the local strains of H5N1 appear to have attenuated over time due to viral mixing, and the use of poultry vaccines may have masked symptoms of infection.


Indonesia's last reported human H5N1 infection was in 2017, but the virus is still endemic in the region.

Several days ago, in Watching Indonesia Again For Avian Flu, we saw a flurry of media reports of poultry die offs in Tegal city, in central Java, that were assumed to be due to avian flu.  Since then, other communities (including Ceribon and Brebes) have reported large, sudden losses of poultry.

Testing is reportedly underway, at least on some of the birds, as many were quickly burned and buried by locals. Results could take a week or longer to be made public.

Head of the Department of Animal Husbandry and Animal Health (DPKH) Brebes, Ismu Subroto said it was doing research related to the present invention. And the result was suspect bird flu, because there has been no confirmation of the diagnosis.

Tegal - After dozens of deaths and culling of chickens due to bird flu, a team from the Directorate General of Livestock and Animal Health (PKH) Center for Veterinary Wates, Yogyakarta went to the location in the Village findings Keturen District of South Tegal Tegal City on Thursday (17/10) afternoon. They want to take blood samples of poultry remaining in the local area.

At this point, it isn't clear whether this is a resurfacing of Indonesia's existing H5N1, a new reassortment, or perhaps a different subtype entirely. Indonesia lies under the East Asian-Australian Flyway migratory bird flyway, and has yet to deal with H5N8 or H5N6, which has plagued other countries in the past few years.

Meanwhile, reports of pig die offs continue as well (see last week's Indonesia: Media Reports Of Unexplained Pig Deaths In Multiple Regions), with concerns that they may be due to either Classical Swine Fever (CSF) or African Swine Fever (ASF). A search in Bahasa for `dead pigs' (`Babi Mati') returns several new reports, including: 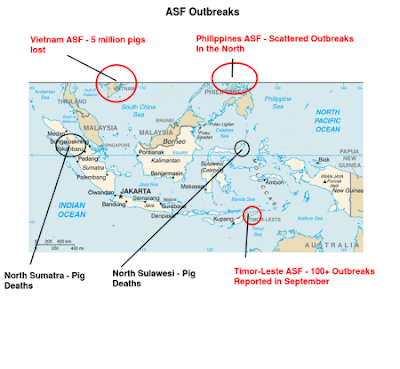 Every day, the number of dead pigs, increases. There is a possibility, threatening the population of 110,000 head of pigs in Dairi.

Dairi - The death of pigs in Dairi, North Sumatra, has been in the category of an outbreak.

Data compiled, according reports from the public, as of October 17, 2019, the number of 1,004 dead pigs tail. Material losses estimated at Rp 700 million.

Every day, the number of dead pigs, increases. There is a possibility, threatening the population of 110,000 head of pigs in Dairi.

This type of virus, has yet been found. 12 samples examined Institute of Veterinary Regional I Medan , three positive samples of hog cholera. 9 samples again, unconfirmed, but the suspect (allegedly) African Swine Fever (ASF).


While ASF isn't a human health threat, it is a serious threat to the agricultural economy and to local food security, and pigs deaths can also signal other, equally concerning infections.


Surveillance, testing, and reporting out of Indonesia - particularly since the eviction of our NAMRU (Naval Medical Research Unit) 2 lab  a decade ago - has been spotty at best.

Hopefully we'll get some solid information on these two (likely, unrelated) outbreaks sooner rather than later.
Posted by Michael Coston at 8:27 AM