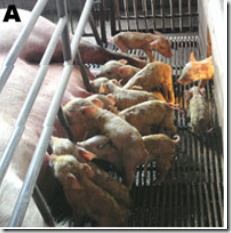 
On Friday, Johns Hopkins Center For Health Security (JHCHS) - in concert with the World Economic Forum and the Bill & Melinda Gates Foundation - hosted a half-day table top pandemic exercise (#Event201) in NYC, parts of which were live streamed on the Internet to a couple of hundred people that participated in their own moderated discussions.


Despite some early hiccups in the video feeds (which were resolved quickly), this online discussion was both lively, and informative.

Although opinions over priorities differed, the primary take-away I think was there are no easy solutions in a pandemic. Everything desperately needed is heavily interconnected - essential services (food, water, power, security), healthcare, and vaccine development - and if you shortchange one, you can easily derail the others.


I look forward to seeing the full exercise when it is released.

But in the meantime, I thought we'd take a look at the fictional pandemic virus created for use in this week's exercise - CAPS (Coronavirus Acute Pulmonary Syndrome) - and just how plausible a threat this type of virus might be.

Unlike last year's Clade X exercise - which envisioned a genetically altered Nipah virus (spliced onto a parainfluenza backbone) - the fictionalized CAPS virus is a naturally occurring coronavirus (not unlike SARS or MERS) which  originated in bats, but was hosted by, and emerged from pigs.

Event 201 simulates an outbreak of a novel zoonotic coronavirus transmitted from bats to pigs to people that eventually becomes efficiently transmissible from person to person, leading to a severe pandemic. The pathogen and the disease it causes are modeled largely on SARS, but it is more transmissible in the community setting by people with mild symptoms.

The disease starts in pig farms in Brazil, quietly and slowly at first, but then it starts to spread more rapidly in healthcare settings. When it starts to spread efficiently from person to person in the low-income, densely packed neighborhoods of some of the megacities in South America, the epidemic explodes. It is first exported by air travel to Portugal, the United States, and China and then to many other countries. Although at first some countries are able to control it, it continues to spread and be reintroduced, and eventually no country can maintain control.

There is no possibility of a vaccine being available in the first year. There is a fictional antiviral drug that can help the sick but not significantly limit spread of the disease.

Since the whole human population is susceptible, during the initial months of the pandemic, the cumulative number of cases increases exponentially, doubling every week. And as the cases and deaths accumulate, the economic and societal consequences become increasingly severe.

The scenario ends at the 18-month point, with 65 million deaths. The pandemic is beginning to slow due to the decreasing number of susceptible people. The pandemic will continue at some rate until there is an effective vaccine or until 80-90 % of the global population has been exposed. From that point on, it is likely to be an endemic childhood disease.


They fleshed out this fictional pathogen even further in a document called CAPS: The Pathogen and Clinical Syndrome (PDF), including:
Essentially, something a bit more transmissible, but comparable in severity to the 2003 SARS epidemic - but not as deadly as the current, albeit highly scattered outbreaks of MERS we've seen over the past 7 years.

The choice of pigs as intermediary hosts is highly plausible. There are already several porcine coronaviruses circulating in pigs, which has raised concerns over their ability to further expand their host range (see SECD: Another Emerging Coronavirus Threat).

Two years ago, in EID Journal: A New Bat-HKU2–like Coronavirus in Swine, China, 2017, we saw a study that described the recent discovery of a new HKU2-like coronavirus in Chinese pigs showing symptoms of PED, which had tested negative for the usual suspects.


HKU2 is one of a number of coronaviruses discovered in the wild (in this case, in Horseshoe bats) by Hong Kong researchers in the years immediately following the SARS epidemic.

As pigs are physiologically fairly close to humans (if that bothers you, think how the pig feels), we watch porcine adapted viruses with particular interest. Even more so when they are descendant from bats, which tends to up the ante (see Curr. Opinion Virology: Viruses In Bats & Potential Spillover To Animals And Humans).


A non-influenza pandemic virus - such as envisioned by Clade X and Event 201 - complicates the pandemic response immensely.

When graded on the curve, we're pretty good at creating, and manufacturing influenza vaccines. Producing an emergency influenza pandemic vaccine in quantity within the first year - while fraught with difficulties (see Pandemic Flu Vaccines: Easier Said Than Done) - is at least technically possible.

But scientists have been trying to create a SARS coronavirus vaccine for 15 years, and a MERS-CoV vaccine for the past 7 years, and so far no safe and effective vaccine has been created.


We might get lucky, and a breakthrough could happen, but it is doubtful.

At this point, I would remind my readers that nearly every `pandemic Plan' drafted by U.S. states (and many nations) over the past 15 years envisions a less  than 2% fatality rate, the availability of effective antivirals, and a vaccine being produced starting after about 6 months.

Like generals always planning to fight the last war, we seem fixed on the notion that the next pandemic will be very much like the last two (2009 and 1968), which paled in comparison to 1918.


Once again, we could get lucky.  But at some point, that luck will run out.

While the outcome at 18 months in this pandemic scenario (65 million deaths) is horrific, it isn't the worst case scenario. And it isn't clear from the exercise materials how many collateral deaths - those not directly related to virus - would occur.


But what is clear is we are far from being ready to deal with a severe pandemic. Even one half as bad as the one depicted in Event 201.

Just over a decade ago, then Secretary of HHS Michael O. Leavitt famously said:


"Any community that fails to prepare with the expectation that somehow the federal government will come to their rescue at the last moment will be tragically disappointed."

Hopefully pandemic exercises like Event 201 and Clade X will help convince business, government, and community leaders to revive our long-neglected pandemic preparedness programs before the clock runs out again.

For more on the Event 2001 Table top exercise, you may wish to visit their resources page:


Communication in a pandemic (PDF)

Finance in a pandemic (PDF)

Posted by Michael Coston at 9:08 AM