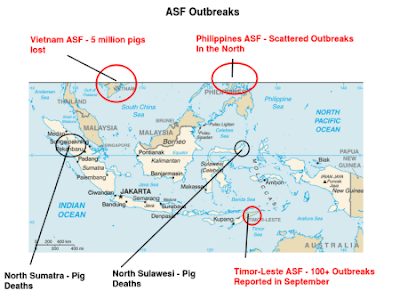 For roughly a month we've been following media reports of thousands of pig deaths in Indonesia (see here,  here, and here), which - while tests are usually described as `pending' - have been preliminarily blamed on `Hog Cholera', which usually describes Classical Swine Fever (CSF).


As the map above illustrates, Indonesia is more or less surrounded by nations that have recently reported African Swine Fever, which has killed tens of millions of pigs across Asia over the past year.

In recent days, media reports on `Babi Mati' - aka `pig deaths'  have increased, along with reports of the illegal dumping of dead pigs into lakes and streams (see Dead pigs Dumped in the River Bedera, Public Advised Not Use water).

As recently as two days ago, headlines (based on statements by the MOA) still proclaimed `Dead pigs in North Sumatra result of Hog Cholera Virus Not ASF', but over the past 24 hours new test results have emerged suggesting that ASF has been confirmed in at some of the pig deaths.


Despite these reports, I've yet to find an official announcement on the Indonesian Ministry of Agriculture website, or an OIE notification.

There are literally dozens of Indonesian media reports of positive test results overnight, many quoting statements made by Fadjar Sumping Tjatur Rassa, the Agriculture Ministry’s director of animal health. But a few links to English Language reports follow.

Indonesia is primarily a Muslim country, but it produces roughly 8 million pigs a year, primarily for consumption by ethnic Chinese and Christian tribes.  The economic impact there would likely be considerably less than in other, major pig producing countries.

The bigger concern is that if ASF is confirmed in Indonesia, it would provide yet another stepping stone for the virus, as it wends its way through the Western Pacific region, and potentially points east and west.