Florida, with 20 million residents and tens of millions of visitors each year, has been testing for COVID-19 for barely a week, and only 5 days ago confirmed their 1st  2 Presumptive Positive COVID-19 Cases.


Testing, however, remains quite limited (100 negative results, 6 positive), and so we really have no idea how prevalent the virus might be in our population.  This deficit in testing is not unique to Florida, or to the United States.

Overnight, however, we've learned of two new COVID-19 cases, and two deaths.  This from Florida's Department of Health.

Tallahassee, Fla. — The Florida Department of Health has announced updates regarding the 2019 coronavirus disease (COVID-19) in Florida. Two individuals have died and two new presumptive positive cases have been identified in Broward County.

A new individual in their seventies that tested presumptive positive for COVID-19 in Lee County has died, following an international trip.

A 75-year old male in Broward County has been identified as a presumptive positive. This person is isolated and will continue to remain isolated until cleared by public health officials.

A 65-year old male in Broward County has been identified as a presumptive positive. This person is isolated and will continue to remain isolated until cleared by public health officials.

The Florida Department of Health is working closely with the patients, potential close contacts of each case and health care providers to isolate and monitor persons who may have been exposed to COVID-19 and implement testing of anyone who may develop COVID-19 symptoms, including fever, cough or shortness of breath.


While the number of confirmed cases in Florida remains reassuringly small - at least when compared to Washington State (n=79) and New York (n=44) - the limited testing to date leaves a lot of room for undetected cases, and deaths.

This is flu season, we have a large elderly population, and many people are hospitalized with ILIs (Influenza-Like-Illnesses).  Having worked as a paramedic here, I can attest to the fact that hundreds of (mostly) elderly people die of `natural causes' each day - and the cause of death is almost never confirmed.


This is why it is so hard to tell how many people die from the flu each year.  Influenza almost never appears on a death certificate as a primary cause of death.

If the patient is elderly, and there are no `unusual circumstances' surrounding the death, the patient's doctor generally signs the death certificate, attributing COD to heart attack, stroke, COPD, or other chronic condition.


As we've discussed often, heart attacks and strokes are linked to recent flu infections (see Eur. Resp.J.: Influenza & Pneumonia Infections Increase Risk Of Heart Attack and Stroke) and most of those deaths are attributed to cardiovascular - not viral - causes.

Two weeks ago, Italy and Iran were both posting reassuringly low, double digit COVID-19 case counts. Today, those two countries have identified close to 10,000 cases, a great many of which were already infected when their surveillance was still reporting only a handful of cases.

Even when we have point-of-care diagnostics and excellent lab testing and surveillance - as we do for influenza - the CDC can only estimate the number of cases each year, how many of those are hospitalized, and how many deaths. 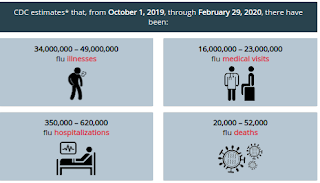 Without extensive testing, we have no way of knowing how many of these flu deaths might have been due to COVID-19.  Probably not a huge number yet, but nobody really knows.

Ten years after the 2009 H1N1 pandemic, researchers are still arguing its impact. Early estimates (see Lancet: Estimating Global 2009 Pandemic Mortality) - released during the pandemic by WHO - now appear to have captured as little as 5% to 7% of the true number of deaths.

We will likely see the same thing happen with COVID-19.  The number of cases, and deaths, reported in real time during the next few months will only reflect a fraction of the true burden.

For now, perhaps the best way to get a crude estimate of the severity of COVID-19 is by the impact it has on hospitals and healthcare delivery, the economic losses attributed to the epidemic, and the severity and duration of societal disruptions.


Governments, and the media, love to report numbers. The public expects them, as they provide a sense of certainty, and of things being under control.

But with infectious diseases - particularly during an epidemic - they should never be assumed to reflect the true burden of an outbreak.
Posted by Michael Coston at 2:50 AM