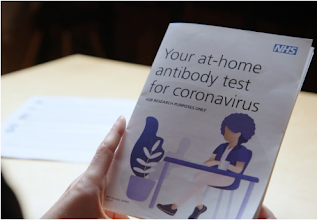 It was a simpler time 6 months ago.

The newly emerged SARS-CoV-2 pandemic virus was still thought of as primarily a pulmonary infection. One to which children were largely `immune', and that only rarely seriously impacted those under the age of 65.  Asymptomatic carriage and transmission was unproven and believed to be rare.

And the prevailing theory was - once infected - survivors have either long-term or life-time  protective antibodies.

The pandemic would end once `herd immunity' of  60%-80% could be achieved, and a few countries were suggesting they were already substantially on their way to that goal.

Some countries even considered adopting a passive approach (see The UK's COVID-19 Response Gamble : Business As Usual), gambling that letting the virus run its course would be less economically painful than a long, drawn out viral siege.

Then the hospital ICUs began to fill rapidly, and deaths began to rise to politically untenable levels, and courses were quickly reversed.

Since then it has become apparent that COVID-19 is a far more insidious disease, affecting not only the lungs, but the heart, the brain, and other organs (see Nature Med. Review: Extrapulmonary manifestations of COVID-19).  Children were starting to show up in ICUs with a severe inflammatory syndrome, and evidence of asymptomatic transmission was mounting.

Even worse, by April early assumptions about long lasting acquired immunity were beginning to fray around the edges (see COVID-19: From Here To Immunity). The assumption that we could achieve herd immunity - either via natural infection or a vaccine - was increasingly being questioned.

Since then, additional studies have raised even more concerns.

Less than a month ago, the Journal Nature published.
(Excerpt)

16 July — Antiviral antibodies peter out within weeks after infection

Key antibodies that neutralize the effects of the new coronavirus fall to low levels within months of SARS-CoV-2 infection, according to the most comprehensive study yet.

However, in most people, antibody levels began to fall about a month after symptoms appeared, sometimes to nearly undetectable levels — raising questions about the durability of vaccines designed to promote the production of neutralizing antibodies.

As I pointed out in my blog at the the time.

`. . . nAb titers aren't the only measure of potential post-infection immunity, as the role of T-Cells in fighting this virus is poorly understood.  Still, these results give pause, as it suggests many people - particularly those who had a mild first illness - may become susceptible to re-infection within months of recovery.'

While the amount and duration of antibody protection one gets following infection remains unclear, the other half of the herd immunity equation is the percentage of the population that has been exposed (or eventually, vaccinated) and now carries detectable SARS-CoV-2 antibodies.
In an attempt to answer that question in England - one of the hardest hit countries in Europe - Imperial College London in conjunction with the NHS has conducted a SARS-CoV-2 antibody prevalence study on over 100,000 adults who used an at-home self-administered antibody test kit between June 20 and July 13.
These test kits are described in a ICL news article called Biggest study on antibody finger-prick tests identifies promising kits by Justine Alford, which found the Fortress test had a high specificity (98.6%), and moderate sensitivity (84%).

In other words, the test reliably detects antibodies 84% of the time and correctly identified the absence of antibodies 98.6% of the time.  When combined with its ease of use, this test was selected for the antibody prevalence study.

The results of the actual study were released today, in the form or a pre-print article, a press release from Imperial College London, and a release from the UK's Department of Health and Social Care.

Highlights of this study's findings include:

First stop, the abstract from the 20-page study:

Antibody prevalence for SARS-CoV-2 following the peak of the pandemic in England: REACT2 study in 100,000 adults

England, UK has experienced a large outbreak of SARS-CoV-2 infection. As in USA and elsewhere, disadvantaged communities have been disproportionately affected.

The pandemic of SARS-CoV-2 infection in England disproportionately affected ethnic minority groups and health and care home workers. The higher risk of infection in these groups may explain, at least in part, their increased risk of hospitalisation and mortality from COVID-19.

Next stop, a lengthy news article from Imperial College London.

Largest study on home coronavirus antibody testing publishes first findings
by Justine Alford13 August 2020
More than 100,000 people across England have tested themselves for SARS-CoV-2 antibodies at home as part of a major research programme.
Led by Imperial College London, the REACT (REal Time Assessment of Community Transmission) study is using antibody finger-prick tests to track past infections and monitor the progress of the pandemic. It’s the first nation-wide antibody surveillance study to be rolled out across England using self-testing at home.
The findings, available in a non-peer-reviewed report submitted to medRxiv, show that slightly under 6% of the population had antibodies to the virus and had likely previously had COVID-19 by the end of June, an estimated 3.4 million people. London had the highest numbers at over twice the national average (13%), while the South West had the lowest (3%).
Key workers in care homes and health care were among those most likely to have already been infected with the coronavirus. And Black, Asian and minority ethnic (BAME) individuals were between two and three times as likely to have had COVID-19 compared to white people.
(Continue . . . )

And finally, a lengthy press release from the UK government can be accessed at:

Largest home antibody testing programme for COVID-19 publishes findings
Findings published by Imperial College London today suggest that 6% of the population in England, around 3.4 million people, have been infected with COVID-19.

There remain an awful lot of unknowns here.
What is clear is that roughly 94% of the British population have either yet to be infected, or were infected and did not produce detectable antibodies, leaving the UK - and likely the rest of the world -  a very long way from achieving anything close to herd immunity.
Posted by Michael Coston at 7:30 AM