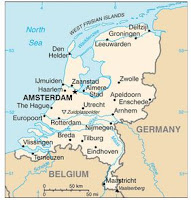 Last May, in Netherlands: Two Foxes Test Positive For (non-Zoonotic) Avian H5N1, we looked at a report from Wageningen Bioveterinary Research (WBVR) in the Netherlands where they found two foxes in the province of Groningen that had been infected with avian H5N1.

While we have seen many instances of dogs, cats, and other peridomestic mammals infected with the infamously  zoonotic `Asian' H5N1 virus, it is far more unusual to see symptomatic infection with the European avian H5Nx virus in mammals (a notable exception being seals).

That is . . until recently.  In March of this year the UK's DEFRA announced:

Other events in England

H5N8 influenza of avian origin was detected as part of routine wildlife surveillance in 3 seals and a fox that died at a wildlife rehabilitation centre in England. Wild birds undergoing rehabilitation in the centre are believed to have been the source of the infection. There was no evidence of spread from the premises.

And more recently - less than a month ago - in Germany: Media Reports of Dead Seals Found Infected With Avian H5N8, we revisited this topic.

Over the summer we've seen calls from a number of researchers to take the continued evolution of HPAI H5Nx viruses seriously.

All of which brings us to a research letter, published yesterday in the EID Journal, that sheds additional light on these HPAI H5N1 infections in foxes, including unusual neurological presentations.

We've seen some clades of the Asian H5Nx virus exhibit neurotropism, such as in a Canadian Nurse who returned from China in late 2013 (see CJ ID & MM: Case Study Of A Neurotropic H5N1 Infection - Canada), where the authors wrote:

These reports suggest the H5N1 virus is becoming more neurologically virulent and adapting to mammals. Despite the trend in virulence, the mode of influenza virus transmission remains elusive to date. It is unclear how our patient acquired the H5N1 influenza virus because she did not have any known contact with animals or poultry.

But these Asian clade 2.3.2.1c-like H5N1 viruses are genetically different from the European H5Nx clade 2.3.4.4b viruses, making these sorts of neurological presentations unexpected.

We detected infection with highly pathogenic avian influenza A(H5N1) virus clade 2.3.4.4b in 2 red fox (Vulpes vulpes) cubs found in the wild with neurologic signs in the Netherlands. The virus is related to avian influenza viruses found in wild birds in the same area.

On May 10, a red fox Vulpes vulpes cub (cub 1) displaying abnormal behavior was found in Bellingwolde, the Netherlands, and taken into care of a wildlife rescue center. Upon entry, the 6- to 8-week-old cub was slightly dehydrated and showed at intervals of <30 minutes lip retraction, rapid opening and closing of mouth, excessive salivation, skin twitching, head shaking, and body tremors (Figure; Video).

The cub first seemed to improve, but on May 12 it reacted aggressively when touched. Subsequently, we observed difficult swallowing and labored breathing. The cub seemed blind and stopped eating. As the situation further deteriorated, we humanely euthanized the cub on May 16. On May 13, the center received another 6- to 8-week-old red fox cub (cub 2) found ≈900 m from cub 1. Cub 2 was hypothermic and dehydrated. It had seizures and died overnight.

Retrospectively, we concluded that the mother of the cubs was likely a vixen found walking circles on May 10, ≈975 m direct distance from cub 1 and ≈90 m from cub 2. The vixen reacted very aggressively to capture, responding to sound but blind. The vixen had a fresh elbow fracture, probably caused by a road traffic accident. We humanely euthanized her the same day and sent her carcass for destruction.

Although rabies lyssavirus is unlikely in the Netherlands, European bat 1 lyssavirus is endemic in serotine bats (Eptesicus serotinus) (1). To exclude lyssavirus infection in the fox cubs, we performed a direct fluorescent antibody test on smears of brain tissue in accordance with World Organisation for Animal Health (OIE) protocol (https://www.oie.int/fileadmin/Home/eng/Health_standards/tahm/3.01.17_RABIES.pdf). Test results were negative.

Subsequently, we tested brain samples for avian influenza virus by using a PCR detecting the influenza A virus matrix gene, followed by the subtype-specific H5-PCR on the hemagglutinin gene, as described previously (2). The samples from both cubs tested positive (Table), and we subtyped the virus as highly pathogenic avian influenza (HPAI) influenza virus A subtype H5N1. We isolated the HPAI H5N1 virus from the brain of cub 1 by inoculation of the samples into 10-day-old embryonated special pathogen–free chicken eggs.

During April–May 2021, large numbers of dead barnacle geese (Branta leucopsis) were reported in the northern part of the Netherlands, and later other species of waterfowl and birds of prey were also found dead. A selected number of dead wild birds were submitted for AI diagnostics and tested positive for HPAI H5N1 virus. We performed whole-genome sequencing of the HPAI H5N1 viruses found in wild birds and the 2 foxes as previously described (3) and conducted genetic and phylogenetic analyses to study the relationship between these viruses.

The HPAI H5N1 viruses detected in the foxes were not related to zoonotic H5N1 strains infecting humans in Asia and did not contain any known zoonotic mutations (data not shown). The sequences of the viruses detected in cub 1 (GISAID [https://www.gisaid.org] accession no. EPI_2194218) and cub 2 (GISAID accession no. EPI_2194219) were identical; the closest related virus was identified in a white-tailed eagle (Haliaeetus albicilla) near the village of Noordlaren.

These 2 cases of infection with H5N1 clade 2.3.4.4b virus in wild red fox cubs underscore the need to raise awareness that HPAI viruses are not only zoonotic but also infect other mammal species. HPAI infection should be on the list of differential diagnoses for animals that have signs of respiratory or neurologic disease. The detection of virus in the brain suggests systemic infection of the cubs. The clinical signs were largely consistent with those reported in other natural infections of carnivores with HPAI H5 subtypes (4–7).

Whether the fox cubs were infected through the parents or by eating infected bird carcasses is unclear (cubs start eating solid food at 4 weeks of age). Carnivores are known to be at risk for avian influenza virus infection upon ingesting infected birds (4,5,8). We did not test for virus shedding in these cubs, but virus shedding has been observed in experimental infection of 6- to 10-month-old red foxes with HPAI H5N1 clade 2.2 virus (8).

The United Kingdom reported infection of a red fox and seals in an animal shelter with a related HPAI H5N8 clade 2.3.4.4b virus (9), and Russia reported infection in poultry workers (10). These findings suggest that HPAI H5 clade 2.3.4.4b viruses may sporadically transmit from birds to mammals, including humans. Virus evolution and adaptive mutations must be closely monitored to rapidly identify viruses with increased zoonotic potential.

Dr. Rijks is a postdoctoral researcher at the Dutch Wildlife Health Centre in Utrecht, the Netherlands. Her primary research interests are wildlife diseases and epidemiology.

Of course, neurotropic or not, unless and until H5Nx gains the ability to transmit efficiently between humans, it poses a very low public health threat to the general public.  Those who have close contact with poultry, particularly during epizootics, would likely have a slightly higher risk.
With the fall migration season rapidly approaching (see Taiwan & South Korea Both Warn On Fall Arrival Of Migratory Birds), we'll be keeping a close watch on any further signs of mammalian adaptation of HPAI H5.
Posted by Michael Coston at 8:09 AM