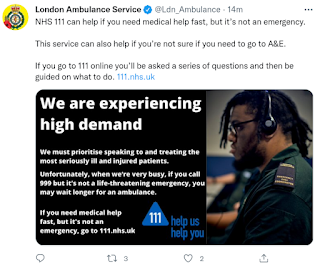 Between the continued spread of COVID, concerns over the return of influenza and other respiratory viruses this winter - and a growing backlog of delayed routine or elective medical treatments during the pandemic - there are grave concerns over how well England's NHS will cope this winter (see UK: NHS Confederation - Enact ‘Plan B plus’ to avoid ‘stumbling into winter crisis’).

Denmark: Health Authority Warns On Potential Overwhelmed Hospitals This Winter Due To COVID/Flu

No matter where you live, or what the current level of COVID or flu activity currently is in your vicinity, there is a very real chance that your local health delivery systems will be severely challenged this winter (see The Realities Of Crisis Standards Of Care).

While well off the peak COVID numbers of last winter, during this past October England's NHS set two unwanted records; the most 999 (emergency) call responses in their history, and the most A&E (emergency room) visits for the month of October.

This statement from NHS England, after which I'll return with a postscript.

NHS 999 services had their busiest ever month in October as staff answered a record 1,012,143 calls, new figures have revealed today.

Major A&Es treated over 1.4 million people during October – the highest ever for the month and third highest of all time.

The health service carried out 1.9 million diagnostic tests and 1.3 million patients started consultant-led treatment during September, that was compared with 1.7 million tests and 1.1 million treatments in the same month last year.

Patients on the waiting list are prioritised based on their need, and, at the end of September, were waiting an average of less than 12 weeks for elective care, compared to a high of 19.6 weeks on average in July last year.

The increase in activity came as NHS 111 also saw demand increase to an average of 63,000 calls a day in September, up almost 2,000 a day on the previous month.

Professor Stephen Powis, NHS National Medical Director said: “With the highest number of 999 calls ever answered for a single month, the busiest October on record for major A&E and the rollout of boosters as part of the successful NHS vaccination programme, there is no doubt pressure on the health service remains incredibly high.

“But despite high demand, NHS staff are going above and beyond to see more patients and deliver millions more tests, checks, treatments and operations.

“Increasing numbers are coming forward for treatment and this is expected to go up, but it remains really important people do not delay seeking help from the NHS if they feel unwell.

“Anyone needing help should come forward through NHS 111 Online so that staff can help you with the best option for your care, and it is as important as ever to get your lifesaving COVID and flu jab, to protect you this winter”.

The NHS booster roll out continues to accelerate with over nine million top up jabs delivered in just over seven weeks and the largest ever flu campaign is also underway with tens of millions eligible for the free flu jab this winter.

To protect each other and the NHS this winter, people should get their booster jab as soon as they are eligible, or book online in advance if it has been five months since your second dose.

People seeking medical advice can use NHS 111 Online as their first port of call. The website can advise people on self-care, where to go for help based on their symptoms, and help with prescriptions.

In an emergency people should always dial 999 for immediate medical support.

There are currently 6,961 patients in hospital with COVID and in all hospitals in England have now treated more than 450,000 patients with the virus.

Putting aside the `accentuate the positive' tone of this press release, for most EMS services November through January are the busiest months (see ‘Tis The Cardiac Season), making a historic number of NHS 999 calls in October an obvious concern.

Three months ago, in Through A Scanner Darkly, when Florida was seeing their late summer COVID surge, I described the long wait times for ambulances, and for hospital beds, during what is normally pur slowest month of the year for Florida EMS.

While our COVID activity has diminished considerably over the past couple of months, it is picking up in other parts of the country, and could easily return to Florida with a vengeance later this winter.  Adding to the concern, we are already seeing reports of influenza's return (see More Early Reports Of Seasonal Flu Activity (Florida)).

While the future is unknowable, this is an unusually early appearance of flu - and given our collective lack of exposure to flu viruses over the past 18 months - it could seriously complicate our COVID response this winter.

All reasons why getting the flu shot, on top of the COVID vaccine (or booster), should be on the top of your holiday to-do list, and any additional steps you can take to reduce your risks of illness (face masks, hand hygiene, avoiding crowds, etc.) or injury, should be seriously considered.

Posted by Michael Coston at 6:21 AM